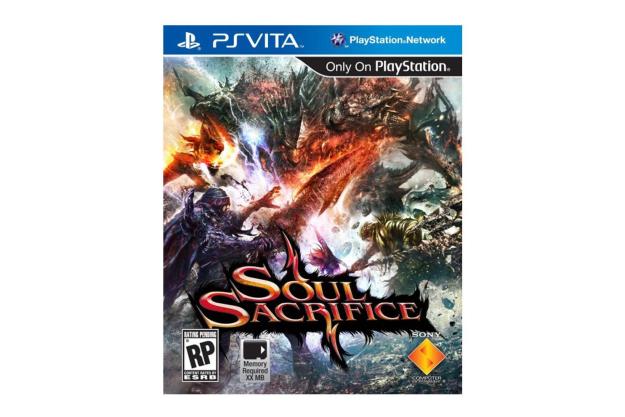 “Soul Sacrifice’s mythology and world are as distinctive as they are cruel and unpleasant.”

Soul Sacrifice makes me worry about Keiji Inafune. The first game from his fledgling studio Comcept is also his first large scale work since leaving Capcom in 2010. Inafune’s work from 1987 on practically defined Capcom. He’s the man behind Mega Man, the art in DuckTales and the original Street Fighter, the producer on everything from Ace Attorney: Phoenix Wright to The Legend of Zelda: The Minish Cap.

Bright, colorful, and ebullient are the words that go hand in hand with Inafune’s best work. Even at his darkest, in games like Onimusha and Dead Rising, things are never as bleak, desperate, and sad as they are in Soul Sacrifice. Five minutes with the game makes you want to take him out for a drink and see if he needs to talk about how things are going. The game’s primary currency is tears; it’s that kind of party.

As lonesome and sanguinary as the game is, it also feels creatively invigorated in a way that no Inafune game has in years. Soul Sacrifice’s mythology and world are as distinctive as they are cruel and unpleasant.  It borrows some scaffolding from another Capcom craze that started during Inafune’s time with the company, and it suffers as a result. On the whole, however, Comcept’s debut is a standout on the PS Vita.

Soul Sacrifice shares some foundational aspects with Capcom’s long running Monster Hunter series. As in that game, your time is spent taking on small creatures in a variety of arenas and collecting resources. You then take on enormous monsters that require a hefty amount of time to kill, enlisting AI partners or playing online with actual people. That’s it as far as similarities go. Everything else, from the way the monsters behave to the world that they inhabit to the way fighting works, is wholly unique in Soul Sacrifice.

There are two types of people in the game’s world: regular humans and sorcerers. Sorcerers are terrifyingly powerful thanks to their magic powers, but they’re also few in number. Regular people tolerate them because they’re the only ones that can rid the world of the countless slavering beasts – who themselves used to be regular people, animals, and sorcerers – wandering the land.

As the game reminds you over and over again, a sorcerer lives to murder. The tools of their trade are offerings, different items that get used up in order to summon a skill. Bones let you summon up an extension of your arm to pummel monsters, while herbs are sacrificed to heal yourself and your party.

Sacrifice is at the heart of all your abilities. Black Rites, the game’s “super moves,” can save your life but they’ll also warp your body. The first rite your receive, Infernus, can set enemies on fire but it also burns off your skin, lowering your defense. Even the most basic skills have this give and take.

The only way to raise your attack skills or health is by “saving” or “sacrificing” enemies, which you do by walking up to a downed creature and holding one of the Vita’s triggers. On screen, you see your hands in front of you, covered in blood, waiting to make the choice. More often than not, choosing one diminishes the other. Sacrifice a bulbous two-mouthed cat, your power goes up, your health goes down, and the world is rid of a monster. Save it, and your health goes up. You’ll also have rescued a kitty.

A Soul Worth Saving

There’s not a lot of variety in Soul Sacrifice. While the enormous freaks you spend your time fighting are all memorably gross, you fight most of them over and over again in the same fourteen arenas. Fighting is just about the only thing that you do in these locations. There are side missions where you’re trying to find lost bits of memory or an item, but these tasks require little more than your Mind’s Eye ability – which highlights enemies and points of interest when you press down on the D-pad – and a willingness to wander.

Even with this simple framework, Sacrifice has enough soul to keep you gripped. The sorcerer in your control is actually imprisoned, locked in a filthy cage with a terrifying talking book named Librom while awaiting execution at the hands of a power-mad sorcerer named Magusar. Everything in the game takes place as you thumb through Magusar’s unusually gregarious, living journal. You play through each glimpse into the sorcerer’s past, in the process unlocking the power needed to maybe defeat him and rid the world of his tyranny.

Librom is more than just a menu. There’s a complete history of the game world hidden in his pages, presented in murky animated text on the Vita screen. Each story level and side quest unfolds as a chapter in the journal, and none of them have a happy ending.

Take the first chapter of the “Mad Chronicle,” the story of Sortiana. You fight alongside the sorceress against monsters while she speaks all along about being tortured by her duty. The enemies you face are also haunted figures, plagued by vanity and by their choices in life. Hearing a ghostly voice scream about going crazy as they lose their youth and beauty transforms the rote brawling into something more than just a grind.

Soul Sacrifice, with its ugly, sad world and its sardonic sentient book, recalls another imperfect role-playing game from recent years. Cavia’s Nier also failed to distinguish itself with expert play, but soared thanks to its emotional depth and feeling. Inafune and Comcept’s debut is exhausting because of its rote play and oppressive atmosphere, but it’s also a singular work. At it’s best, it becomes a singularly moving experience. The years seem to have been hard on Inafune, but hopefully the sacrifice of his old games’ brightness here will yield even more fine work going forward.

Warzone 2.0 Season 2: release date, Ashika Island map, and Resurgence mode
The best PS5 controllers for 2023
The best upcoming PC games: 2023 and beyond
The best upcoming PS5 games: 2023 and beyond
With Valiant Hearts: Coming Home, Netflix finds its video game voice
The best guns in Dead Space
The Crew Motorfest brings a racing festival to Hawaii this year
The best skills to inherit in Fire Emblem Engage
Dead Space: how to fix the centrifuge
How to fast travel in Forspoken
Star Wars Jedi: Survivor will now release in April following delay
How to get the Silver Card in Fire Emblem Engage
One Piece Odyssey’s great ending would have made for a perfect anime arc