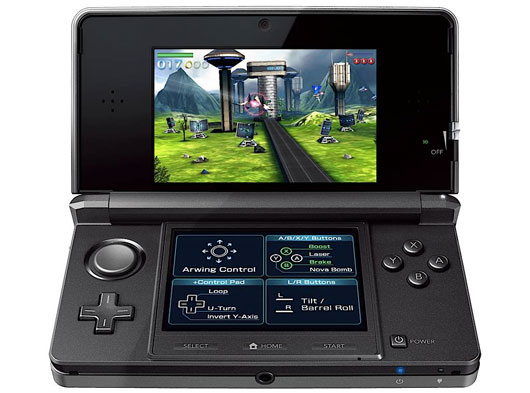 Here’s another update to a game I’ve never played before (you can go ahead and insert your expressions of disbelief right… here): Star Fox 64 3D. In this context, the one thing that’s front and center in my mind is that the screenshots I’ve seen don’t do it justice. A lot of things lookreally good in this game, particularly in 3D.

On display at the show was the Score Attack mode, letting you choose one of three missions to go through, and a four-player multiplayer mode. I tried the former first, exploring various control options. The much-touted gyro controls, which let you control your ship by moving the 3DS around in space in front of you, proved to be both rather awkward and annoying as I tended to move the 3D out of focus. I eventually ended up switching the gyro off first and switching to the slide pad (which you still needed to use anyway to pull off many moves), then inverting the Y-axis, before it came together.

What I really liked, though, was the multiplayer mode. Likely in the interests of keeping things fair, gyro mode was locked on in this game. But in the more open area of the multiplayer arena (as opposed to the largely on-rails nature of the missions), I found it worked substantially better to use the gyro to move around—far less tight quarters made for a much better experience with the motion controls.

Multiplayer has one other feature: it will use the 3DS’ internal camera to take really grainy, low-fps shots of the player as he plays the game. It proved to be really difficult to make out anything on the tiny photos that were floating around the arena as we played; only when the game took snapshots with a victory/loss event was it possible to make out any detail, and even then it was really only at the conclusion of the game that I felt I could pay enough attention to them. Not exactly a game-changer.

After playing Kid Icarus: Uprising last night with its stylus aiming, the designed-for-analog-stick aiming mechanic of Star Fox feels kind of archaic; I don’t think I’d see myself particularly interested in pursuing the single-player campaign in this game. But I wouldn’t hesitate to jump into a multiplayer game—even if I wasn’t winning. It turned out to be a lot of fun.

With E3 2022 canceled, these are the summer gaming events to watch
The 25 best Nintendo 3DS games
Grab these Nintendo 3DS games before the eShop closes
Nintendo is ending Wii U and 3DS eShop service
The best upcoming PS5 games: 2023 and beyond
The best upcoming PC games: 2023 and beyond
The best PS5 controllers for 2023
Warzone 2.0 Season 2: release date, Ashika Island map, and Resurgence mode
Here’s what E3 2023 could look like without Sony, Nintendo, and Microsoft
Marvel Snap’s Friendly Battles set a new bar for its post-launch support
WWE 2K23 improves the wrestling sim with subtle tweaks and a bit of chaos
Meta Quest Pro VR headset is $400 off (and save on Meta Quest 2)
How to change classes in Fire Emblem Engage