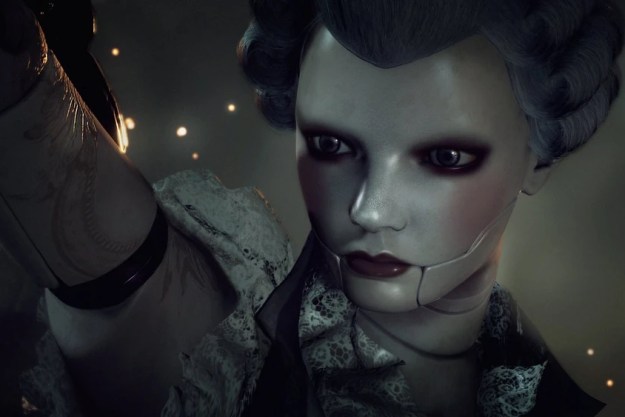 “Steelrising has some lofty ambitions, but poor execution slays this potentially innovative Soulslike.”

When it comes to developer Spiders, the studio has yet to land a hit that matches its ambitions. Technomancer was largely viewed as a unique story tied saddled with poor gameplay and technical performance. Greedfall was a slight step up, but for the most part, had the same issues. While many are waiting to see if Greedfall 2 can iron out those technical issues and live up to the BioWare RPG mold it looks to improve on, Steelrising has bubbled its way up in the background. Its trajectory is the same story for Spiders, though.

This odd experiment feels almost intentionally left in the dark. It’s a Soulslike, but with perhaps the most interesting premises any of these imitators have had yet. It is set in 1789 in Paris during an alternate history where King Louis the XVI gained control over an army of automatons, quelling the revolution that would eventually lead to his execution in our world. We play as the lone intelligent automaton seeking to stop his rampage.

I see potential in that premise, especially from a team whose prior games had little but the story to call great. The unfortunate reality, however, is that for every good idea Steelrising has on paper, nearly none of them are realized in the final product. Without that, uninspired gameplay and technical performance issues make this another uneven release for a studio that’s always sitting on the verge of success.

The nugget of a good story

Everything that interested me about Steelrising‘s plot and setting came from pre-release material describing the game rather than the game itself. The main character, Aegis, is an Automat (the shorthand used for automaton in this universe) who is charged with protecting Queen Marie Antoinette. However, Aegis is different from other Automats in that, for reasons no one seems to understand but are painfully obvious very early on, she can speak and think for herself.

That last point is stated but is not shown, and that’s a common thread in Steelrising. Aegis, for nearly the entirety of the game, never does anything of her own will. Her goals are always following orders without question, completely betraying what supposedly makes her different. You get some dialogue choices when speaking to some characters, but these just amount to what order you want to ask questions in. Only near the end of the game are there any actual decisions to be made, but by then I had checked out of the narrative.

That’s because of how the story is delivered. Your primary mission is to find the man who created the Automats to try and find a way to stop them, but the path to him is a drawn-out series of sidetracks. When I didn’t find him at the first location, I learned about someone who might know where he is. They knew of someone else who is a friend of someone who might know. This process repeats itself, introducing so many characters for such a brief time, that it’s hard to keep track of them all.

Everything that interested me about Steelrising‘s plot and setting came from pre-release material.

The cast is made up of historical figures and major players in the French Revolution and prior knowledge of them is required to really get the game’s impact. I was certainly willing to learn about these figures and their importance, but the pace at which the game introduces them before tossing in even more names to learn only serves to muddy the plot. Successful alternate history games such as Wolfenstein: The New Order introduce key historical players, without needing a history lesson to understand what’s happening. Steelrising struggles to nail that balance.

Soulslikes can get away with an obfuscated or poor story so long as the gameplay, enemies, and bosses are compelling enough, and Steelrising tries its hardest to carve out a small foothold in that space. The basics are ripped right from any other game of the genre; you have a light and heavy attack, Bloodborne-style dash, and item bar. It does bring one neat wrinkle in an active reload for your stamina where you can hit a button as a second meter drains to restore that much stamina right away. To add some risk, you’ll suffer some Frost damage for doing so.

Frost, as well as Flame and Electricity, are the game’s three attack elements but are too easily exploitable. Some weapons can apply them to each hit, and all need to be built up on an enemy or Aegis before they take effect — either freezing in place, causing burning damage over time, or taking extra damage via shock. While some enemies and bosses are resistant to some of these more or less than others, none are immune. That means I could, and did, use a ranged Frost weapon to freeze a dangerous boss, get in close to do my melee weapon’s special attack once or twice, then back off to repeat the process with zero danger. I could’ve beaten every enemy and boss in the game this way if I wanted since there was no downside and ammo is plentiful.

Steelrising does attempt to make some key strides forward for the Soulslike genre.

Except for the main bosses, there’s really no need to cheese normal encounters. The enemy AI feels like it’s from the 18th century in how stiff and stilted it is. At first, I was making mistakes because I wasn’t expecting it to be so slow — in the same way as playing a Guitar Hero game on easy after playing on hard becomes challenging to adjust to. In almost every scenario the enemy will spot you, rush in, pause, line up for an attack, and then begin their animation. Once I figured out this pattern and stopped playing reactively, no enemy posed much threat. Even running away is dead simple since they simply can’t follow you up or down any ledge (and even struggle with stairs at times).

Steelrising does attempt to make some key strides forward for the Soulslike genre, making some quality-of-life adjustments that some want out of FromSoftware games. Take the Assist Mode options, for instance. These allow you to set how much damage enemies deal between 0% and 100%, whether you drop your XP on death, how fast your stamina recovers, and an easy stamina cooling mode. While not the most expansive list by any means, I will always welcome more options to make it easier for people to experience a game they otherwise couldn’t, especially when there are no other difficulty modes to choose from. The issue with this is that the game punishes you for using these assists by disabling certain Trophies when you turn them on, implying that these assists are not the “right” way to play.

The game does have a very detailed journal, compiling all kinds of information such as a quest log plus details on all the characters. It also has a compass item you can put on your quick-select bar that will display objective markers on your screen for that zone until you swap to your healing oil or another item. These are exactly the types of compromises many wished even the mighty Elden Ring had, though I can’t give them complete credit because of how tiny the journal’s text is and for the fact that the compass’ waypoints often bugged out and lead me to random points on the way to my objective.

That compass, when functional, isn’t really necessary unless you stop for a day or two while going through one of the zones. Unlike a FromSoftware Souls game, the levels of Steelrising are straightforward and not visually distinct. There were never any landmarks or vistas I could orient myself around, or even admire much. You have dilapidated streets, hedge gardens, and a few interior types for the majority of the game. Whenever there was a side quest I couldn’t track or an optional area I gained the ability to access later, I had no way of recalling where or how to get there due to how almost no zone had any distinct quality or personality. Every level is almost completely flat, and nearly every shortcut is a locked gate just a few feet from each checkpoint.

Navigation didn’t feel right upon first touch, like Aegis was riding a unicycle. She feels much more responsive in combat, but otherwise, I always felt like making precise movements was a roll of the dice. That’s further complicated by some platforming elements that killed me more often than bosses did. You do learn three new moves to navigate — a grappling hook that brings you to set points in the environment, an airdash, and a kick that breaks down very specific walls and gates — but none of them drastically change how moving through the world feels. In fact, the air dash makes the already difficult platforming even trickier.

I didn’t expect a buggy experience, as I only encountered one small glitch where a character’s voice lines were cut off except for the final word in their sentence in my first couple of hours. However, things only got progressively worse the more I played. Aegis would appear floating a few feet off the ground in cutscenes, enemies I killed would spring back to their idle standing animation as soon as they fell, and they even occasionally glitched through floors or walls when hit.

If you’ve played a game by Spiders, Steelrising is the same story.

Even those, if they were rare, wouldn’t be too bad. What can’t be overlooked are the times when the frame rate tanked for no discernible reason, even completely freezing for five or more seconds at a time and convincing me the game had crashed before grinding out another frame or two. This happened about every hour towards the second half of the game, and while it did clear itself up after one or two minutes, made the game unplayable during that time.

I found myself stuck in the menu at one point, watching helplessly as an enemy I didn’t notice patrolled by, spotted me, and got a free attack in before the game finally read my inputs to exit the menu. Another instance occurred where a prompt to speak to an NPC hiding in a building, who might’ve had a quest for all I know, simply fell through the world (I assume the model the prompt was tied to glitched through the floor and the prompt fell with it). Perhaps the worst, though, came during the penultimate boss battle. After bringing the boss down to less than 10% health, it did a rolling move and simply clipped through the arena wall and wouldn’t come back, forcing me to quit and start the entire fight over.

If you’ve played a game by Spiders, Steelrising is the same story. It’s a game with lofty ambitions, aiming to compete with the best in the genre, but ultimately lacking the resources and polish to pull it off. I admire a studio stretching to push beyond its perceived ability, but working within limitations is crucial. If this is a path Spiders is truly committed to taking, I hope it can find its footing in its next project. The studio has loads of promise with its RPG experience and its ability to lay solid groundwork for action combat. But Steelrising feels more like a prototype than what the studio is truly capable of.

Steelrising was reviewed on PS5.