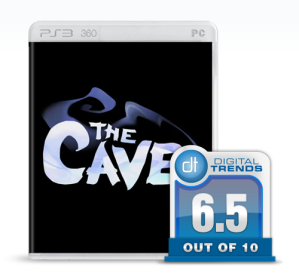 Don’t you love it when a video game actually delivers on 99-percent of the great ideas it was founded on? You can feel that peeking through frequently as Double Fine’s Ron Gilbert-penned adventure, The Cave unfolds, but all of that potential is ultimately swallowed up by the titular underground network’s inky blackness as you explore it a second and then a third time.

The Cave features a 2D platforming-like aesthetic, but it is fundamentally an adventure game. Death and failure are non-concerns; the emphasis is placed instead on figuring out which items to use in which places as you solve a series of oddball puzzles. An early challenge involves using a hot dog obtained from a hot dog vending machine (naturally) to lure a cave monster into place beneath a crane, giving another character time to activate the machine and lift the beast – and, more importantly, its teeth – safely out of reach. First you’ll need to find the vending machine, then a fuse to power it, then a bucket to catch water preventing you from collecting said fuse, then… you get the picture. Adventure game.

The twist is that you’ve got a cast of seven characters to choose from as you build your party of three spelunkers. Each character has his or her own story that you’ll discover when you reach and play through that person’s uniquely tailored section of the cave. These character-specific areas are inaccessible unless you have that person in your party, so you’ll only ever visit three unique locations on a given playthrough, and each playthrough takes roughly 2-3 hours. To see all seven, you’ll have to repeat at least one character’s content. You’ll also have to play through the full game three times, which means re-visiting entire multi-stage puzzles that don’t change at all from playthrough to playthrough.

You can see where there was once probably a killer idea here. Perhaps Double Fine originally had more characters envisioned for this adventure. Perhaps the challenges put before you from game to game were meant to change based on who you brought in during your previous playthrough. Each character is defined in part by a so-called Object of Desire, and there’s some carryover in second and third playthroughs that see your chosen party gaining admittance to the Cave by tracking down the previous party’s lost Objects of Desire.

It feels half-baked though. Like there’s the shadow of a good idea here that has now been painted over by the demands of a development schedule. It’s not fair at all to pan a game for what it doesn’t include, but The Cave feels like it was meant to be much larger than it is. There’s nothing at all in the game to justify forcing players to revisit previous puzzles again and again, both in terms of the gameplay and the story. Different character abilities offer slightly different approaches to solving each one, but it’s not enough to stave off the boredom of having to traipse through multiple unchanging puzzles just to get to the new stuff.

All that said, it’s hard not to love The Cave at least a little. Gilbert’s superior writing talents are on full display, whether its the booming voice of the cave that narrates your adventure, or hilarious ambient dialogue. You’ll run all through an underground rocket launch facility during the Scientist’s story as a recorded voice repeatedly asks you to “insert navigational guidance system” to make the rocket go. Come to a certain point and you’ll learn that the navigational guidance system you’re meant to insert is a screaming, spacesuit-clad chimp.

Also, there are New Grog vending machines. Just so you know.

The puzzles are all very well-designed too. None are as obtuse as those of yesteryear’s adventure games, though red herring puzzle items are scattered everywhere. You’ll simply have to apply a little common sense to solve everything, always being mindful of the clues that the game feeds you at regular intervals. It’s easy to get stumped only to later realize — with a headsmacking “How did I miss that?!” — what the game wants you to do. The character-specific puzzles are the strongest, both because of the unique locations that you’ll visit and the novelty of playing with each character’s unique skill.

The Cave is an experience built on diminishing returns. Your first runthrough is the best: everything is new, the characters feel fresh, the puzzles present a fair yet acceptable level of challenge. You stumble a bit on your second time, waiting for something in those familiar bits to feel different. It never happens, and you finish playthrough #2 dreading your third attempt. You then abandon your third run part of the way through, completely turned off after having jumped through the same set of hoops a second time. If you took three fresh characters along on your first two attempts, you’re stuck with a pair of replays on your final run.

It’s too bad. The Cave has a lot of promise, and it’s absolutely worth playing through a first time. The controls are on the clunky side, but you’ll likely not notice or care as you see all of the Cave’s sights as a fresh, first-time experience. Gilbert’s creations are as hilariously deranged as they’ve ever been, and the titular underground network seems to be just as much a rendering of his brain’s interior as it is an allegory on Hell, purgatory, and paying for your worldly sins in the afterlife. There’s a lot of quality here, just don’t expect to be rewarded for pushing to see everything.

The best co-op games of all time

The best Pokémon games, ranked from best to worst