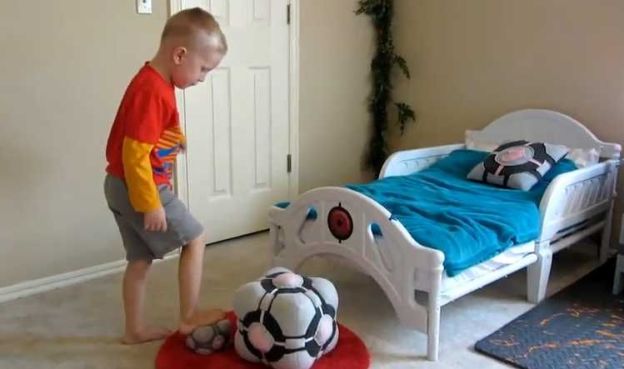 There’s really not a lot of introduction required for this video of Vector Farr taking you on a tour of his Portal-themed bedroom.

Basically, instead of dinosaurs, construction vehicles, or spaceships, Farr has a bedroom filled with portal panels, plush companion cubes, propulsion gel, and even a GLaDOS camera silently watching over him above his Portal-themed bed. And the best part is that he seems genuinely excited about it — so you know it’s not just his parents pushing their own love for the popular game on him.

And while some might question the benefits of Farr’s enthusiasm for the game, there’s reason to believe his Portal obsession might just might mean he’ll grasp the complex nuances of physics (and advanced robotics) way before the rest of us.

It’s also worth noting that Farr’s bedroom isn’t the only spot in his house to receive a Portal makeover. There’s also a video of him showing of his Portal-themed bathroom, too.

Let’s face it: not only does Vector Farr have a cool name, his room is a lot cooler than my old treehouse, too.

Battlefield Portal is a perfect match for the series’ ideology