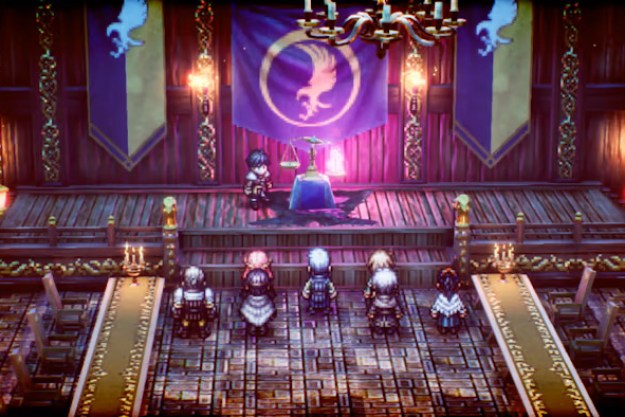 Triangle Strategy is a “laundry-folding game.” That’s a term I use to describe games that require so little hands-on time that you could fold and put away your entire laundry load in the time it takes to get from one gameplay section to the next.

When I use that term, I usually don’t mean that as an insult. On the contrary, I often love visual novels that I can play while eating dinner like I would with a movie. The problem is that Triangle Strategy isn’t a visual novel, or at least, that’s not supposed to be its appeal. The new strategy RPG from the team behind Octopath Traveler is a tactics game meant to scratch the same itch as Fire Emblem or Advance Wars. That genre usually means players are in for long battles that require lots of active decision-making and grid management.

So why was I folding so much underwear during it instead?

Triangle Strategy features strong tactics gameplay delivered with the same striking retro visuals that made Octopath Traveler stand out before it. It’s just a shame that you have to sit through countless hours of lifeless dialogue from interchangeably vague characters to get there.

The comically titled Triangle Strategy is a tactical RPG that takes place in the middle of a trade war between three countries on the continent of Norzelia. Players control a traveling band of troops, led by the generically stoic Serenoa, as they travel the continent looking to untangle a dense political conflict that’s been raging for decades. As you’d expect, that leads to lots of battles.

Turn-based tactical combat is the game’s primary strength. Much like Fire Emblem, players strategically move troops around a grid and defeat opposing forces by selecting attacks from an RPG menu. Rather than using generic troop classes, players get a set roster of heroes, each of which has its own special moves. Roland is a horse-riding lancer who can stab through multiple enemies, while Frederica is a spell-casting fire mage that can set squares ablaze. Fights have more personality as a result and don’t just feel like faceless battles.

What makes Triangle Strategy’s combat stand out is its emphasis on careful troop placement. Rather than moving characters around at random, players need to protect each character’s back, or else they’ll leave themselves open for a critical blow. That creates a satisfyingly strategic loop that rewards clever defensive formation rather than reckless movement.

As an added twist, players can get an extra attack off on an enemy if they put a troop on each side of them. At times, it reminded me of Into the Breach. In that game, players are almost solving a puzzle by putting their mech units in the proper place every turn. Similarly, I felt like a military mastermind anytime I managed to box an opponent in with a few thoughtful moves.

What makes Triangle Strategy’s combat stand out is its emphasis on careful troop placement.

In fact, the game properly incentivizes that kind of play. Players get a special currency every time they do a special action, like performing a backstab or attacking an enemy from high ground. Those points can be used to buy new moves, upgrade materials, and extra lore. The more I engaged with each combat nuance, the more options I got to tinker with. That made me eager to play smarter.

Triangle Strategy plays most of its cards early. After a few chapters, nothing radically changes about battles. There are more characters and moves, but it doesn’t build on itself too much more. A few extra twists along the way would have helped keep fights fresh, but it’s a lean system with hardly any fat.

If Triangle Strategy mostly consisted of tight tactics battles, it would be a great addition to the genre. Unfortunately, that’s only one-third of the experience at best.

Instead, most of the game’s 30-hour runtime is spent in endless dialogue sequences (which should be unsurprising if you’re familiar with Octopath Traveler). A cast of underdeveloped characters droning in monotone voices spend long stretches of the game talking about Norzelia and its illicit salt trading. I’m all for dedicated world-building, but the conversations are unfathomably boring, like an exhaustive Ken Burns documentary on a niche historical crisis playing at quarter speed.

Usually, this is the part where I’d say “just skip it,” but that’s not exactly an option. Triangle Strategy will actively punish players who try to rush through conversations. The heart of the game lies in its “scales of conviction” mechanic, where players shape the path they take through the conflict by holding periodic votes. It’s a neat idea, one where players can gather gossip from villagers and use it to sway allies into voting a certain way.

That intel gathering happens in a dull exploration phase, where players (you guessed it) sit through more conversations. If they don’t talk to every single NPC in a town, there’s a good chance they’ll miss a key piece of information that locks off dialogue options in negotiations. I tried to leave one exploration phase early and was met with a game-over message for failing to trigger all the relevant conversations.

Any time the game introduces something that seems like it could lead to a battle, it’s just another way to package dialogue. There are “side stories,” but they’re just optional conversations. When I first saw a character episode pop up, I was excited, thinking that the game would introduce me to a new playable character through battle. Instead, they’re just expository introductions to new recruits with no interactive element. My Switch and TV screens routinely went into a darkened energy-saving mode as I stared at the screen, slack-jawed, listening to debates without pressing a single button.

It’s a shame because I like the concept behind Triangle Strategy’s choice-driven story. It’s a dense game that shows how difficult it is to run a perfect, moral nation when everyone else is constantly breaking the rules. I had to make some tense decisions in my playthrough that alienated allies and had long-term consequences.

I’m not even sure I can call Triangle Strategy a tactics game; it’s more accurately a dry visual novel.

I just wish that there was a better balance between fighting and chatting. Midway through the story, I hit a point where I encountered two hours of talking before getting to my next fight. I’m not even sure I can call Triangle Strategy a tactics game; it’s more accurately a dry visual novel. I hope you have a lot of t-shirts to fold, because you’ll need something to do with your hands.

I can’t shake the feeling that something is missing in Triangle Strategy. Pieces of the game feel absent, leaving several of its systems underdeveloped. There’s a notable lack of customization, for instance. Each character has a small, simple skill tree, but there aren’t many options to tweak them beyond basic upgrades. Units have two item slots for accessories, but their weapons and gear are static. That limits how much players can really build a strategy.

There’s hardly any content outside of the main story either. There’s an encampment where players can compete in a few “mock battles” throughout the game, but no side-missions. I wouldn’t normally mind that, but this is an RPG. A lack of extra content means there’s no real way to raise character levels outside of the story or grinding the handful of mock battles. Every time I got a new companion, I rarely ever used them since they’d enter at a low level and I’d have no way to get them up to speed.

It could have benefitted from more creative objectives, too. Most battles simply ask players to defeat every enemy on screen. However, the handful of fights that shake things up show that the developers had some better ideas in the tank. In the game’s best encounter, Serenoa’s crew needs to stop an invasion of their village. To do so, the allies rig traps around the town, which will burn down a building and kill enemies in the process. The village is permanently scarred after that, with villagers sadly wandering the streets displaced from their destroyed homes. More impactful mechanics like that could have added real stakes and emotional weight to the war.

Pieces of the game feel absent, leaving several of its systems underdeveloped.

Ultimately, the game’s aesthetic ends up doing most of the work here. Like Octopath Traveler, the gorgeous HD-2D graphics are the main attraction. Fans of retro RPGs will eat up every detailed environment. It’s just that we’ve seen this trick before and in a more playful fantasy setting. The novelty factor isn’t as strong, which made me focus much more on the flaws with this style of game.

Octopath Traveler ends up being a good judge of whether or not players will enjoy this. Did you like the visuals and RPG systems in that game, but felt like it was dragged down by drawn-out monologues? Triangle Strategy is the exact same story with an even greater imbalance between the pros and cons. I’m no tactical mastermind, but doubling down on a game’s shortcomings doesn’t seem like a winning strategy.

When Triangle Strategy is dishing out smart tactics gameplay, it’s a satisfying battle of wits. The emphasis on careful troop placement makes every move feel important. The problem is that players so rarely get to fight. A hyper-fixation on the inner politics of its world results in long swaths of monotonous dialogue with minimal interactivity. With thin customization, hardly any side-content, and a combat system that plays most of its tricks within the first few hours, it’s one battalion short of an army.

Fire Emblem: Three Houses is the best tactics game on Switch. If you want something a little more retro, Wargroove is a great choice.

The campaign will take you around 30 hours, with shockingly little of that spent in battles. There are multiple paths through the story for those who want to replay it after credits roll.

No. This will find its niche in nostalgic RPG players, but it’s hard to recommend this when there are so many better tactics games on Switch — especially when Advance Wars 1 + 2: Re-boot Camp is right around the corner.

Triangle Strategy was tested on a Nintendo Switch OLED in handheld mode and on a TCL 6-Series R635 when docked.