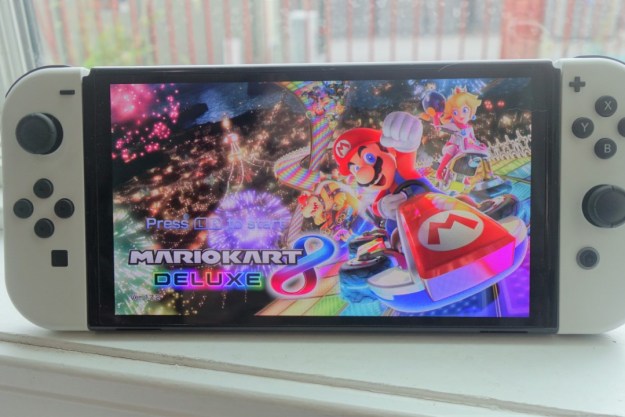 “The Nintendo Switch OLED may not be what players dreamed of, but it's undeniably a technical step up for the Switch.”

Much of the discussion around the Nintendo Switch OLED model has been about what it’s not, as opposed to what it is. From its initial announcement, fans were vocally disappointed about the upgrade’s lack of three main things: 4K graphics while docked, a resolution bump in handheld mode, and a battery boost. That left many to completely write the system off as an inessential midlife Switch upgrade instead of the version they’d envisioned.

So let’s talk about what the Switch OLED actually is: It’s a better version of the Nintendo Switch, unequivocally. It sports a bigger, brighter screen that makes the old Switch look washed out. That alone would be enough to make this a notable improvement, and it’s not the only new feature here. The question is whether or not it’s enough of a difference considering that the Switch is a four-year-old console that lags behind nearly half a decade of tech advancement in gaming. The answer is likely no, but it hardly matters when Nintendo is playing by its own rules.

The Nintendo Switch OLED tunes up an already great console with a better screen, cleaner audio, and a kickstand that puts the old Switch’s to shame. For those who prefer to play their games in handheld or tabletop mode, it’s an upgrade worth making if your Switch is aging. Those who play docked are left in the dust, though, making it a somewhat puzzling addition to the Switch family.

The one key difference you need to know about here is the console’s namesake OLED screen. Considering how uninventive the system’s name is, you’d have to assume Nintendo is hanging a lot of its hopes on that aspect. There’s a good reason for that, though: The new OLED panel is unquestionably better than the Switch’s dated LCD panel.

For starters, it’s bigger. While the regular Switch sports a 6.2-inch screen surrounded by a thick black bezel, the OLED stretches out to seven inches, making better use of the Switch’s real estate. It’s a noticeable difference, especially since video games tend to use the tiniest text possible when it comes to UI.

More importantly, everything is brighter on the OLED panel. You can see that clearly simply by booting up the home menu on an old and new console. The original Switch almost looks like it has a white haze over it, dulling colors ever so slightly. By contrast, everything is crisp on the OLED screen; it doesn’t feel like anything is lost in digital translation. In testing Metroid Dread on it, I swapped back and forth between my TV and the OLED in handheld mode. I quickly found that the image simply looked clearer on the OLED than it did on my aging TV. I opted to play the entire game portably as a result.

The new OLED panel is unquestionably better than the Switch’s dated LED panel.

For disappointed fans, a better screen was only half of what they were hoping for. The console does not feature any sort of resolution boost in handheld mode, which means it’s capped at 720p like its predecessor. A lack of 1080p sounds like a big deal on paper, but it ultimately doesn’t make much of a difference on a seven-inch screen. Instead, the OLED gives Nintendo’s games a boost where it really matters. A game like Mario Kart 8 Deluxe shines on the console, for instance, with its colors popping in all their vibrant glory.

I’m the kind of Switch player who almost exclusively plays in handheld mode, even if I’m at home. From that perspective, the new screen is a notable improvement for me. I wouldn’t have rushed out to buy one based on the spec sheet, but now that I’m using it, I can’t imagine going back to my old model.

The OLED’s other upgrades are more subtle by comparison, though they justify the $50 bump in price. For one, the system has a completely redesigned kickstand, which makes the old Switch’s flimsy plastic one look like a cruel joke. The entire back bottom half of the console folds out and stays in place at any angle. It goes so far back that the console can almost lay flat, with a slight incline. The Switch feels way more stable in tabletop mode, making the dream of playing games on a plane feel much more realistic. It no longer feels like the Switch will fall over when matched up against a strong gust of wind.

Audio also gets a boost here, which is a small, but nice touch. When playing in handheld mode, the onboard speakers just sound a bit louder and crisper overall. Much like the way the new display removes the Switch’s washed-out haze, the same is true here to a more subtle extent. The upgrade in audio won’t make a difference if you play with headphones while on the go, but it’s nice for a lazy couch gamer like me.

The other changes here are less essential, though it’s hard to complain much. The Switch’s internal storage has been doubled from 32 GB to 64 GB. That number is still pretty paltry considering that the upcoming Steam Deck includes 512 GB of storage if you shell out for the top model. Switch games are smaller than PC games, and you can still save space if you buy Nintendo’s game physically, but those who live by downloads will still need a microSD card in any case.

The OLED’s other upgrades are more subtle by comparison, though they justify the $50 bump in price.

The aesthetic component is a nice plus, too, though hardly a reason to upgrade. The white Joy-Cons appear especially clean when attached to the screen, making it look like less of a toy. The white dock is similarly nice on the eyes, pairing particularly well with a PlayStation 5 on your entertainment center. The inside of the dock just looks cleaner, too, with a smooth black interior that doesn’t feel quite as screen-scratching as the normal dock. I wouldn’t advise that anyone pick up a console for the colors (there’s nothing different about the Joy-Cons, so don’t expect a drift fix here), but it’s a fine bonus if you do pick one up.

“Bonus” is kind of the key word here. Other than the screen and the kickstand, the OLED’s new features are nice, but inessential add-ons. The only other important boost here is in battery, though it depends on what Switch you already own. For those who bought a base model Switch in 2017 and didn’t upgrade to its new SKU in 2019, the OLED features the latter’s increased battery size. It wasn’t worth shelling out $300 for an otherwise identical product then, but it’s more enticing now in the context of an actually buffed system.

What’s most puzzling about the Switch OLED is that it doesn’t bring any real improvements for docked play. While handheld and tabletop mode get a nice boost here, it’ll run exactly the same on your TV. Considering that Nintendo previously released the handheld-focused Switch Lite, you’d think its next system would tackle the other side of the hybrid console’s player base. Bafflingly, that’s not the case here.

What we’re left with is a console upgrade that’s an easy recommendation to some players, but completely irrelevant to others.

There’s only one real difference when it comes to TV play: The newly redesigned dock includes an LAN port to support wired online play. Theoretically, that should make online experiences more stable, which is something the Nintendo Switch desperately needs. Naturally, it’s not quite so simple. Online multiplayer is a two-way (or four-way or 100-way) street. If I’m wired in, I’ll know that I won’t get Wi-Fi hiccups, but that doesn’t mean my opponents won’t have problems on their end. Most of my tests with Super Smash Bros. Ultimate were smooth, but every once in a while, I’d jump into a four-player game and stutters or lag would kick in. A wired internet port only really works if everyone has access to it, which requires players widely upgrading their docks. More practically, the wired connection is going to be a niche benefit for competitive players.

What we’re left with is a console upgrade that’s an easy recommendation to some players, but completely irrelevant to others. Buying the console for the first time? The OLED is a no-brainer. Are you a handheld player eager to move up a tier? It’s a good excuse to upgrade if you have the money to spare. But for those who only play on TV, there’s virtually no reason to buy one — especially since its dock will be available to purchase separately via Nintendo’s website.

With Nintendo denying reports that a 4K model is in the works, it’s impossible to know if we’ll ever get a real Switch Pro. For the time being, this could be the last upgrade we get during the Switch’s lifetime. It’s certainly not the change we were hoping for, but I’d be lying if I said the new display wasn’t impressive. This is the model Nintendo should have put out at launch.

The Nintendo Switch OLED model is an improvement over an already good console, full stop. No, it can’t do 4K and it doesn’t feel like a PS4 Pro-sized midlife change, but an upgrade is an upgrade. The new OLED panel is a huge improvement that makes the Switch’s old screen look washed out by comparison. A new kickstand and better onboard audio both justify the extra $50, though its other improvements are somewhat superfluous. It may not be the upgrade the system needed after four years on the market, but it’s the definitive model to buy if you don’t own a Switch already.

It’s certainly better than a regular Switch if you play handheld. If you want more power, the Steam Deck is right around the corner (if you can get one).

The redesigned dock reduces the likelihood of accruing hairline scratches on the screen. Is your Switch still working four years later? Then expect this one to keep chugging in a similar fashion.

Yes. If you don’t have a Switch already, there’s no reason not to start here. It’s a worthwhile upgrade for those who play in handheld mode, too, though TV players won’t get much of anything out of this.