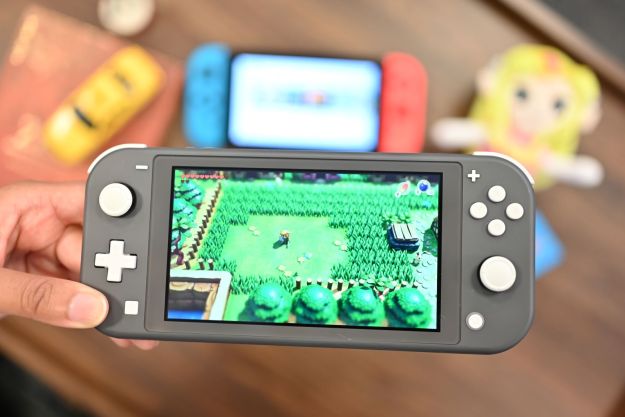 With the release of the Nintendo Switch — the company’s hybrid, grab-and-go console — Nintendo finally found a happy medium for both console and handheld gamers. The Switch’s ability to “switch” between TV and handheld mode at the snap of a finger was and still is its biggest draw. That said, a few sacrifices were made so it could appeal to a broader audience.

The Switch isn’t as compact as the company’s previous handhelds, such as the venerable Nintendo 3DS, it’s prone to cramping fingers during long game sessions, and it has a short battery life that isn’t ideal for on-the-go gaming. Removing the ability to “switch” from the equation, Nintendo gave us the Switch Lite, an unabashed return to handheld gaming that’s a solution to all those problems.

Ditching the Joy-Cons, the Switch Lite comes with an all-in-one design. It’s almost an inch shorter in width, making it more compact than the original. Coming in at 9.7 ounces, it’s lighter but not so much that it feels flimsy. Instead, you get a more portable console, made to be snatched up and slipped into the side pocket of a backpack or bag when you’re on the go.

Despite being smaller than its predecessor, the Switch Lite feels incredibly comfortable to hold. The layout is slightly different as the shoulder buttons are raised higher and the trigger buttons a bit longer than on the regular Switch. There’s also the introduction of a D-pad in lieu of the four separate directional buttons found on the Joy-Cons.

This makes for smoother and more precise input, as there is no divot to move over in the middle of each button press. It feels good to play Super Mario Maker 2 levels the way I remember playing classic Super Mario games as a kid. The Switch Lite’s ergonomic shape fits snugly into your hands, and with an improved button layout, the handheld gives the impression its been made with long sessions of handheld gaming in mind.

It launched in a small variety of colors — gray, yellow, or turquoise — with off-white buttons that are a nice contrast on the gray console, and complementary to the turquoise and yellow variants. There’s a Pokemon Sword and Shield version available now, and Nintendo likely has plans for even more colors and designs and announced a new coral version in 2020, a strategy the company has used with past handhelds. With its small size, color variety, and matte finish, the Switch Lite has an adorable aesthetic that kids and Nintendo fans will love.

As for performance and battery life, the Switch Lite comes with a smaller and more energy-efficient Tegra chip than the original Switch. Nintendo says this contributes to its longer battery life. Considering portability is one of the Switch Lite’s key features, this is definitely one of the more important upgrades to consider.

If you like to pass the time during a commute or need to keep the kids (or yourself) busy for a few hours, I’d say that the Switch Lite will do a stand-up job. It didn’t last me through a six-hour flight, but it did offer up a nice distraction for a good portion of it. I do wish the Switch Lite offered the same extended battery life as the revised Nintendo Switch, but its small size and more affordable price may be why it doesn’t.

There aren’t any obvious differences in gaming performance; Nintendo’s properties continue to run as smooth as butter on the Switch Lite. Drifting around Bowser’s Castle in Mario Kart 8 Deluxe is still as satisfying as I remember it to be. Just the same, Xenoblade Chronicles 2 still suffers from texture loading issues, and the occasional drop in framerate is ever-so-slightly noticeable in Link’s Awakening. Basically, games that didn’t perform so hot on the original Switch will continue to, well, not be so great on the Switch Lite.

Playing games on handheld and comparing the two, I found the 5.5-inch touchscreen and 720p resolution of the Switch Lite display sharper and more vibrant than the original Switch’s screen. This is likely a result of how the Switch’s native resolution looks on a smaller screen but the difference is noticeable.

Despite their differences, the Switch Lite has many of the same offerings as the original. The OS is the same, which means it comes with all the same features — and lack thereof. There is no native chat support (at least not without a little help from game developers) and, as brought up by Business Insider, still no Bluetooth audio support.

The Switch Lite’s lack of Bluetooth support for wireless headphones is a potential ding for some, but it’s more environmentally responsible. Wireless earbuds contribute to the problem of e-waste due to their short lifespans and lack of repairability. And if you truly desire Bluetooth audio, buy an adapter — one of several cool Switch Lite accessories you’ll end up investing in. There’s also the included auxiliary port for wired headphones, which will offer up better audio for gaming anyway.

It’s also worth mentioning that the Switch Lite doesn’t inherently support the full Switch library. This makes sense: The Switch Lite doesn’t come with a dock, HDMI output, or Joy-Cons, which means it can’t connect to the TV and doesn’t have motion controls. Out of the box, it only supports games playable in handheld mode, which you can see labeled on the back of a game’s case or on its page under supported play modes in the Nintendo eShop.

This doesn’t significantly impact your options, but if you’re keen on playing Just Dance or trying out Nintendo Labo, you’ll want the standard Switch. As someone who only plays the Switch in handheld mode, these options won’t be missed. You could purchase Joy-Cons and look into a stand if you’re interested in playing games that require tabletop mode support, but that’s an additional chunk of change out of your pocket that might be better spent on a regular Switch.

For handheld gamers, the Nintendo Switch Lite is a small triumph. Its compact body makes it more portable than the original Switch, and its ergonomic design feels great to hold during long sessions of gaming. These small improvements combined with the return of the D-pad and a stunning display add up to make the Switch Lite the best dedicated Nintendo handheld yet.

That said, it’s a handheld through and through. With no dock, HDMI support, or Joy-Cons, the Switch Lite doesn’t have TV support or motion controls, which slightly impacts your gaming options. Its battery life could be better, but it’s an improvement over the original.

No, the Nintendo Switch Lite is currently the best handheld you can get. The closest competitors would be the Nintendo 3DS or PlayStation Vita, but the 3DS is seeing fewer game releases and the PS Vita is no longer supported by Sony. Both are dated compared to the Switch Lite.

Nintendo systems have a 12-month warranty that covers defects but not physical damage. In terms of relevancy, the Switch Lite has the potential to last until the next generation of Nintendo consoles. While the Sony PS5 and Xbox Scarlett are due out next year, beloved first-party exclusives and an ever-growing game library make the Switch Lite a considerable option, especially for gamers looking for a dedicated handheld.

Yes. The Switch Lite is the best handheld console you can buy today, and possibly the best ever made.

Topics
Best Gaming PC Deals: Save on RTX 3070, 3080, 3090 PCs
The best capture cards for 2023: Xbox, PlayStation, and PC
The best PSVR games for 2023
The Elder Scrolls Online’s 2023 updates bring players back to Morrowind
How to connect an Xbox controller to a PC
GTA 5 cheat codes and secrets for PS4, PS5, Xbox, and PC
WWE 2K23: release date, editions, pre-order, and more
Despite divisive dialogue, Forspoken gets a lot right about open-world games
The best RPGs for the Nintendo Switch
How to link your Fire Emblem Engage and Fire Emblem Heroes account
Xbox and Bethesda’s Developer_Direct: how to watch and what to expect
Goldeneye 007 comes to Game Pass and Nintendo Switch later this week
The best iPhone games in 2023: 31 games you need to play right now