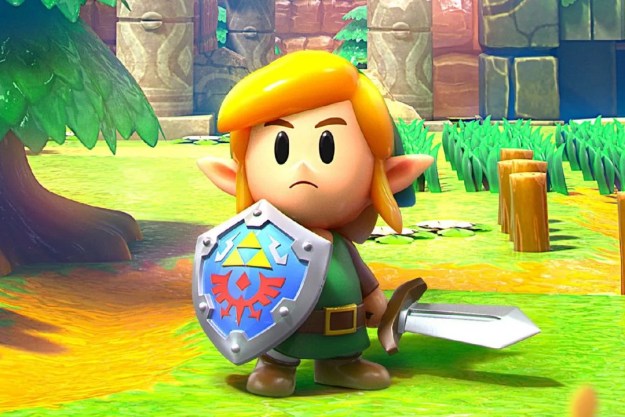 “Link's Awakening is the best top-down Zelda to date.”

Relentlessly endearing and unfailingly clever, The Legend of Zelda: Link’s Awakening is an ode to the Zelda of old, furnished with modernizations and subtle, but impactful, enhancements. Coming out of its two-decade-long slumber, Link’s Awakening reestablishes itself as one of the best games in the series. It’s the perfect game to play in handheld mode, showing off the dual strengths of the Switch hardware.

The new aesthetic brilliantly captures the heart of Koholint Island, bringing every last drop of dormant charm to the surface. Unfortunately, the new Chamber Dungeons mode, which lets you build and play dungeons using rooms from existing dungeons, feels tacked on. Chamber Dungeons only made me want a real “The Legend of Zelda Maker” that much more.

Nevertheless, Link’s Awakening uses an already fantastic foundation to make a fresh iteration that will undoubtedly appeal to both longtime fans and newcomers.

We’re not in Hyrule anymore

By now, Zelda fans are more than used to entries that take place outside of Hyrule, but Link’s Awakening was the first to do it.

For the uninitiated, The Legend of Zelda: Link’s Awakening takes place directly after the events of A Link to the Past. Traversing the high sea, Link runs into a storm that destroys his raft. He comes home to a bed inside a small home, gazing up at Marin and her father Tarin, soon learning he is on Koholint Island.

Link gathers his sword and shield, and is then informed by a wise owl that he must awaken the Wind Fish to get back home. Restrained inside of a giant eff at the apex of Koholint Island, the only way to stir him from his slumber is to collect the eight instruments of the Sirens from the dungeons situated throughout the island.

Koholint Island still has the usual trappings of the series: A central town called Mabe Village, an unsettling forest, lush prairie, swamp, desert, cemetery, caves, and calm streams segmenting the brown clay landmasses covered in bright green grass, both high and closely mown. Overall, it’s a smaller overworld than most Zelda games, but the quaintness works quite well thanks to the personality of the people and animals who inhabit it.

With Link’s Awakening, the fresh look gels incredibly well with the world and its characters.

Koholint Island is pretty darn weird. There’s Schule Donavitch, an alligator painter who is working on a portrait of a hippo simply named Hippo. Schule’s brother Sale sells bananas in a beach hut on Toronbo Shores. Madam MeowMeow raises Chain Chomps and loves to tell Link about her prized BowWow’s fur coat. Chef Bear longs for the day when he can open a restaurant in Mabe Village. This quirky group of characters brings Koholint Island to life, adding to both the cozy story and the air of mystery that the island holds.

The significantly redesigned graphical style complements Koholint Island’s defining features and residents. All of the characters look like toy dolls, while environments are extra bright and filled with far more detail than ever before. The overall aesthetic can be described in one word: Adorable.

Though top-down like old school and handheld Zelda games, the camera perspective is closer to the ground, providing an isometric view that really helps show off the detailed animations, both big and small. It’s all irresistibly cute, even when squaring off against the Nightmares (bosses) in each dungeon.

Regions in the overworld freely flow into one another, no longer limited by “screens” that segmented the island into a grid. Dungeons are the exception here, as many of the rooms retain the same dimensions as the original, which is understandable. The framerate occasionally gets a bit choppy in Mabe Village, which is abnormal for first-party Nintendo games. It’s not frequent enough to sour the delightful presentation, though.

I’ve always liked how Nintendo has toyed with different art styles with the Zelda series. With Link’s Awakening, the fresh look gels incredibly well with the world and its characters. The charm is heightened even more from the updated sound effects and orchestrated score that includes some of the most soothing and catchy tunes in franchise history.

Link’s Awakening first released in 1993, practically making it a video game dinosaur. Game design has advanced since then, so it wouldn’t be surprising if the dungeons felt limited or even stale. That’s not the case here. All eight main dungeons and the optional Color Dungeon (returning from Link’s Awakening DX) are remarkable feats in level design. They still hold some of the most clever and engaging puzzles in franchise history. Before you even enter the dungeons, the quests to secure the entrance keys are engaging mini-adventures themselves.

This is classic Zelda, with locked rooms, treasure chests that appear when defeating enemies and solving puzzles, and of course, an item to add to Link’s inventory. Smartly, the sword, shield, Pegasus Boots, Power Bracelet, and Flippers are always equipped (once unlocked). This frees you up to map two additional items to X and Y. There’s not nearly as much need to go into the menu and swap out bombs for the Hook Shot or Roc’s Feather for the Boomerang. The streamlined inventory management system really makes a huge difference.

What I really love about The Legend of Zelda: Link’s Awakening’s dungeons are how all of them feel quite different when it comes to layout, puzzles, and enemies. Whether you’re slashing multi-colored blocks in the right pattern to make them all match, bouncing chess pieces off the ground to get them into their slots, or filling the empty tiles in the room with a fully controllable movable block, the dungeons constantly delight. Dungeon compasses now point in the direction of treasure chests rather than just beeping. It’s a small addition that wasn’t really needed, but it doesn’t hurt the experience either.

Even though it’s tougher than the average Zelda game, it’s not Breath of the Wild hard.

It’s not just the puzzles; the enemies shine, too. From Spiked Beetles that must be bopped with a shield before dealing damage to Moblins and Sword Stalfos who need to be parried before landing a hit to Dodongo Snakes that need to ingest three bombs, the baddies that lurk in the eight dungeons offer a great variety that really compels you to use the items you gather along the way.

And yes, those are Goombas, Piranha Plants, and Cheep Cheeps in the sidescrolling sections. Most times you enter a dungeon staircase, it’s like you emerge in another world. There are even a few Boos and a strange version of Kirby. The Super Mario and Kirby cameos add to the charming weirdness of Koholint Island.

The mini-bosses and Nightmares are well-designed and generally offer a tougher challenge than the average Zelda boss. My favorite mini-boss is Smasher, who tosses a heavy ball at Link. The only way to damage him is to pick up the ball yourself and lob it back at him. He flees when you pick up his prized possession, making for a pretty funny showdown. And the Nightmare Slime Eel forces you to use a combination of Roc’s Feather to dodge spinning attacks while pulling the eel from the wall with the Hook Shot. It’s not always immediately clear how to approach a boss, which makes that “aha” moment all the more satisfying.

Even though it’s tougher than the average Zelda game, it’s not Breath of the Wild hard. If you want a stiffer challenge, you can jump into Hero mode from the start, which doubles enemy damage and removes heart drops. It’s a strenuous but rewarding way to play.

New to the party

Though an authentic remake, Link’s Awakening for Switch does add a score of great new features that make the journey to the Wind Fish’s egg even better.

The original only had 12 Heart Pieces, that number has climbed to 32 in the remake. Secret Seashells ballooned from 26 to 50, and an unlockable Seashell Sensor alerts you when you’re near a find. Fairy Bottles have been added, which is great from both a gameplay and collectible perspective.

New Mario collectibles beyond the Yoshi Doll from the crane game in Mabe Village have been added. These furnish the houses in Mabe Village. They aren’t game-changing additions, but still, it’s more stuff to find. And Zelda games partly revolve around the joy of finding stuff.

I really like that after acquiring the boomerang, you can buy back the item you traded it for rather than having to keep trading back and forth. More fast travel spots have been added, so you can warp all over the map and save time.

There’s a ton of backtracking for collectibles in The Legend of Zelda: Link’s Awakening. I love how collectibles feel just out of reach. It’s like the game is telling you: “There’s more here than meets the eye.” Nintendo added a Breath of the Wild-style pin system to let you mark up to 30 spots on the map at once with various icons such as hearts, treasure chests, and shapes. It’s a wonderful new addition that adds convenience to backtracking.

The Legend of Zelda Maker, please

In this iteration of Link’s Awakening, Dampé the graveyard keeper from Ocarina of Time has set up shop where the Camera Shop was in Link’s Awakening DX. With the camera photo collectibles gone, Dampé has a more active task for you: Building and playing your own dungeons. The vast majority of the rooms you can place hail from the main dungeons. You simply connect these “Chamber Stones” together, adding rooms with locked doors, treasure chests, stairs, and bosses. You can find new pieces and earn them by completing your creations.

While Chamber Dungeons has a nice guided set of challenges where you build and play, gradually creating more advanced layouts, it gets dry rather quickly. I mostly kept playing to get collectibles, as you can earn Heart Pieces and Secret Seashells in Chamber Dungeons.

The problem here is that you’re not building levels from scratch. You’re merely connecting rooms from dungeons that more than likely don’t have the same theme. It’s weird, sometimes jarring, and just made me want to replay the main adventure again to take on the actual dungeons a second time. You can eventually add effects to rooms, like bombs dropping from the ceiling, as tweaked versions of the original rooms, but these are minor flourishes that only temporarily break up the routine feeling of Chamber Dungeons.

Zelda Amiibo can store dungeons and unlock Chamber Stones. That said, you probably won’t be awed by your buddy’s Chamber Dungeon.

Chamber Dungeons doesn’t take anything away from Link’s Awakening on Switch, but it doesn’t add much either. Now a real The Legend of Zelda Maker? That’s something I could get behind.

The Legend of Zelda: Link’s Awakening for Nintendo Switch is a near-perfect remake. Its wonderful redone art style suits the quirky Koholint Island. The dungeons are as clever as I remembered, and Nintendo added a bunch of additional collectibles and quality of life improvements to make exploring the world even dandier. The new Chamber Dungeons mode is bland and forgettable, but it’s totally optional and doesn’t deter from this grand old school Zelda adventure.

No, Link’s Awakening is in a league of its own when it comes to top-down Zelda games, and adventure games in general, on the Switch.

It took me about 30 hours to finish the story and find most of the collectibles. I spent around five hours with Chamber Dungeons.

Yes, Link’s Awakening is one of the best adventure games on Switch.