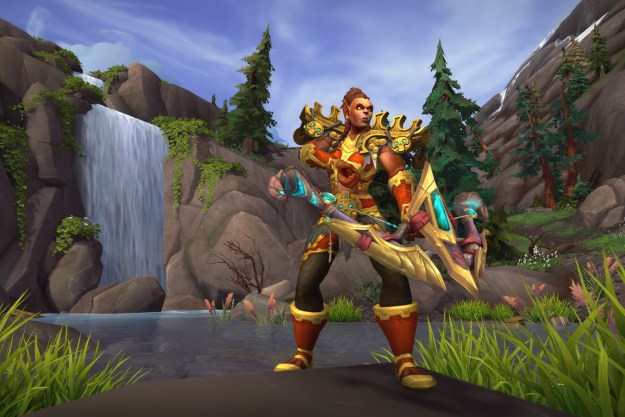 “'World of Warcraft' is the world's best MMORPG, but 'Battle for Azeroth' could do more to make it better.”

Where did Jaina go?

That was my question as I dug into World of Warcraft’s new expansion, Battle for Azeroth. As an Alliance player, the expansion’s first hour treated me to the tragic story of Jaina Proudmoore, one of Warcraft’s most well-known characters. Having betrayed her father in the name of peace during the events of Warcraft III, the new expansion sees Jaina head home to Kul’Tiras in a desperate attempt to reunify her people with the Alliance – and face her past.

It’s the start to what could be an engrossing tale, but one that instead unravels into a mess of tangled threads that reflect the larger issues faced by Battle for Azeroth. Many of the game’s individual components are great, but they don’t weave neatly together, and at times the game seems to forget important plot beats and features just hours after they’re introduced.

Putting the War back in Warcraft. More. Again?

Battle for Azeroth supposedly focuses on the fight between the Alliance and the Horde. Blizzard often revisits this core conflict when it needs to inject a shot of tension, but the war’s impact on the game is less than the pre-release marketing blitz would have you think.

The cinematics frame your visit to Kul’Tiras (or Zandalar, if you’re playing Horde) as part of an urgent bid to gain support against the opposing faction. They psych you up in anticipation for what’s to come. Yet that expectation will deflate as you realize “what’s to come” is a trio of tepid main-quests surrounded by a swarm of forgettable side-quests.

Unlike past expansions, Battle for Azeroth includes two separate island continents — the Alliance levels in Kul’Tiras and the Horde levels in Zandalar. While there is a series of War Campaign quests that take you to the other faction’s continent, they’re short and mundane quest chains that encapsulate the overall issues with the expansion’s plot. Everyone insists the stakes are high, yet they never feel high, because nothing you care about is at risk. You’ll only be threatened by the enemy if you turn on “War Mode,” which turns on open-world combat.

Yet you probably won’t turn it on. You can’t easily group with friends who have War Mode off, and most people who turn it on are rolling in groups. Characters leveling alone are bugs to be squished by large, organized groups that roll about the landscape. Even slugfests between groups are little more than distractions. There’s nothing of consequence to fight over, and issues with class and gear balance mean too many fights feel one-sided.

Everyone insists the stakes are high, yet they never feel high, because nothing you care about is at risk.

The vacuum left by the opposing side is hardly filled by the minor villains in each zone. They’re predictable, juvenile, and never feel like a serious threat – surprising, given how much we have to lose according to the game’s recent events. The Burning of Teldrassil, part of the expansion’s pre-release story, put players on a doomed quest to save civilians from being burned alive. Now, weeks later, players take to the skies on a noble quest to bombard pirates with parrot shit.

Step back from the tales told in quests, though, and it’s impossible to deny the new zones are gorgeous and thematic. The game’s harshest critics have long derided it as a “theme park” game, but those themes are diverse and brilliantly realized. Drustvar’s main story, which focuses on suppressing the area’s native people and hunting down witches, is so unoriginal it feels like a test trial of Blizzard’s new narrative-writing bot, but the area is wonderfully spooky and filled with fantastically fearsome wicker constructs. Stormsong Valley, meanwhile, adds a touch of Lovecraft to the Alliance side’s sea shanty, and it had my favorite main-quest content.

The Horde zones are arguably even more attractive, and certainly more distinctive. The Zandalari Empire riffs off Mayan and Incan architecture, which isn’t commonly found in modern video games. I often found myself stopping to stare at Zandalar’s awesome vistas. You wouldn’t think a 14-year-old game could impress modern eyes, but Blizzard’s artists have managed it.

Though the disappointing story is a drag, that doesn’t mean Battle for Azeroth is hopeless. On the contrary, it’s a blast to play, and it’s all a matter of class.

“Class,” of course, is the familiar fantasy game trope surrounding the different abilities of characters, and there’s not much unique about Blizzard’s approach at a glance. While the Demon Hunter, added in the previous Legion expansion, is a bit off the usual path, most classes are exactly what you’d expect. Warriors, Mages, and Druids, oh my!

Yet there’s more to a class than its theme. How it plays is just as important, and that’s where you’ll find Battle for Azeroth’s success. Over a decade of iteration has helped Blizzard polish each class to a near-perfect sheen. Most have enough abilities to keep you interested, but not so many that you feel overwhelmed, and every character has at least one weird trick. Druids shape-shift. Warriors leap through the air like superheroes. Warlocks summon demons.

The game currently has twelve classes, which is a fair number, but that sells its variety short. Each class has two to four sub-classes, and they’re so diverse that they’re basically a separate class. That brings the options to an incredible thirty-six paths. Blizzard uses this broad selection not just to run up the number, but also to make sure you can find a playstyle you love.

Battle for Azeroth does take one step back from Legion. The new customizable gear, Azerite Armor, offers fewer options than the Artifact Weapons in Legion. The individual upgrades on Azerite Armor usually have more impact, but they’re still too small to make an easily noticeable difference. One of my Druid’s armor pieces offered an upgrade that rewarded me with extra damage for using different types of spells, for example. Yet the added damage didn’t seem noticeable, and I saw no new spell effect. I had trouble remembering the upgrade existed at all.

Still, the game’s many specializations offer character variety that World of Warcraft lacked in earlier years. Your character feels like your character more than ever, and that attachment keeps you itching to finish just one more quest before you log off.

Forget Island Expeditions. Dungeons are where it’s at.

Battle for Azeroth adds two new game modes, Island Expeditions and Warfronts, though only the former is available to play at launch. The expeditions are three-player missions that dump players on a randomly generated island with the goal of collecting as much Azerite as possible. You’re not alone, however; the other faction is also trying to collect Azerite.

It’s a good idea, but players already seem bored with it. Variety, or lack of, is part of the problem. The three-on-three format is balanced and makes for tight races to the finish. It also means you’re always there for the same reason. The island might look different, and the enemies might look a bit different, but you’re always there for the same reason.

You’re not going to pick Expeditions for excitement, and you won’t show up for the rewards, either.

You’re not going to pick Expeditions for excitement, and you won’t show up for the rewards, either. You earn a lot of Azerite, but that’s it aside from a few random rewards, like mounts. Azerite is a boring reward, and players who aren’t trying hard to progress quickly into Mythic-difficulty content don’t need it to be effective. The result? Most players ignore Expeditions.

Dungeons remain the real end-game content for most players (aside from the raid, of course), as has been true since the original game’s release. The expansion’s 10 new dungeons make Blizzard’s experience obvious. They’re slick experiences that offer the variety Expeditions lack. A few dungeons are traditional, linear experiences. Others are more open. And some land in-between. My personal favorite is probably Waycrest Manor, a non-linear dungeon that includes a wonderful fight against the mansion’s bewitched owners, complete with organ music.

The fun is backed up with rewards. Dungeons aren’t too stingy with gear, so you usually come out with some kind of upgrade. The quick pace of upgrades means you’ll graduate quickly from normal mode to heroic, and from heroic to mythic, before you become bored with playing at a level that’s no longer a challenge. From there you can jump into Mythic+ dungeons which, due to scaling difficulty with random affixes, can task even hardcore players.

This isn’t the game you think it is

Yet you don’t need to be hardcore to enjoy Battle for Azeroth. Blizzard successfully transformed World of Warcraft into a game that rewards players at all levels of skill and commitment. You can work towards a goal even if you have less than half an hour to play, and you never have to “git gud” if you’d rather not bother.

The climatic introduction cinematic and quests lead into a whole lot of cliché and not a lot of action.

Allied races are a clever example. You can’t play one until you earn exalted reputation with the race’s in-game faction, which takes a few weeks of casual play. Once unlocked, you can earn a unique and very cool “heritage armor” set – but only if you level up that character to maximum without using a paid level boost. For the first time ever, there’s reason to unlock and level up new characters. If you just want to start alternative characters and never touch a raid or even an end-game dungeon, that’s cool! The game supports and rewards you all the same.

Or perhaps you do want an end-game challenge, but you don’t have a few hours to set aside for a raid. No problem. Mythic+ dungeons, timed challenge runs you must finish in a half hour or less, have returned. There’s also the new Warfronts mode which, in beta, usually took 30 or 40 minutes – though it won’t be available until a few weeks into the launch of Battle for Azeroth. Player-versus-player battlegrounds also return and rarely require more than 20 minutes to finish.

Raids still exist, of course, and they’re ridiculously hard if you want them to be. Mythic raid bosses won’t be slain for the first time until after several weeks, and hundreds of attempts, by the world’s best guilds. That, however, is a fraction of what you can do after you hit Battle for Azeroth’s level cap. There’s always some way to move forward, no matter how much (or little) time you can commit to the game.

World of Warcraft is good. Battle for Azeroth seems … OK

Battle for Azeroth is off to a weak start. The new zones are beautiful, to be sure, but the climactic introduction cinematic and quests lead into a whole lot of cliché and not a lot of action. Island Expeditions have flopped and the new gear system, Azerite Armor, is simultaneously confusing and dull.

Yet the core of World of Warcraft is better than ever before. Anyone who hasn’t played the Legion expansion should give the game a try – you don’t even have to buy the new expansion, as all expansions prior to Battle for Azeroth are now unlocked with a monthly subscription. You can become reacquainted for just $15.