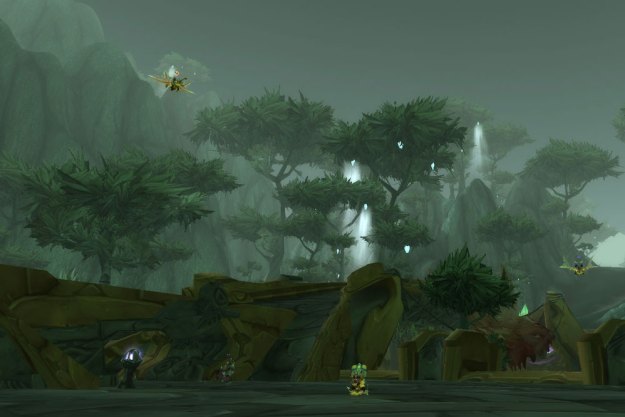 “Aside from a serious lack of player flexibility, Burning Crusade Classic is a rewarding MMORPG that asks for a lot but remembers to tip generously.”

The opportunity to revisit one of the best MMORPGs like World of Warcraft after experiencing the growth, decline, and reimagining of its whole genre isn’t one that comes around often. So what did I find when playing World of Warcraft: The Burning Crusade Classic, an update of a game that as a lost, lonely teenager once consumed my life? The same thing I grew to miss when I moved on: Community. And then I lost it. Again.

The 2004 pop culture success of World of Warcraft introduced players to hefty level grinds, sprawling PvP, and complicated, coordinated raids on boss lairs. It was a coming-of-age for the MMORPG genre, bringing it firmly into the mainstream. The Burning Crusade expansion years later asked players to do it all again in a sprawling new zone with more bosses, bigger backstories, and even bigger weapons. It sounds simple; almost unnecessary, in fact. But it was exactly what players wanted more of. And it worked.

Burning Crusade‘s storytelling methods are basically nonexistent in the face of today’s modern MMOs, but the core experience is still a hoot. At least, it was in the first week or two.

Burning Crusade Classic begins the same way it did back then. As it should. Players sprint to the Blasted Lands south of the Eastern Kingdoms and charge ferociously through the Dark Portal. The iconic gateway was the starting point of the Warcraft story back in the 1990s, and trudging back through it with an army of friends and future allies will never get old. It’s just a shame that sticking with them after that beautiful moment is so damn hard.

With no server downtime leading up to the big transition from vanilla WoW to Burning Crusade Classic, Blizzard really nailed the execution necessary to have this gigantic MMO expand like the great adventure that it is. Blizzard has had its fair share of disastrous online releases over the decades, but this wasn’t one of them.

Without a hitch, we were able to again experience the iconic moment when waves of players charged forward together, their passion for continuing the quest they started years ago fueling their push into the unknown. Hundreds went in, and server sharding — a method of temporarily splitting players off into smaller servers — kept the first zone we were set to spend a dozen hours in from becoming overcrowded.

Blizzard has had its fair share of disastrous online releases over the decades, but this wasn’t one of them.

Although I didn’t originally start playing World of Warcraft until the Wrath of the Lich King expansion was right around the corner, some of my fondest memories come from the 60 to 70 experience presented here — the struggle of exploring Hellfire Peninsula a little too early at 58, a disdain for the Zangermarsh zone, and growing adoration for the sweeping green plains of Nagrand.

All those memories came flooding back in my two weeks rediscovering the place I called home as a teenager. The good, the bad, and the kind that hit differently after spending years with countless other supposed “WoW killers.”

As fantastical as the hype and build-up to run through the Dark Portal was, the fatal flaw has begun to show yet again. The enemy? Nostalgia.

After the initial rush of players powered their way through WoW Classic, the few who were late to the party struggled to reach the top. They were brought in by the hype but spat out by Blizzard’s hardcore group-based game design. And it’s happening again.

As work and other commitments have me barely halfway through the leveling experience, it’s already become much harder to find people around my level to run the expansion’s 16 hyperspecific dungeons. Without them to pad out my experience points, I’m left fighting alone, running hundreds of repetitive quests in slightly different locations until I hit level 70.

If I get there, I’ll have no social connections to get me into the group content that players level for in the first place. It’s a curse. Those lagging behind will be forced to fall further. And who knows how many will be left to run level 70 content when casuals like me catch up.

Create the problem, forget the solution

It’s not that leveling without a few dungeon runs is impossible, but it does get old. And lonely. As time goes on and the player base thins out, we’re going to start thinking about what could have been done to address it.

What World of Warcraft has always done well is hook players with staple RPG mechanics. Leveling may take time, but that “ding” and every kill or quest toward it always feels rewarding. It can be laborious and needlessly time-consuming, but whether it’s a new skill here or a rare random item drop there, you’re constantly fed cake on the way to the frosting.

As much as the classic experience is why we’re here, the Dual-Spec feature from the subsequent Wrath of the Lich King is one quality of life feature that absolutely should have been brought forward. It could have made a massive difference to the experience without poisoning the well.

Most classes can fill two or all three of the common roles in a group, but the “talent” system locks them into only being viable in one and makes it increasingly more expensive to swap out. The Dual-Spec feature basically gave players a secondary loadout to change into when needed, offering the chance not only to fill another role when required by a group, but to change up their playstyle to avoid getting bored by pressing the same buttons day after day.

There were no downsides to the system. It was just respectful of a player’s time. And when you’re playing a class that’s designed to be four different ones at once, it’s infuriating to be unable to be whoever my next team needs me to be.

World of Warcraft: The Burning Crusade Classic may lack the hard-hitting story beats of most other games in its class, but the depth of its RPG elements represents old-fashioned values that are still sorely missed in other MMOs. It’s just a shame that some key tweaks weren’t brought forward to fix the issues the inevitably smaller player base is likely to run into far sooner than they did in the original release.

Whether you’re fighting, crafting, or gathering, your actions always serve a purpose in the Burning Crusade Classic campaign. Anyone can feel like they’re contributing either to their own guilds and groups or to the server as a whole. Leveling can feel sluggish at times, but talent points, meaningful gear upgrades, and a clear endgame goal create an RPG experience that still manages to make it a game worth experiencing if you have the time, even if it’s more demanding than we typically tolerate from games like this.

Retail players can still experience Burning Crusade’s Outland almost piece-for-piece without this release, but for veterans of the franchise, revisiting the title will feel like coming home after a decade away. As it should. It’s just a shame it won’t last nearly as long this time.

If you prefer more flexibility in how you spend your time, Final Fantasy XIV is still a better option. The community is lovely and creative, and you’re free to fill any role you want, leveling in a bunch of different ways to get there.

It’s about 18 months until Wrath of the Lich King Classic inevitably comes to bring World of Warcraft Classic back to its high point. More raids, new equipment, and bigger stories will come out in the months ahead until that happens.

Given it technically only costs the price of a World of Warcraft subscription, absolutely. It’s incredibly rare to have the opportunity to go back in time with an ever-changing MMORPG. Experience history. You probably won’t get a third chance.

Everything we know about Skull and Bones

Sega will delist classic Sonic games ahead of Origins