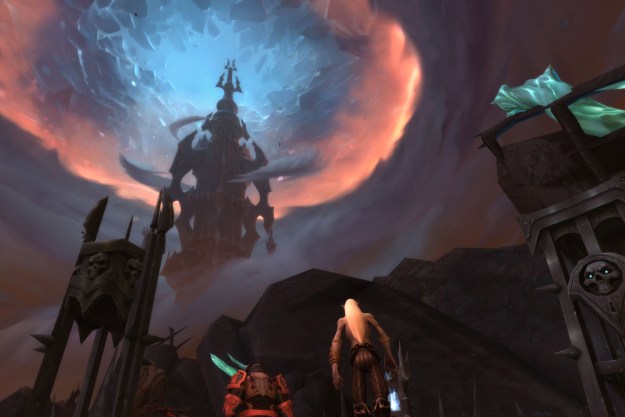 “World of Warcraft: Shadowlands gets lost in its attempt to offer players more choice than ever before, ultimately forgetting to restock the reward machine needed to keep patrons invested.”

In 2008, World of Warcraft was at its peak. Over 11 million people were ready to take on the returning threat of the Lich King — the corrupt paladin Arthas Menethil, who became the standout character of the franchise’s RTS (real-time strategy) days. But once the dust had settled, subscriber numbers plummeted to a point where Blizzard wouldn’t say how many were left. After the boom of Classic and record pre-order numbers of an expansion promising to explore the story of the Lich King further, nostalgia clearly has dominion over Blizzard’s biggest title. Now that we’re able to explore the veil between life and death in Shadowlands, just how long will we stick around?

For many, World of Warcraft: Shadowlands actually kicked off a month before its release, when the long-standing level grind was reworked into a far less demanding sprint. The changes offered a refreshingly fast way for returning veterans to get caught up in time for the expansion, with the 6- to 10-hour Shadowlands leveling experience ultimately highlighting a key change in direction that Blizzard may have just taken a little too far. It’s not that there’s too much or too little to get caught up in — it’s just difficult to find a reason to do anything at all.

For years now, players have tackled World of Warcraft in a number of ways. PvE, PvP, Pokemon-esque mount and creature collecting, achievement hunting, and grinding faction reputation for cosmetic rewards have all been par for the course. Virtually none of that has changed in Shadowlands. Not that it really needed to. But aside from the introduction of Torghast, a rougelite dungeon experience introduced after the initial level grind, there’s surprisingly little else to separate the last week of World of Warcraft and the last eight or so years.

There’s a heaven and hell for everyone

At the forefront of any new MMO expansion is a plethora of new zones to level up in. After playing the protagonist card to break out of Warcraft’s version of eternal damnation, the main city of Oribos becomes a glorified level select hub straight out of a PS1-era platformer, opening up story lines of the Covenants across Bastion, Maldraxxus, Ardenweald, and Revendreth in sequence. The style and tone of each zone differ drastically to fit the tastes of just about anyone, but stray too far from the confines of one zone’s questline, and it’s easy to lose the motivation to see the actually mandatory story line through to its current conclusion.

The existence of sidequests in the first playthrough suggests an element of freedom is baked into the leveling experience, just as it is on the road to Level 50; it’s like it’s designed to allow for players to focus on a zone they enjoy.  But the truth of the matter is, it’s as linear as can be. The Shadowlands campaign shuts any meaningful end-game content behind the intertwined lore of its zones. Despite how it first looks, there’s no fluidity to the leveling experience here, which is odd given just how much blind freedom is dumped on the player once they hit the cap.

The true lack of direction kicks off toward the tail end of the Campaign questline. Once players have seen each zone’s story through, they’re made to choose which of the Covenants they want to stick with. Aside from the unique new skill or two each tosses onto the hotbar, there’s virtually no vital context outlining why players have to choose just one, or what real difference it’ll make to day-to-day life for the next year or two that Shadowlands is around for.

After making an uninformed choice, players follow their chosen Covenant’s story until they’re introduced to a litany of new content. There’s the roguelite tower of Torhgast, World Quests, various currencies, the returning (but mechanically tweaked) idle missions of the Command Table, and about five different reputation shops. It’s a bit much to take in all at once.

Each feature is tossed at players at a rapid pace. It’s not that there’s a shortage of content, but why you’d want to indulge in any is never really made clear. Without the rewards being clearly laid out on the table, it’s difficult to get the motivation to run one piece of content over another — or any at all, for that matter. Rather than sift through menus and vendors looking for motivation, I was often more compelled to shut the game off altogether and fire up one that makes its rewards plain to see.

Torghast, which houses dozens of floors to explore with randomly spawning modifiers and buffs, was a major focus of the expansion’s prerelease marketing. I still see ads for it even now. But after running through a small fraction of them, I’m still unsure as to why exactly I’m doing it. Like a lot of this newer content catalog, the reasons for its existence are painfully unclear.

An unnecessary fork in the road

After finally clearing my log of Campaign quests on my first character, I was completely lost as to what to do next. I’m used to MMOs going all-in on the PvE aspect. The idea that the real fun begins at max level is still a staple of the genre for most. There’s always been plenty to do in World of Warcarft outside of chasing gear for dungeons and raids, but given the need to fight your way to max level to experience it, you’d think the route to continue that adventure would be made obvious. In Shadowlands, virtually everything seems classed as optional content, and it’s never really clear what you’d want to focus on, why, or even how.

Without focus, the entire journey feels like an afterthought.

In fact, had it not been for the upgraded items I got for running the Campaign quests later than most, I wouldn’t have had the equipment needed to dive into the plethora of dungeons unceremoniously unlocked after hitting the cap. At no point did the game acknowledge they even existed, let alone give me a compelling reason to queue for them. It’s gear. Players want to run them for gear. The story, apparently, is inconsequential.

Almost every piece of content available right now feels like it has sat on some assumed “optional content” list that betrays a lack of direction Shadowlands has attempted to disguise as freedom. If Blizzard really wanted to make the game feel more open-ended, hiding the distraction of sidequests on a first run-through and refocusing the campaign on properly introducing the expansion’s late-game activities could have been a key consideration. They’re gated behind the storyline already, after all. Without focus, the entire journey feels like an afterthought.

As it stands, Shadowlands feels a little lost in translation. Blizzard spent the better part of the last year saying how it wanted its juggernaut MMO to feel more like an RPG again — where choices matter and rewards and plentiful. Yet, oddly enough, Shadowlands feels more bereft of that than ever before, becoming something of a jumbled experience that sits awkwardly between being an open-world “sandbox” MMO and a more linear “theme park” one.

It’s not that there’s too much to do, but there’s a disturbing lack of reason to truly get immersed in it. Players who don’t manage to figure out what they want to do or how to go about doing it risk getting left behind very quickly. Without the motivation to drive fans forward, getting back on whatever track they manage to find won’t be easy after the fact. Torghast feels like the only sliver of innovation this time around, but those who don’t care for it will be left with an incomplete-feeling experience.

For fans who already invested in World of Warcraft, it’s difficult to break out. But for those who aren’t, I vehemently believe Final Fantasy XIV is the better overall MMO experience.

About two years. That’s the average life span of a World of Warcraft expansion. Fans have to pay a fairly costly monthly fee that won’t always equal brand-new content.

No. Even for lapsed World of Warcraft player looking for a reason to get pulled back in, I can’t fully recommend this as a reason to try. There isn’t enough meat on the bone to make fans reconsider why they left in the first place.

Topics
Blizzard and NetEase reportedly cancel a Warcraft mobile MMO
Persona 5 Royal owners on PS4 can’t upgrade to PS5 version
If you own Final Fantasy 7 Remake, you can’t upgrade to Intergrade with PS Plus
Everything we know about The Outer Worlds 2
All missable characters in Fire Emblem Engage and how to get them
How to use PS5 voice commands
How to enter the Forbidden Meadow in Forspoken
Assassin’s Creed Mirage pre-order: Get a $10 Best Buy gift card
I played the original Dead Space before the remake — and I regret it
How to overclock Intel’s Arc GPUs for better performance
Samsung’s crazy rotating 4K gaming monitor is $700 off today
Forspoken cloaks: all cloak locations and abilities
Forspoken necklaces: all necklace locations and abilities