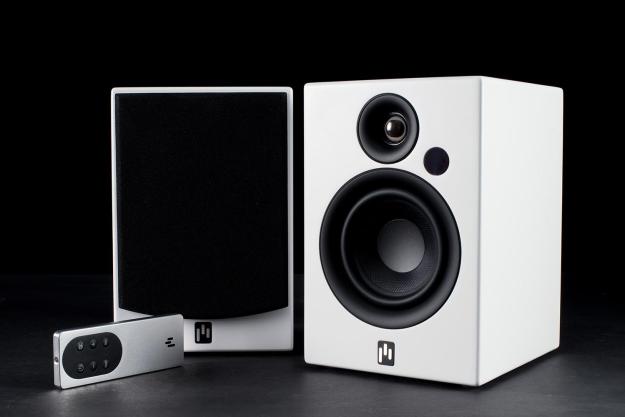 “Aperion’s Allaire Bluetooth speakers offer the best of what used to be two disparate worlds: Hi-Fi and wireless audio.”

Portable Bluetooth speakers, sound bars and sound platforms seem to be all the rage these days. Perhaps that explains why the powered speaker is enjoying a recent surge in popularity. While in the past most folks would lump powered speakers and “computer speakers” into the same category, recent developments have carved out an entirely new speaker category – one where premium build quality, ample amplification and enhanced connectivity are hallmarks. And although today’s best powered speakers can certainly act as a computer’s source of sound, the increased connectivity and refined sound quality they offer means you’re just as likely to find them in a study, bedroom or even the kitchen. For those who want the convenience of wireless sound without sacrificing everything that makes a traditional two-channel speaker system awesome, some pretty killer options now exist.

…we count [the Allaire] among the classiest-looking speakers of their kind.

Case in point: Aperion Audio’s new Allaire Bluetooth speakers. A decidedly premium offering to the genre, the Allaire bring style, convenience, and a mound of connection options, making them one of the most versatile speaker systems of their kind we’ve encountered. Of course, for all their spoils, you’ll also pay a fee of around $400, which places the Allaire in the same class as such premium Bluetooth speakers as the Soundfreaq Sound Stack and the Wren V5. We also wondered if that price entitled the buyer to a full helping of first-class Aperion sound, or perhaps some watered-down version of it.

The Allaire’s first impression is delivered by a remarkably complete collection of cables and accessories spread out elegantly along the box’s top level. Cables include a 3.5mm cable, an RCA to 3.5mm cable, a digital optical cable, heavy gauge speaker wire pre-terminated with banana plugs, and a power cord.

Also up top was a sleek little remote in the form of a heavy silver bar of aluminum with a succinct black oval of control keys. Almost magically concealed are any apparent seams for a battery panel. Seriously, the exterior of this thing is like the spaceship from “Flight of the Navigator.” We still don’t know how to open it.

We found the two speakers sunken in foam below the top panel, covered in white shrouds with magnetic grills resting in their own foam cutouts. The speakers are small, but felt relatively heavy as we removed them. The speakers’ creamy white exterior is soft to the touch, with a flat, semi-gloss finish. At the back of the left speaker we found the system’s collection of ins and outs. Here we spot a 3.5mm analog Aux input, an optical port, a USB charging port, and a rare find for the Allaire’s breed, a subwoofer output.

The Allaire exude a premium aesthetic, and we count them among the classiest-looking speakers of their kind. Everything from their rounded edges to their satiny finish and thoughtful magnetic grills give them the feel of a premium product. We enjoyed the white version we received for review, but the speakers come in all black if that’s more your bag. Resting about 8.5 x 6 x 7.5 (H x W x D-in inches) the Allaire come in a bit smaller than most bookshelf speakers, but just a tad larger than what one might consider a “satellite” speaker.

The Allaire’s specs are pleasantly easy to find, outlined at the back page of the start-up manual that comes with them, or clearly detailed on Aperion’s website. Driver compliment includes a ¾-inch soft dome tweeter and a 4.5-inch woofer housed in a bass reflex MDF enclosure. Aperion claims an impressively wide 60Hz-25kHz frequency range for the set. Power is handled by a class-D, 50 watt per channel amplifier, and wireless streaming is accomplished by Bluetooth 4.0, with aptX protocol supported for CD-quality sound from compatible devices.

Source selection for the system’s’ analog, optical, and Bluetooth connections is handled by the included remote control, with the active source indicated by a small LED found on the left speaker that glows green, red, and blue. The remote also controls volume, mute, power, and Bluetooth pairing, though our set was ready to pair as soon as we powered them on.

We used the Allaire Bluetooth speakers both for streaming music from our iPhone 5 and for watching movies. For the latter, the Allaire were connected to our TV using an optical digital connection, though an analog connection is always possible for those who need it. All told, it took us about two minutes to get the speakers up and running.

We knew going into our evaluation that music performance would reveal most of what we needed to know about the Allaire and, sure enough, it took us all of thirty seconds to come to the conclusion that these speakers were going to be a fun listen. Starting with some Dave Matthews as a warm-up, the Allaire exhibited a clear and detailed upper register, with rigid, full bass lines, and a supple-yet-accurate midrange.

Hi-hats cut through with the precision of a Katana blade, and acoustic instruments were carved with rich timbres

We were immediately impressed with the resonance of percussion instruments on songs like “Jimi Thing” and “The Warehouse”, especially tom drums, which kicked a thick, deep thud that was remarkably full for the speakers’ size. Hi-hats cut with through with the precision of a Katana blade, and acoustic instruments were carved with rich timbres. While bass tended to pop just a little forward on a few tracks, things were kept in a tight balance on the whole.

As we moved on to other genres and allowed our ears to settle in a bit, the speakers began to reveal a very wide and well-defined stereo image. The system showcased the old school, wide panning in “Salt of the Earth” by the Rolling Stones excellently. The acoustic guitar placed in the center was well-carved, with a chip-y attack and a smooth sustain. The lead vocal was pushed way out to the right during the first verse until making its way languidly back to center.

Radiohead’s “No Surprises” was displayed in an immersive set of layers, both side to side, and front and back, calling out slinking reverb tracks and a collage of other synth companions with deft clarity. We were also treated to the Allaire’s striking lyricism in the top end on this tune, detailed by the chorus of bells and synth tones that rang throughout. The tones were clear and precise up front, with a refined, smooth finish.

Though we’d heard more than enough music to offer the Allaire our enthusiastic seal of approval, we decided to call the speakers in for a late-night viewing of World War Z. Again, we were rewarded with a brilliant performance. Dialog was smooth, yet nuanced, and explosions had just enough power to excite, though we did tune into the 60 Hz cut-off in the bass pretty quickly. Of course, that’s why there’s a subwoofer output.

Gun shots in the movie were especially engaging. Each one rang with power and distinction, adding to the realism of the fight. We especially enjoyed the rat-a-tat of the 50-caliber gun as it assaulted the zombie tide over Jerusalem.

But our favorite effect came from the choppers. The rotors were clean at the cut, and the thick, full sound of the hits just seemed to pop in that ruddy midrange. And we’d be remiss if we didn’t mention the accuracy of the treble again here, which was never sharp, but always clear, able to reproduce sounds like the misting water from ocean currents, and sheets of pouring rain effortlessly.

The only real issue we ran into with the Allaire was that its Bluetooth volume level seemed to cap out pretty early. On our quietest tracks, we had to crank the volume to its maximum, and when we did, we found ourselves wanting for a little headroom. For us, this was a nominal problem, but those looking for rambunctious velocity may take issue. Other than that, there’s not much more we’d ask from a small shelf speaker.

Aperion’s Allaire Bluetooth speakers offer the best of what used to be two disparate worlds: Hi-FI and wireless audio. Apart from being an excellent pint-sized musical companion, their host of connection options make them a great alternative to a sound bar or platform for supplementing the audio of your flat screen. But most importantly, the speakers handled everything we threw at them with balance and brilliance, making them a steal even at their $400 price point.