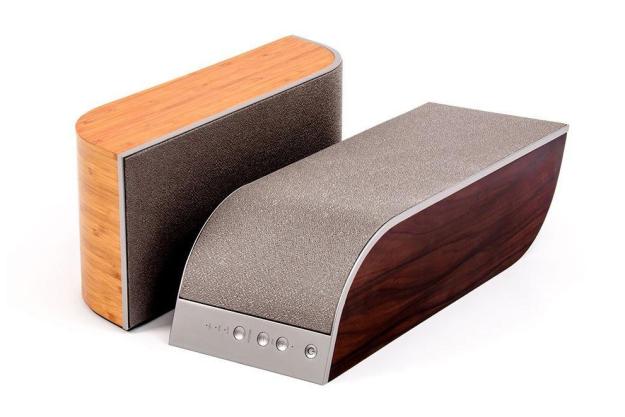 “For those whose musical preferences involve selections with little bass, the Wren V5AP is an excellent choice.”

It’s the future. If you haven’t noticed yet, just check out this pizza delivering drone helicopter. We rest our case. And since we’re in the future now, all of us should have elegant devices that fit anywhere and seamlessly play crystal clear music from our smartphones. At least that’s how companies like Wren Audio see things. Wren’s new V5 is a beautifully succinct wireless sound station in the same vein as high-end speakers from companies like Bowers and Wilkins and Bang & Olufsen.

However, unlike Bowers and Wilkins (which has consistently produced some of our favorite pieces in the segment), Wren is an infant in the audio world. And its $400 iOS and Android versions of the V5 are ambitious first steps in a cutthroat (i.e. shank-them-and-leave-them-for-dead) industry. We recently went ears-on with the iOS version, the Airplay-ready V5AP, to see if it holds up under intense scrutiny. Here’s how it played out.

Opening the top two layers of the V5AP’s box revealed a wood grain top panel, carved into a three dimensional ‘S’ shape and trimmed with silver. As we pulled the heavy little slab from its tight encasement, we were met by a shimmering silver speaker grill stretched across smooth, flowing curves, and sharp borders. A false cardboard bottom beneath the speaker covered a collection of accessories, including a DC power supply and removable cable, a small remote control with battery, a 13-pin Apple USB cable and two packets of instructions.

The Wren V5AP is a gorgeous little speaker that blends retro-futuristic accents with a classically styled, bamboo veneer (the speaker is also available in rosewood veneer). Holding true to the sleek minimalism we’ve seen in many of our favorite new audio devices, the speaker’s exterior frame is succinct, interrupted on its front side only by a small column of silver control keys and pinpoint LEDs. Sunken into the speaker’s right edge are control buttons for power, volume, and source, with a corresponding array of LEDs.

The cabinet itself is constructed from half-inch laminated MDF, braced to prevent resonance. Beneath the glittered front screen rests two 3-inch drivers and two 19mm tweeters. The speakers are powered by a class-D amplifier with 25 watts per channel and a proprietary DSP called “Intersil D2.” A 4mm silicone pad along the bottom surface of the speaker is also employed to help eliminate unwanted sound transference.

At the back of the device is a small recessed bay with ports for the power supply and the speaker’s two input sources, including a USB connection and a 3.5mm aux input. Also at the back is a small ovular bass port, bordered in black plastic. A small black setup button at the far side is used to help connect an iOS device to the speaker over a local Wi-Fi network.

The V5AP’s tiny silver remote hosts all controls necessary for basic navigation when the speaker is connected to an iPhone, iPad or iPod via USB. At the center of the remote is a circle of keys including volume, play/pause, and song search. Shuffle, repeat, and mute keys line the bottom row, and a red power button and silver source key fitted at the top of the small white panel complete the design.

Programming the V5AP to play on a wireless network is among the simplest AirPlay setups we’ve come across. For those unfamiliar, Airplay is Apple’s proprietary wireless protocol. Since most of us have our smartphone’s connected to our home network, adding the V5AP into the mix is extremely easy. Connection is accomplished by simply powering the speaker on and plugging the iOS device into the USB port at the back. Then a quick touch of the Setup key triggers a prompt on the iOS device to ask if you want to allow the V5AP to join the network. Once authorized, the speaker is ready for action within seconds.

The V5AP’s crystalline Airplay signal was top shelf, allowing for a fantastic wireless experience with no hiccups aside from a slight shuffle of the music at first connection. As we hopped through various music genres on our iPhone 5, the speaker revealed an accurate and fluid upper register that seemed to pour into our ears like a glacial watershed, rippling with clarity and vivacity. The midrange was thick and warm beneath, bringing a blend of dry force, matched by just enough high-end sparkle to create an almost live presence from the music.

The speaker did a gorgeous job with percussion, thanks in large part to the brilliant high end. Snare and toms were rendered with thick, organic dimension, and crash and ride cymbals were revealed with clean and well defined stick work that seemed to develop right before our ears. Listening on, we heard similar clarity and definition in all high frequency instruments, as the speakers rendered everything from synthesizers, to marimba with pristine detail.

Acoustic instruments were another strong point, bolstered by the warm, pulsing midrange. Guitar and violin were reproduced with tactile delicacy at the attack, while the strings resonated with an underlying brassy glow. And vocals in all genres floated forth in voluminous swells, clearly centered, and impressively articulate.

However, as we dug further into our music catalog, the speaker’s rather contentious relationship with a ballooned lower register began to generate concern. On some of our test tracks, the thumping force of the low end added a rich element of power to the sound signature. Jay-Z’s “99 Problems,” for instance, was impressively reproduced for such a small device, revealing the beefy crunch of the bass lines and distorted guitar with excellent instrumental separation.

But when it came to booming, resonant frequencies like stand-up bass, or catacomb keyboard lines from reggae tracks, the speaker began to falter. The small port at the plastic back panel seemed unable to handle the full breadth of force from what increasingly revealed itself as excessive port noise. An insidious buzz, emanating from the back, began to creep its way forward, distorting the otherwise transparent and rich sound signature. We were able to temper some of the distortion by pulling the speaker away from boundaries, but it was too strong to eliminate entirely.

With a gorgeous aesthetic, beautifully rendered mid and high frequencies, and nearly-flawless wireless sound delivery, Wren’s V5AP has a lot to admire. In fact, this speaker came extremely close to earning our Editor’s Choice award. Unfortunately, the almost inescapable port noise it generates when producing bass gives us real pause. We thoroughly enjoyed a lot of what we heard, but at $400, the bass buzz that continued to sneak its way into the music was, tragically, just too obvious to ignore. We hope Wren can resolve the issue on its next offering.

For those whose musical preferences involve selections with little bass, the Wren V5AP could be a great choice. Otherwise, we think those looking for elegance and performance in a mid-level speaker might be better served by the safer and better balanced Bowers and Wilkins Z2, instead.