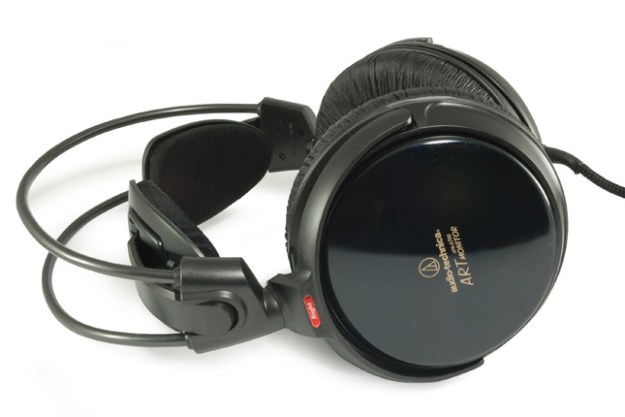 “The close-backed ATH-A700 outperforms its open-backed cousin in every way, seizing a deserved spot at the top of the heap for this price range.”

A close cousin to Audio-Technica’s ATH-AD700, the ATH-A700 read as if they are simply the close-backed version of the same headphone. On closer inspection however, we discovered several key differences which help to earn the A700 a much higher rating than the rather disappointing, open-backed AD700. In our review, we hone in on these key differences to expose what makes the A700 a far superior buy for just $20.00 more.

As with the AD700 headphones, Audio-Technica has foregone premium packaging efforts in order to keep the cost of the A700’s down. The headphones are packaged in a rather simple box. Just like the AD700, pulling back the Velcro-secured door reveals the headphones behind a clear plastic window. Alongside the cans is a single 1/8-inch to ¼-inch adapter for use with home audio and studio equipment, but that is all — no storage pouch or case. Unlike the AD700, the A700’s forego a flashy purple ear-cup backing in favor of a deep midnight, blue which is so dark that, from a distance, it would be easy to mistake for black were it not for the tasteful metallic fleck accents. As a result of this superior finish, the headphones exude a class that went missing from the AD700.

The ATH-A700’s utilize a large 53mm driver that is angled back toward the ear from within the ear-cup. The inside of the ear-cup is heavily padded, and lined with a leather-like material, instead of the coarse velvet that lines the AD700 ear pads. The cloth-covered cord, which leads off of the left side earphone, stretches an impressive 10 feet and is terminated with a 1/8-inch mini plug. Here, Audio-Technica has employed a more commonplace 1/8-inch jack and ¼-inch adapter, rather than the threaded type found on the AD700. As a result, we had no problems fully inserting the native connector into our iPhone, iPod Touch or headphone amplifier.

The ATH-A700, like the ATH-AD700, ATH-AD500 and ATH-W5000’s, utilize two “3D paddles” mounted to a frame to support the headphones on the head. The idea is that the paddles should flex to provide just the right amount of resistance at just the right point on the head, so as to minimize wearing fatigue. As such, there is no option for adjusting the size of the headband; it is fixed to the ear-cups. For some reason though, the paddles on the A700 appear to be bent inward and downward at a steeper angle than those found on other headphones in the Audio-Technica line.

The extremely large, circumaural (around the ear) headphones still have a slightly bulky feel which may take listeners some getting used to. That said, we think that the headphones are comfortable enough that they are as easily adjusted to as any other large circumaural headphone.

In our review of the ATH-AD700’s, we struggled to understand the use of the 3D paddle suspension system. It fit so poorly and was so frustrating that we often found ourselves eager to remove the headphones. We appreciated the intent to strategically place weight on the head where it would fatigue the listener least, but its execution missed the boat big time. Fortunately, the A700 do not suffer from the same problem. We believe the steeper angle of the support pads explains the difference, but regardless, the A700’s are considerably more comfortable. While the sensation takes a little bit of getting used to, we did find that A700 sat securely enough on our head for us to move about without concern that they would fall off. Unlike the AD700, which were barely stable enough for us to turn our head without falling off of our head, the A700 had a solid feel, without coming off as heavy or cumbersome. The “pleather” ear-cup material that is used instead of the velvet found on the AD700, is soft and comfortable enough for long listening sessions. Our only complaint came when we noticed accumulation of perspiration between the pleather and our skin toward the inner diameter of the earphone. A quick 10-minute break alleviated the problem. Finally, we found the seal of the A700 to be very good. Whether this is attributed to the superior support or more appropriate ear-pad material, we aren’t certain. We can say, though, that the seal provided by the A700 did a great deal to improve bass response and assist in blocking outside noise — both critical components of performance for a closed-back headphone.

Since the ATH-A700’s are a closed back headphone, we were curious to see what sort of bass response they offered. With the open-backed AD700 model, we enjoyed the even bass response because it exhibited no bloat or boominess; though we also felt it was a little on the lean side and not likely to satisfy those with a big appetite for bass. With the A700’s, the closed-back design manages to kick the bass up quite a few notches but, much to our delight, the standing resonances and resulting muddiness that often accompanies a closed-back approach was nowhere to be heard. Surprisingly, the A700 offered just the right amount of growl and punch without ever getting in the way of the lower midrange region.

Speaking of midrange: The A700’s offer the same lush, tuneful and life-like midrange characteristics as the AD700’s. Vocals are remarkably clean and full, while string instruments take on body warmth not often heard with smaller cans. Even brass instruments benefit from the even timbre of the A700’s. For midrange aficionados, the A700s are a serious competitor in the sub-$500 category.

And so we come to the treble attributes of the A700. We had major concerns here, as the AD700 model were extremely aggressive and bright — enough to overshadow the excellent midrange and adequate bass qualities it exhibited. With the A700, however, much of this out-of-control treble has been quelled. Whether it is due to the closed-back design, or enhanced bass response, we are unsure, but without a doubt the A700 exhibit a tighter control on the highs. Instead of sounding brash and thin, the treble offers a generous amount of sparkle and plenty of high end texture. Our only criticism of the A700’s sound production would have to be at the extreme high-frequency portion of the sound spectrum. We found that the A700 were a little harsh with loud, sibilant sounds found in closely recorded vocals, and super hot recordings. Still, this accounted for just a sliver of our listening experience and wasn’t enough to put us off of the A700’s otherwise unexpectedly stellar sound quality.

As good as the A700’s are, they are not without a few shortcomings. For instance: Like the AD700’s, the A700’s do not fold down, nor is there a case for storing them. Also, the A700’s aren’t the most sensitive headphones, so they require more power from their sources to reach their full potential. During our testing with an iPhone and iPod touch, we had to max out the available volume to get the sound pressure level we needed. As we overextended the iPhone’s admittedly limited built-in headphone amp, the sound quality degraded considerably. When connected to a more powerful source, such as our headphone amplifier or A/V receiver, the sound quality was dramatically improved.

The ATH-A700’s succeed in every aspect that the AD700’s fail and, as such, are a radically superior headphone. Given their excellent sound quality, adequate sound isolation, comfortable fit and solid construction, we are happy to say that the AD700’s are an excellent headphone and a slam dunk value at an M.S.R.P. of $179. While they are slightly bulky, do not fold down or come with a storage option, the A700’s solid sound quality is enough to earn them a spot on our recommended headphone list. We suggest that anyone looking for a large headphone with even bass, lush mids and sparkling highs should give the A700 a thorough test drive.