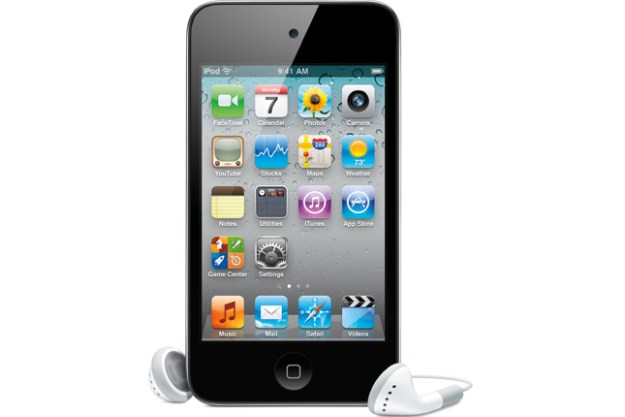 Three years after Apple stretched the definition of “personal media player” to new heights with its class-leading iPod Touch, other manufacturers are just starting to catch up with Android-powered mini tablets. Despite the added competition, the latest revision of the device stays true to its award-winning heritage while folding in even more trickle-down features from the latest iPhone, yet again securing it a place at the top of the MP3-player pyramid.

Since the birth of the iPod Touch in 2007, Apple has essentially pitched the device as an iPhone Lite — a touch screen computer without all the messy contracts of a telecom device. And the latest additions follow the same formula.

Like the iPhone 4, the fourth-generation iPod Touch gets a 3.5-inch Retina display, a forward-facing camera for videoconferencing, a rear camera that shoots 720p HD video, and it runs iOS on a hotrod A4 processor — all upgrades from the version available last year.

But a handful of spec omissions continue to separate the $229 (for a 8GB model) player from the $599 phone. Most notably, of course, it relies on 802.11n Wi-Fi for connectivity rather than AT&T 3G. It also lacks a GPS chip, the rear-facing camera shoots a scant 0.7 megapixels instead of 5.0 megapixels, and, the screen, though identical in resolution, is not an IPS display, which has some minor consequences for viewing angles.

As with features, the design of Apple’s iPod Touch has traditionally followed close behind the boot tracks of the iPhone, but the latest model actually puts a bigger gap between forerunner and follower. Rather than converting to the squared-off, slab-side design of the iPhone 4, this year’ iPod Touch sticks with the rounded edges of its predecessor, and measures only 0.28 inches thick.

One one hand, the tapered edges contribute to a super-slim design that make the iPod Touch feel downright futuristic. As one person put it, “this is how I want my iPhone to feel some day.” One the other hand… well, you might want to be careful with that other hand. The edges are so incredibly thin, it almost feels precarious to hold it by them, giving you very little solid surface to grab on to. We found ourselves palming it more we than do with the iPhone 4 to make sure it didn’t slip away. Like all things Apple, though, it feels built to tight tolerances and solid, but we’re still not convinced it would survive many trips to the floor.

Apple also passed on the flat glass back of the iPhone 4 in favor of the standard iPod mirror finish, which turns into a scratched up patchwork of grease smudges about two seconds after first picking it up. On the plus side, you can always use it as a mirror to see what you would look like through the window of a New York City subway car.

For both the reasons, a case is almost a must for heavy users.

Like the iPhone 4, the iPod Touch has a dock connector on the bottom for charging, a home button below the screen, and a power button up top, but the headphone jack has been moved from the top to the bottom, beside the dock jack. Attempting to build the buttons and jacks into the rounded-off profile leaves them awkward looking — especially the precariously shallow dock and headphone jacks that leave half the metal on their respective connectors exposed.

You’ll need to download iTunes and connect your iPod before you first use it, and register before you add any content. Through a series of wizards, Apple makes it possible either to automatically sync all your content as you add it to the various libraries managed by iTunes, or add it manually as you comb through your library. Unfortunately, all media management must be done through iTunes, as Apple doesn’t support the standard drag-and-drop management you might find with players like SanDisk’s Sansa line. We’re not particularly fond of the bloated-feeling software that has become as much a storefront for Apple as a useful utility for iPod owners, but a thick library of support documents and relatively intuitive operation make it easy enough for novices to pick up.

Apple keeps a bit of an iron fist on the iPod, which can prove frustrating if your library of consists of anything other than a $785 folder full of shiny files downloaded from the iTunes store. WMV and WMA files get the boot, as do audiophile-friendly FLAC and OGG files, all of which most Android players (and even cheapies like the $40 Sansa Clip+) will handle without complaint. On the visual side, the iPod supports only MPEG-4, H.264 and M-JPEG video, which means you’ll need to transcode from popular formats like DivX and Xvid. To be fair, the same video formats also trip up competing Android players, giving the iPod Tough relative parity in that regard.

As a personal media player, the iPod Touch’s display resolution of 960 x 640 pixels stands above just about just about every competitor. Even much larger tablets like the Archos 70 offer only 800 x 480 resolution, allowing the iPod Touch to display more detail than devices with literally four times the display area.

Besides translating to clearer videos and photos, the extra resolution really pays off for reading and Web browsing, where more of a page not formatted for mobile screens can be packed in, minimizing scrolling. Text also remains readable down to the size of directions on a pill bottle — if you have good eyesight, anyway.

Although it lacks the IPS display found on the iPhone 4, the viewing angle for the iPod Touch remains quite good — certainly enough for two people to enjoy the same movie side by side on an airline flight. Tilt it a little further, though, and it begins to distort where the iPhone 4 would maintain a perfect image. At full brightness, the iPod Touch screen also appears slightly more washed out than the iPhone 4, but still ranks excellent beside other comparable players. Unless you own both Apple devices, you would be hard pressed to even tell the difference.

As slick as ever

Anyone who has ever toyed with a touch-based iDevice in the last three years will feel right at home on the iPod Touch, which uses the same iOS operating system that has secured Apple domination in portable devices.

Colorful icons, fluid motion and natural multitouch interaction characterize the iOS experience, which carries right over to multimedia access. Dedicated icons for music and video remain at the bottom of the menu at all times — a marked difference from the communication-centric iPhone, allowing quick access to media sorted by artists, songs, album and more. For large libraries, a flick to the left from the main menu also allows you to search the entire phone for media with a few quick taps of the easy-to-use on-screen keyboard. Breezing through content on the iPod Touch is almost as effortless as using a PC, minus the optional “folder view” that some other players provide — an impossibility on the iPod since Apple flattens folder structures in favor of tags.

Right out of the box, the iPod Touch includes features like a calendar, e-mail, photos, YouTube, stocks, maps, videoconferencing, weather, notes, and voice recording. But as any iOS user knows, these barely scratch the surface of the possibilities for the device, which can just as easily turn into a sonar ruler, level, bike computer, remote control, blood alcohol calculator and about a thousand other things, not to mention what is quickly becoming the world’s preeminent mobile gaming platform.

It is, in short, a fully functioning pocket computer, and a pretty damn quick one this year thanks to the addition of Apple’s latest A4 processor, the same silicon powering the iPad. While sticking to the installed apps rarely allowed previous iPods to butt up against the performance of their slower processors (music playback isn’t all that demanding), the A4 shows its prowess in effortlessly handling apps that take advantage of the higher resolution display without chugging, all the way up to 3D games like Epic Citadel that challenge gaming platforms like the PSP for life-like graphics.

Considering an iPhone 4 retails for $599 without contract and the iPod Touch starts at just $229, Apple clearly had to cut a few corners somewhere. And much of it seems to come from the iPod Touch’s prowess as an imaging device.

While both devices use identical VGA images on the front, the iPod Touch shoots only 960 x 720 stills with the rear camera, or 0.7 megapixels. The gap in resolution and quality clearly shows up in side by side comparisons, where the iPod Touch’s shots look smudgy, granulated and too dark. While they’re usable, they’re typical cellphone fare.

Video produces less of a marked difference. While iPod Touch videos are slightly fuzzier than iPhone 4 videos, the iPod actually seems to do a better job keeping focus and adjusting exposure on the fly, even if it seems to favor a slightly more washed-out look under ideal conditions. Bottom line: it’s hard to argue with 720p HD video from a media player.

The front-facing camera appears to be identical to the model on the iPhone 4. It does a fine job coping with odd lighting (like backlighting from windows and the sky) and VGA resolution proves perfectly adequate for videoconferencing with FaceTime, where bandwidth is frequently a bigger limitation than image quality.

Apple advertises 40 hours of audio playback and up to seven hours of video playback from the iPod Touch, gaining a whopping 10 hours of audio and one hour of video from last year. Anecdotally, both seem accurate, giving it surprising endurance. Just be warned: Like the iPhone, liberal use of Wi-Fi and games can chew your battery life into the red before you know it.

Apple was really the first to imagine that a personal media player could also be a pocket computer, and the iPod Touch remains one of most versatile pieces of hardware you can drop in your pocket for $229. The Victorinox of digital Swiss Army knives retains its well-deserved reputation. Though it faces increased competition from a growing pool of Android tablets like the Dell Streak and Archos 43 (not to mention the Zune HD if apps aren’t your thing), the iPod Touch’s proven form factor and the multimedia prowess of iOS have kept the latest version at the top of its game.

Topics
Video-editing app LumaFusion to get a Galaxy Tab S8 launch
Microsoft Teams may liven up meetings with casual game integration
iPadOS 16: Everything we know about the iPad’s next update
MacOS Ventura is official, with more ways to be productive
Cursive note-taking app now on all compatible Chromebooks
Upcoming RTX 4070 may not succeed unless Nvidia makes a key change
Returnal might be the first PC game to recommend this much RAM
Best Samsung Galaxy Note 20 deals for December 2022
Bad news: AMD may have launched RDNA 3 before it was quite ready
Microsoft Teams Premium uses AI to automatically recap your meetings
Intel’s upcoming laptop CPU may destroy even the best desktop chips
Boston Dynamics’ festive robot video has a surprise ending
Overclockers surpassed the elusive 9GHz clock speed. Here’s how they did it