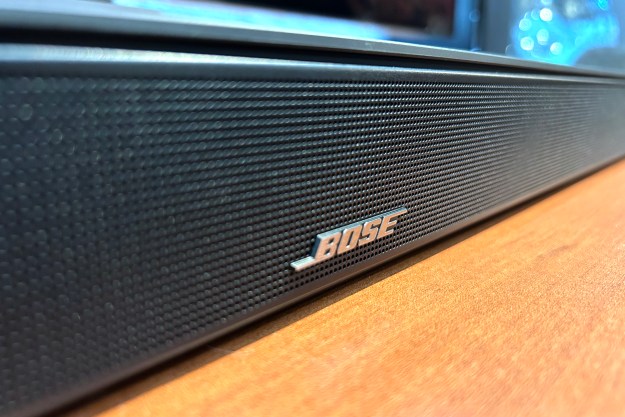 “For small-to-medium-sized rooms, it's got all the presence and punch you need.”

It doesn’t matter whether a company is selling a pint-sized Bluetooth speaker or a multi-component home theater system with hundreds of watts of power, you will inevitably see the words “room-filling sound” used to describe it. It’s so pervasive, the term has kind of lost its meaning.

But one listen to the new $499 Bose Smart Soundbar 600, and you quickly realize there’s no better way to characterize what this compact, Dolby Atmos soundbar does for movies, TV shows, and music. It’s not without a few flaws, but what it gets right more than makes up for where it goes astray.

The Smart Soundbar 600 effectively is a Dolby Atmos-enabled version of Bose’s Smart Soundbar 300. They’re identical in size and shape, which explains why the two speakers share the same $499 regular price.

Like the 300, it has no HDMI inputs, just a single HDMI ARC/eARC output. So take note: If your TV can’t process or pass Dolby Atmos through to an attached speaker, you won’t be getting Dolby Atmos sound from this soundbar. There’s an optical connection too, which is fine if you only need Dolby 5.1, but optical connections can’t handle the extra bandwidth requirements of Dolby Atmos.

There’s no ethernet connection either, so if your Wi-Fi isn’t rock-solid near your TV, or heaven forbid, you don’t do Wi-Fi at all, the Smart Soundbar won’t be able to access the internet. Without internet access, you’ll be locked out of virtually all its settings, which are controlled exclusively by the Bose Music mobile app for iOS and Android. No internet also means you won’t be able to use streaming music services unless you connect your phone to the speaker via Bluetooth — more on that later.

There are exactly zero day-to-day controls on the soundbar itself, save for the mic mute and voice assistant activation touch controls, so make sure you don’t lose the included remote, which is easier to do than you might think. It’s tiny.

These quibbles aside, Bose makes setting up the Smart Soundbar 600 very easy — again, as long as you have Wi-Fi. It’s all done through the Music app and takes only a few minutes. Inside the app, you get access to a generous number of settings, including the ability to set the individual levels of the center and height channels as well as bass and treble.

If you have a subscription to a streaming music service like Deezer, Spotify, Pandora, SiriusXM, or TuneIn, you can play and control your music directly with the app. But for most folks, it will be easier to use the 600’s AirPlay or Chromecast built-in capabilities along with any third-party music app on your phone, like Apple Music.

When it comes to clear dialog, the Smart Soundbar 600 is an absolute rockstar.

The 600 is also Bose’s response to the Dolby Atmos-capable, $499 second-gen Sonos Beam. These two companies have played a highly competitive game of one-upmanship for years, so the pressure was on Bose to differentiate the 600 in a meaningful way.

Its strategy: Replace two of the front-firing drivers from the Smart Soundbar 300’s chassis with up-firing units in order to achieve the overhead sound effects that are so emblematic of the Dolby Atmos format. That’s a bold choice. Most soundbars rely heavily on their front-firing drivers to deliver the majority of the sound you hear. Redirecting 66% of that power away from a front presentation could be problematic.

For its size, I have yet to hear a more convincing Atmos performance.

But it’s a gamble based on a valid concept. Sonos’ Beam Gen 2 doesn’t have any up-firing drivers and relies exclusively on Dolby Atmos virtualization, a software-driven way of tricking your brain into thinking that some of the Beam’s five front-facing drivers are bouncing sound off the ceiling. In theory, Bose’s dedicated up-firing drivers should do a better job, at least as far as creating an immersive 3D sound is concerned.

Did that gamble pay off? In most of the ways that matter, I think it did. The Smart Soundbar 600 possesses a remarkably tall and wide soundstage. Bose has always been highly adept at shaping sound to create the illusion of so-called phantom surround speakers in your room, and with the 600’s up-firing drivers, that illusion now extends to the ceiling.

Neither the 600 nor the Beam Gen 2 can do full justice to a Dolby Atmos soundtrack — for that, you really need a Dolby Atmos AV receiver and a set of dedicated 5.1.2 or better speakers (including ceiling-mounted units) — but for its size, I have yet to hear a more convincing Atmos performance than the Smart Soundbar 600.

I want to offer one small caveat: Bose doesn’t include any room correction function on the 600, unlike the microphone-based Adaptiq system that accompanies the more expensive Smart Soundbars 700 and 900 or Sonos’s app-based TruePlay system. So you may have to do some fiddling with those level controls I mentioned to get things dialed in for your space.

The Bose 600 throws overhead Atmos sounds better than the Beam Gen 2 — especially higher frequency ones like bullets ricocheting or missiles shrieking (No Time To Die is a great example) — and when it comes to clear dialog, the Bose is an absolute rock star. I had to crank the treble on the Beam just to come close to the 600’s default clarity.

Those up-firing speakers also helped the Bose position the source of the dialog above the speaker itself, making it seem as though it was coming directly from the actors’ mouths.

Thanks to Bose’s TrueSpace tech, even non-Atmos content possessed a much more immersive quality, which makes sense; those up-firing and side-firing speakers are there, so you might as well use them.

I was expecting the Beam to outshine the Bose in low-frequency sounds — it has a larger enclosure which can help with this task — but the Bose is shockingly good for bass. It won’t rattle your windows or shake your sofa, but the low end can be heard perfectly well, even at lower volumes.

Speaking of volume, one complaint I’ve read about the Beam is that it doesn’t get loud enough for some folks. The Bose 600 suffers no such problems — at 50% volume, it’s much louder than the Beam.

There are some tradeoffs. By not moving sound around quite as much, the Beam Gen 2 sounds fuller, with more detail in the midranges. It also presents a more cohesive, cinematic experience across those all-important front left/right channels. While screening Denis Villeneuve’s Dune, the Bose let me appreciate the whizzing movements of the insect-like ornithopters, but the Beam communicated the soundtrack’s emotion with greater punch.

It should be no surprise then that, when it comes to straight-up music listening, the Beam has an advantage. Its sound signature is warmer and richer, a signature Sonos tonal quality that many have come to love. I wanted very much to disable Bose’s TrueSpace function, to see if it would make a difference, but that option isn’t available — it’s always on, even for stereo music.

That said, if you’ve ever compared Bose’s headphones or earbuds to those from Sony, the same tonal observations are true, and that hasn’t stopped Bose from earning a loyal following. If you like the “Bose sound,” the Smart Soundbar 600 won’t disappoint.

It’s impossible to avoid other Beam comparisons, so let’s address them all.  Size-wise, the Beam is a little narrower but stands taller than the very short Smart Soundbar 600. The 600 is Dolby Atmos-compatible, but the Beam can do Dolby formats and DTS Digital Surround, which might matter to specific audiences like gamers.

If you’re an Android user, the Smart Soundbar has an edge with both Bluetooth and Chromecast (both of which are lacking on Sonos products), so you’ve got more ways to connect. You can also connect to more kinds of devices. Bose’s SimpleSync lets you pair a compatible set of Bose Bluetooth Headphones for private listening — ideal for when you want the full theater experience without waking your housemates or neighbors.

The Smart Soundbar 600 can be used as a smart speaker, just like the Beam, but Bose has dropped Google Assistant as an option, and unlike Sonos, it doesn’t have its own native voice assistant. This leaves Amazon Alexa as your only choice for turning the 600 into a self-contained smart speaker.

It’s worth noting that the soundbar is still compatible with Google Assistant, but you’ll need a Google speaker, like a Nest Mini, if you want to use Google to control the 600 for music streaming.

With support for Alexa, Google, and its own Sonos Voice Control, that puts the Beam well ahead in the smarts department, save for one pretty cool feature: If you use Alexa on the Smart Soundbar 600, you can enable Bose’s Voice4Video function, which lets you control a connected TV and a cable/satellite box using just your voice. I had some technical difficulties getting it set up on this soundbar, but I’ve used it on the Smart Soundbar 300, and it worked well.

The other major difference between Bose and Sonos is multiroom audio. If you don’t want or need to control multiple speakers in your home, this is irrelevant. But if you do, Sonos’s platform is far more powerful and easy to use. It’s also vastly superior if you want to juggle multiple streaming services and/or your own music library.

Overall — and despite a few imperfections — the Bose Smart Soundbar 600 is a good choice to turn any small or midsize TV room into an entertaining space for movies, TV, and music. It’s got some of the best Dolby Atmos realism you’ll find in a single, compact speaker, and if you struggle with dialog, it will bring a smile to your face.

I don’t know how much longer Bose plans to sell the Smart Soundbar 300, but given its identical price, the only reasons I can think to choose it over the 600 are you really like Google Assistant or have no need for Dolby Atmos compatibility and would prefer a soundbar that puts an emphasis on forward sound, not 3D sound.