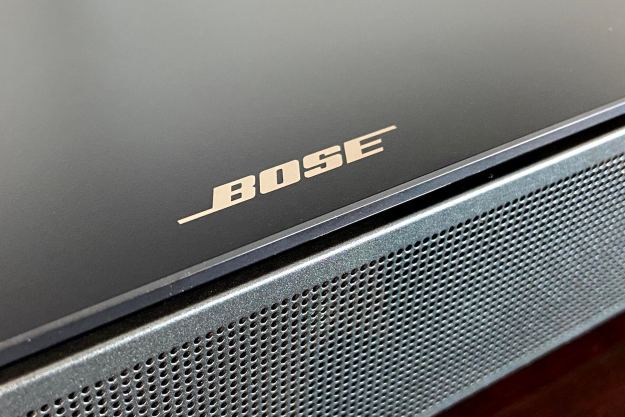 “A bit expensive for what you get, the Bose Tv Speaker is the simplest way to get awesome TV audio.”

Soundbars are a fantastic way of giving yourself much better TV audio without the hassles of running wires or having multiple speakers to contend with. But even in the soundbar world, there are different levels of complexity. Some come with wireless subwoofers, some come with extra surround speakers, and many try to do double- or triple-duty as a smart speaker and a Wi-Fi music system. But what if you just want your TV to sound better, with the least amount of hardware and expense? Bose’s answer is the $250 Bose TV Speaker.

The Bose TV Speaker is packed with two small foam cradles, but the rest is easily recycled cardboard. You get a power cord, a slim remote with a button cell battery preinstalled, an optical cable, and a quick start guide. Oddly, even though the TV Speaker has an HDMI ARC input and an auxiliary analog input, Bose doesn’t include HDMI or analog cables.

Even though the Bose TV Speaker lacks many of the features found in the company’s higher-end range of smart soundbars (the 300, 500, and 700), its design and styling puts it firmly in the same family as these pricier speakers. Its low-profile, perforated metal grille and completely smooth top surface give it a sophisticated, premium vibe. The matte-black plastic shell calls no attention to itself, which means all of your attention will be on the sound, not the speaker, as it should be.

At just over 23 inches wide and a hair over two inches tall, it will easily fit in front of TVs as small as 32 inches without blocking the bottom of the screen, something that could occasionally have been a problem with its predecessor, the Bose Solo 5 TV sound system.

If you choose, you can mount the TV Speaker using the same $40 wall-mount kit that Bose sells for its other soundbars.

The beauty of a soundbar as simple as the Bose TV Speaker is that setting it up is as easy as it gets. Plug the speaker into your TV using the provided optical cable , or your own HDMI or analog cable, and then plug the speaker’s power cord into the wall. Congrats, you’re done.

The TV Speaker automatically senses which of these three connections you’ve chosen to use, so there’s no need to select the right input. But neither are you restricted to using just one. If you want, you can connect separate audio devices to all three. The catch is that the TV Speaker will default to the first one it detects as active. So if you’re playing TV audio from HDMI ARC, and want to switch to a CD player over the optical connection, you’ll need to turn off your TV first, and then hit play on the CD.

Having HDMI ARC is a nice option, especially if your TV doesn’t have an optical port, but the lack of an HDMI input means you’ll be giving up a precious HDMI input on your TV just for the speaker. Given that the TV Speaker doesn’t support any of the high-bandwidth audio formats that HDMI ARC enables (like Dolby Atmos), you may simply be better off using the optical connection if you can.

There’s a dedicated subwoofer output that can be used to connect a Bose Bass Module 500 or 700 via an optional $10 cable.

You also get Bluetooth. This can be used as a wireless connection for streaming music from a phone, tablet, or computer, but it also lets you connect the TV speaker as a companion device to a Bose smart speaker or soundbar using the Bose Music app.

Speaking of Bluetooth, the one thing I dearly wish Bose had included is the ability to pair a set of Bose wireless headphones, as you can do on the company’s smart soundbars. Given that the TV Speaker is going to find itself in a lot of bedrooms, this would have been a terrific add-on for private TV listening.

If all you want to do is hear your TV through the Bose TV Speaker, there’s almost nothing you need to do, especially if you’re using HDMI ARC. That connection lets your TV’s remote control send volume and mute commands to the speaker, which are all you need for basic operation. As a bonus for Roku TV owners, the TV Speaker is Roku TV ready, which means all of the speaker’s functions can be controlled using on-screen menus and your Roku remote.

There are no physical controls on the soundbar at all — just two LED indicators on the front left corner to tell you when the speaker is on, muted, or using Bluetooth.

The included remote control isn’t backlit, but the main volume and mute buttons are easy enough to identify in the dark thanks to their layout and recessed design. The remote lets you activate Bluetooth mode, switch the speaker into dialog enhancement mode, and adjust the amount of bass, all of which are effortless to do.

The Bose TV Speaker is about as hands-off as a soundbar gets, which is exactly what some buyers want.

In keeping with the TV Speaker’s focus on simplicity, you don’t get any audio extras — no Dolby Digital, no Dolby Atmos, no DTS:X — heck, there isn’t even a virtualized surround mode that pretty much every $100 soundbar offers these days.

What you do get is excellent 2-channel stereo sound that makes watching TV far more enjoyable. Bose has always been able to coax small speakers into producing big sound, and the TV Speaker is no exception. There’s no built-in subwoofer and yet the soundbar manages to produce plenty of low-end — especially if you max out the bass adjustment.

The two angled, full-range drivers provide a sense of width and depth that at times surprised me with its realism. At this price, it would have been nice if Bose gave us the ability to control other aspects of EQ like treble and midrange, but given how well-balanced the speaker is right out of the box, I doubt I would fiddle with them even if I had them.

The dialog mode does exactly what you’d expect, enhancing the upper registers where voices tend to live while deemphasizing the other soundtrack material.

Unlike some other dialog adjustments I’ve tried, which can end up producing a harsh, brittle sound, the Bose TV Speaker simply delivers cleaner, more intelligible speech.

The TV Speaker can definitely get loud enough to fill even big rooms with sound — and it does so with virtually no distortion — but its sweet spot is smaller spaces, like bedrooms or dens. It’s in these rooms that the speaker really shines, providing a noticeably wider and deeper soundstage than a standard TV, without having to rely on pure power to do the job.

Can you use the Bose TV Speaker for music, too? Absolutely. Streaming from sources like Tidal, Spotify, and YouTube Music over Bluetooth sounded very good, though unlike Bose’s Soundbar 700, which does an incredible job of revealing hidden details in my favorite tracks, the TV Speaker simply offers decent stereo sound from a single speaker. Not that there’s anything wrong with that.

While the Bose TV Speaker may be considerably more expensive than bigger, bolder soundbars that have more features, it’s the perfect TV companion for those who are short on space and patience, and big on sound quality.

If a simple TV speaker is what you seek, the Bose Solo 5 TV sound system is still available and is often on sale for less than its $200 regular price. It’s bulkier than the TV Speaker, it doesn’t have HDMI ARC, and it lacks a dedicated tweeter for dialog enhancement.

If you want a soundbar with a similarly small footprint but more features, the $400 Bose Smart Soundbar 300 or $400 Sonos Beam are both excellent options with voice assistants, Apple AirPlay 2, and smartphone apps that let you adjust a variety of EQ and other settings.

Bose products have excellent build quality. I expect the Bose TV Speaker will last as long as you need it to, especially given its simple design and features, however Bose only provides a one-year manufacturer’s warranty.

Yes. Though expensive for what it is, the Bose TV Speaker is a premium and dead-simple add-on for TV audio that makes your movies and shows sound as good as they look.

Topics
The best subwoofers you can buy in 2023
The best Blu-ray players for 2023
The best speakers for 2023: great hi-fi options for music and more
The best gaming speakers for 2023
This massive OLED TV has a $1,000 price cut at Best Buy today
The best TV shows on Amazon Prime right now
Best new movies to stream on Netflix, Hulu, Prime Video, HBO, and more
I replaced my kitchen TV with an Echo Show 15 — and I kinda liked it
The best HDMI cables you can buy in 2023
Why the Nest Hub Max still rocks as a kitchen TV
Stream live sports without cable with Sling — now 50% off
OnePlus Buds Pro 2 to support Android’s new spatial audio feature
Should you mount your TV above a fireplace?