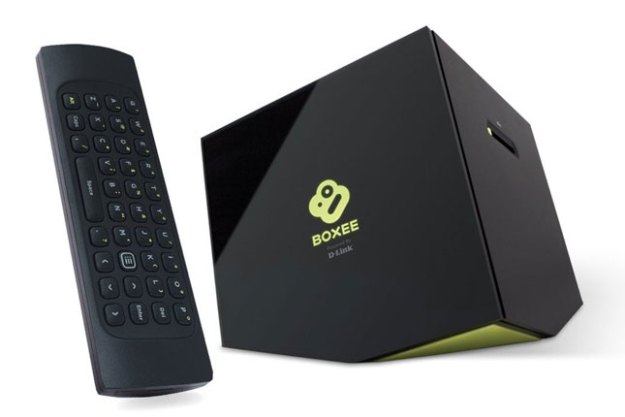 “D-Link’s Boxee Box stands as one of the most ambitious set-top boxes out there, but its glossy front end hides mechanisms still seemingly stuck together with chewing gum and duct tape.”

Feeling stifled by the narrow scope set-top boxes like Apple TV, but not quite ready to start stuffing circuits into a box to build your own home theater PC? D-Link pushes forth an unlikely solution with the funky and curiously geometric Boxee Box, which promises the control and flexibility of a desktop program packed into a standalone box. While it somehow manages to fall a little short of both, plenty of digital entertainment gurus will still find plenty to like in its imperfect middle ground.

Boxee is no more unique to the Boxee Box than Windows is to your Dell laptop. It’s just software, and Boxee has actually been distributing it for free on Linux, Windows and Mac OS X since 2008. A cult following ensued and D-Link picked it up for the Boxee Box in 2010, the first set-top box to use the software Boxee had been vetting on the desktop for years.

Boxee’s basic goal is to play everything. Locally, that means everything from common DivX files to the rare and mysterious VOB (the only thing it won’t handle locally is iTunes servers). In this world of ubiquitous broadband and streaming though, it also increasingly means access to streaming sites like YouTube, Revision3 and Pandora. Boxee also includes social networking features to see what your friends are watching and vice versa, and apps for letting developers expand the capabilities of Boxee. We’ll get to these features more later on.

We delayed reviewing the Boxee Box when it launched in November because it lacked even Netflix – a vital feature we were frankly in disbelief that D-Link had the chutzpah to ship it without. Boxee finally added Netflix in February, but Hulu, Hulu Plus and Amazon Video on Demand all remain missing in action.

Most of the set-top streamers we’ve had the opportunity to review share a common goal: invisibility. Through a combination of small size and generic designs, these book-sized boxes have been engineered to disappear into the tangle of receivers, Blu-ray players and game consoles below any given TV like they don’t even exist.

Not the Boxee Box. In a rather bold move, D-Link’s take on Boxee pulls the opposite effect. Think less “chameleon in a rain forest” and more “zebra in a disco.”

True to the Boxee Box name, it’s basically a cube, flipped on edge and cut down to look like it’s sinking into the tabletop. Square, yes, but totally off the axis you’re used to dealing with. Digging this shape from its unique cardboard packaging for the first time, it’s striking how small it feels; you could actually put it in front of many TVs without blocking the picture. The closest thing to the “front” of the box gets a glossy plastic panel with a Boxee icon that lights up from beneath, but the rest has been built from pretty ordinary matte black plastic. Only the bottom gets any color: The rubbery plastic it sits on is an outrageous, Xbox-y green.

To be sure, the style is polarizing. You’ll either love it or hate it. Fortunately, if you find yourself on the more conservative side, the RF remote allows to cram it in the back of a home theater system and it will still work, even if the shape isn’t particularly conducive to it.

Keep in mind that there’s no storage in here. While the Box does have a 1GB flash chip for storing apps and other OS information, the only way to add truly “local” storage is through SD cards and the dual USB ports.

Spin this cube around and you’ll get to the business end. Like the Apple TV, an HDMI port supplies the sole means of connecting the Boxee Box to a television, which means older TVs are strictly verboten. D-Link does however, supply some analog outputs in the form of stereo RCA jacks for audio output, along with an optical audio output, which means older audio receivers are fair game. For moving data in and out, the Box supplies a typical Ethernet jack for Internet access (though Wi-Fi is also standard) along with an SD card slot on the side and dual USB ports in back. The sole button sits on the top face of the cube at the very back, and powers it up.

If you’re wondering what the perfect remote looks like, this is very nearly it. The top of the candybar-sized slab offers a typical five-way directional pad, along with dedicated play-pause and menu buttons. That’s it. Flip it over, though, and you’ll find a whole QWERTY keypad for thumbing in passwords, Web addresses and search terms quickly – the best of both worlds. Using the top buttons becomes second nature within minutes, and the rear keyboard has big, rubbery buttons that make a satisfying snap when you press them. The only thing missing is backlighting, which would come in handy for dim home theater use.

Thanks in large part to this outstanding remote, getting Boxee ready to go is a breeze. You’ll be prompted to connect it to a Wi-Fi network if you haven’t hardwired it at boot, asked to create a Boxee account, and then you’re off and running. We recommend double checking display settings, though – our Boxee initially auto-detected the TV settings wrong and had us in 720p when the display wanted 1080p.

Boxee basically axes the home screen into two panes: A lower scroll bar full of featured videos and apps, and a top bar of every feature, including friends, watch later, shows, movies, apps and files. Intuitively enough, anything you want to access locally falls under “files,” while streaming footage falls under shows and movies, each sorted into their respective categories. Submenus also give you the opportunity to crosspollinate (selecting “files” under shows will display just the TV shows you have stored locally, as will selecting “shows” under TV).

Pressing the remote’s menu button at any time will either send you back a level if you’re browsing through tree-type menus, or pull up a top menu overlay that serves as a shortcut to Boxee’s many nooks and crannies. Similar to Google TV, it also has a universal search bar. Searching for a term, like “The Office,” will turn up any TV results, movie results, and also offer the option to search the Web for that term in Boxee’s own, Flash-equipped browser. Also similar to Google TV, it omits important sources like Netflix, making it more of a first stop for finding content than an exhaustive search.

Boxee breaks the browsing experience into a smoothly tiled interface with box art for every TV show and movie, ratings, run time and episode descriptions. It’s one of the most seamless, uniform ways we’ve seen to navigate content scattered across many different sites in many different formats. But it’s a thin veneer. Playing back anything from the Web inevitably involved opening the browser after selecting what you want.

While it can access any of the same Flash players your computer can, different sites vary in their ability to play nice with Boxee. Open a South Park episode for instance, and Boxee will automatically switch you to full screen and high quality, and the remote will play and pause the video as if it were playing locally. Open other content, and you’ll have to bypass age gates, close ads, manually turn the video to full screen by finding the button in the player, and play and pause the same way. Because you can only move the cursor in one direction at a time with the crude four-way directional controller, doing anything requiring the cursor can be maddening.

To Boxee’s credit, the platform makes an attempt at whipping this wild west of content into standard formats with its app platform. Boxee offers 165 (at last count) apps from content providers like Pandora, YouTube, Netflix and Vice. Each one offers an interface that has been tailored to Boxee, eliminating the need for a cursor, but they still have their shortcomings. Many are just painfully slow to load, and haven’t been developed enough to work smoothly. Others seem to be lacking the same content you could find online. Finally, the universal search can’t reach inside apps (like Netflix), so you’ll have to manually get a feel for what you can get through apps and what you can’t, because your favorite shows could be hiding just out of reach if you don’t dive in.

Even the lowliest set-top box will reach out to network drives to find music and video you want to play back on the big screen, but Boxee outdoes these budget boxes with its interface. Rather than forcing you to locate “127-hours_james_franco_2011_RaDKREWILLERz-rip.mov” by hand, you can tell Boxee to scan directories and find the media, use the Web to “scrape” metadata like box art and descriptions, then display your stuff in the same pretty format it uses for online content. If you wanted to turn your TV into a kiosk for simpletons to watch movies, this is what it would look like. But it has its own set of imperfections.

Boxee won’t always be able to identify every file you pour in the hopper. Sure, that’s like blaming the maid for being unable to put your clean dishes back in the right cabinet every time — it’s pretty amazing Boxee does as well as it does – but some of its failures mystified us. Some shows labeled in the familiar format “Name of show – S1E01 – Name of episode” slipped through the cracks. A manual naming utility makes it fairly easy to take care of any mystery content with some coaching, but be prepared to invest some time to get your whole collection indexed, and more flakiness. “Sorry – Unable to bring the movie details,” Boxee told us when we tried to identify the first episode of The Office. What?

Even less excusable is Boxee’s music player which borders on “glitchy enough to call useless.” Playing certain music files from our network resulted in no sound, the time meter clicking by at 2x speed, and eventual crashing. At other times it froze for 30 seconds at a time on the menu screens. You can’t even queue up songs to play in a custom playlist; albums merely play as they’re arranged.

Network navigation produces similar aggravation at times. Entering a password-protected file server from one route just denied us access, another finally route gave us the opportunity to plug in a password.

D-Link’s Boxee Box stands as one of the most ambitious set-top boxes out there, both in terms of sheer content available and the refinement in its world-class interface. Forget bragging about your Blu-ray rip of Avatar, you’ll zap on the TV just to show off Boxee for friends. But this glossy front end hides mechanisms still seemingly stuck together with chewing gum and duct tape. We were content to grind our teeth and accept the occasional crash and hiccup when Boxee was merely a freebie download for the PC, but after shelling out $200 for a set-top box, Boxee engineers need to get serious and learn how make Boxee work like the appliance it’s being sold as. As Boxee improves the Box’s underpinnings, it may rise to prominence as the preeminent set-top box of choice. The (delayed) addition of Netflix in February proves the team is still hard at work. But in the meantime, be prepared for a rollercoaster ride as Boxee smoothes out the wrinkles.