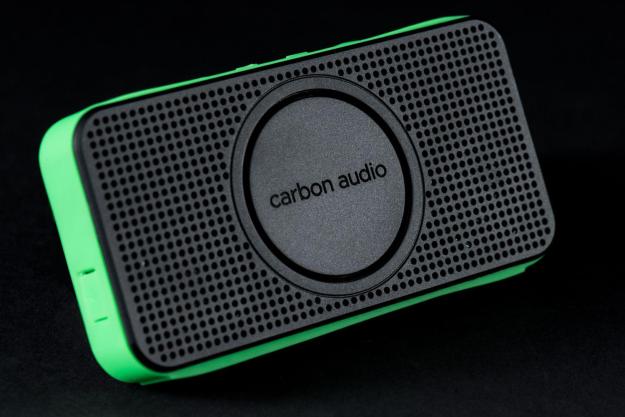 “Long after this speaker’s shock value wears off, it continues to pay dividends thanks to its extreme portability, ample fidelity, stereo pairing capability and excellent speakerphone function.”

Carbon Audio is not what we would call a “bandwagon company.” While others crank out off-the-shelf, cookie-cutter products all willy-nilly to get in on trending categories like headphones and Bluetooth speakers, Carbon Audio keeps it unique. The company takes the time to step back, figure out how to fill a need, and do it in a way nobody else has. With the release of its Zooka, a wireless speaker tube that doubles as an tablet stand or laptop topper, Carbon Audio got itself onto shelves in Apple Stores nationwide, putting itself on the radar of Apple fans everywhere. Now the company looks to capitalize on its newfound recognition with a hot new follow up, the Pocket Speaker.

At ridiculous volume levels (which it is more than capable of) the speaker should last a solid six hours on a charge.

While being small enough to comfortably fit in any pocket seems like an obvious design idea, it is apparently a tricky one to pull off. Sure, there are some portable wireless speakers that will “fit” in your pocket – if you cram them in hard enough – but most are too big to fit in comfortably. The SOL Republic Deck, while super cool, is too big for your pocket (unless you’re bringing parachute pants back), as is, say, the Soundmatters FoxL.

So Carbon’s Pocket Speaker fits in your pocket. Yay. What about everything else? How does it sound? (Spoiler alert: It’s incredibly loud). Is it easy to use? What else can it do? We’ve got all the answers below.

As Carbon Audio tends to think outside the box, it comes as little surprise that it did away with them almost entirely when deciding on the Pocket Speaker’s packaging. The highly-totable sound system comes in a clear plastic case, sitting atop a small rectangular box which holds the package’s only accessory: a USB charging/auxiliary cable. The clear case shows off the speaker well, but don’t judge the speaker’s heft while in the case; the packaging weighs almost as much as the speaker does.

The Pocket Speaker’s rechargeable lithium battery is estimated to deliver up to eight hours of music playback. At ridiculous volume levels (which it is more than capable of) the speaker should last a solid six hours on a charge. The speaker also doubles as a speakerphone.

Recharging the battery takes place via a hybrid USB cable, which is where Carbon Audio hides the speaker’s Aux input; useful for those times when you might want to connect an audio device that lacks Bluetooth capabilities.

Want stereo Pocket Speakers? They can do that.

Want stereo Pocket Speakers? They can do that. Just link two up wirelessly and each speaker will identify itself with a voice prompt as left and right.

Onboard controls include four buttons, one each for power, Bluetooth operation, and volume up and down.

Pairing a device to the Pocket Speaker is as simple as powering up the device, holding down the Bluetooth button for a few seconds, then selecting the speaker in your device’s Bluetooth menu. Along the way, the Pocket Speaker chimes at you with varying sounds to let you know power is on, that it is in pairing mode, and that it has successfully paired with a device. Thankfully, these signal chimes aren’t too loud – that’s an issue we frequently run into with other Bluetooth speakers.

Making a stereo pair out of two Pocket Speakers involves just one additional step. After powering up the two speakers, you must press and hold the Bluetooth buttons on each one simultaneously for a couple of seconds – the speakers do the rest. When the link is established, each speaker will identify itself as the left and right speaker with a voice prompt.

For our evaluation, we used an iPhone 4S, a second generation iPad, an HP all-in-one desktop computer and an Asus Zenbook Prime laptop as sources.

The Pocket Speaker is capable of getting extremely loud – and we don’t mean loud-for-its-size loud, we mean it just gets freakin’ loud. And that’s with just one speaker; add another one and you’re on another level of loudness.

For grins, we paired up two Pocket Speakers and took them out to our sizeable backyard. We began playing some music, set the volume level to about 75 percent, set our phone down and walked a good 50 feet away. The music came through clear as a bell, and it didn’t sound tinny or compacted, either. Sure, there was a lack of bass, but the Pocket Speakers proved to be more than capable of powering up a laid-back backyard BBQ .

The Pocket Speaker is capable of getting extremely loud – and we don’t mean loud-for-its-size loud, we mean it just gets freakin’ loud.

In fact, the Pocket Speaker is the most travel-friendly speaker we’ve evaluated to date. It’s light and compact enough to in your pocket, so it never takes up space in your luggage, and we never found the speaker to be cumbersome.

As for sound quality: We found the Pocket Speaker consistently exceeded expectations. Friends and family were routinely shocked by its output capabilities; and not just its sheer volume, either. Generally folks felt the speaker was clean and clear with just enough bottom end to help it sound full. While it doesn’t bear an audiophile-grade sound signature, the Pocket Speaker is well ahead of its like-priced competition by a healthy margin.

As a bonus, the Pocket Speaker works wonderfully well as a speakerphone. Phone calls were clear on our end, and reports from callers on the other end indicate we came through loud and clear with no echo.

We have but two complaints to mention: First, we wish the speaker could use its battery to charge a mobile device – most competing Bluetooth speakers offer this feature. Also, if you push the speaker too hard with the right kind of music, it can begin to buzz on you, which could easily be misconstrued as a defect. It isn’t – the speaker is simply being pushed unreasonably hard and every device has its limits – but a limiter might have been a good idiot-proofing measure.

The Carbon Audio Pocket Speaker will shock you with its ability to play far louder than its size should allow. But long after this speaker’s shock value wears off, it continues to pay dividends thanks to its extreme portability, ample fidelity, stereo pairing capability and excellent speakerphone function. We’d be amazed if the Pocket Speaker didn’t wind up being one of the most popular holiday gifts this season.