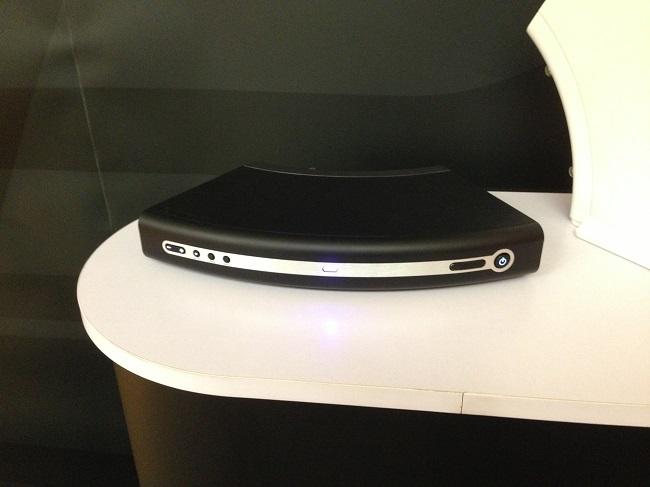 High-end audio doesn’t usually show its face at CE Week, but this week in New York we discovered a little gem tucked away in the corner from British speaker manufacturer, Monitor Audio. As part of its new Airstream series of products (which includes the S300 powered AirPlay desktop loudspeaker system [$500], and ASB-2 Soundbar [$1,600]), is the $500 AirStream A100 Integrated Amplifier.

What makes the Airstream A100 so intriguing – aside from its curved shape – is that the engineers at Monitor Audio have packed so much technology into such a small enclosure; including a 50 watt/channel Class A/B power amplifier. With so many manufacturers pushing Class D amplification at the moment, it is somewhat surprising that Monitor Audio would steer clear of a switching amp which runs cool and opt for this “old-school” approach, but the proof is in the pud…listening. In reality, the rigid polymer and die-cast aluminium chassis acts as a heat sink to help keep the A100 cool and it can be oriented either vertically with the aid of a base or left horizontally on a hard surface.

The Airstream A100 also includes support for Apple AirPlay, DLNA, and is compatible through its control app with both iOS and Android devices. Monitor Audio includes a nifty looking remote with the A100, but the app looks intuitive enough to be all that one will need to control it.

The A100 also features a 24/96 DAC, dedicated subwoofer output, S/PDIF optical digital input, and a single set of analog inputs. There is a USB input, but it is restricted to charging devices and assisting with Wi-Fi set-up. The Airstream A100 also features heavy-duty metal binding posts, not the cheap plastic stuff that some manufacturers are sticking on boxes costing twice the price.

The A100 appears geared toward the Generation Y music listener who wants to stream from their Mac, PC, or smart device, but also wants the ability to expand the system at a later date. Just add something like the  $200 Pro-Ject Elemental turntable, and the $250 Bellari VP130 tube phono stage, and you have the makings of a kick-ass entry-level high-end audio system for under $950.

Throw in a pair of the over-achieving Pioneer SP-BS22 LR bookshelf loudspeakers for $127 and some AudioQuest X4 speaker cables for an additional $100 and you’re done for under $1,200.

Monitor Audio is clearly trying to steal some of the thunder from NAD, which is just about to release the first batch of D 3020 Digital Hybrid Amplifiers into the market for $500 and while the two products share a lot in common, the NAD offers Bluetooth support instead of AirPlay, while the Airstream A100 omits Bluetooth and does not include a dedicated headphone amplifier.

Which one should you buy? We have both scheduled for review this summer and we suspect that it’s going to be a very close race indeed.