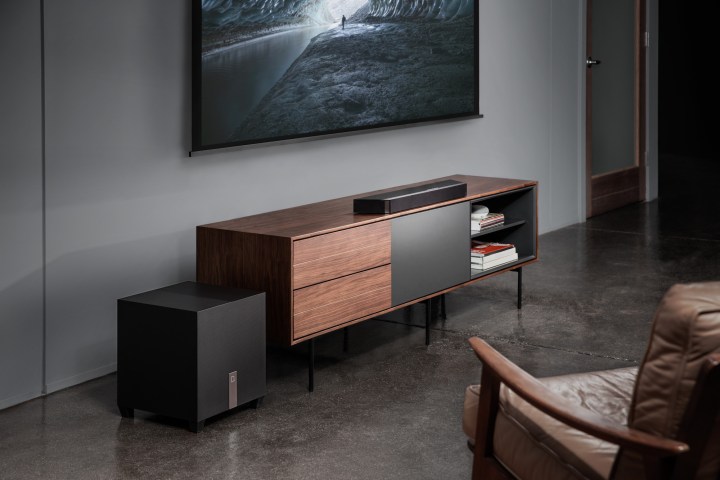 Using a soundbar for immersive 3D formats like Dolby Atmos and DTS:X is the way to go for anyone who doesn’t want the hassle of wiring up their TV rooms with seven or more speakers plus an A/V receiver and a subwoofer. But most Dolby Atmos soundbars are pretty beefy, and the ones that come with dedicated surround speakers still require some juggling of wires, even if they’re just power cords. That’s what makes Definitive Technology‘s new $899 Studio 3D Mini Sound Bar System intriguing. It’s the company’s first Dolby Atmos and DTS:X soundbar, and yet it’s remarkably compact and doesn’t require separate surrounds.

“We added object-oriented audio processing from Dolby and DTS,” said Michael McCole, senior product marketing manager at Sound United in a press release, “and designed a clever driver layout so the Studio 3D Mini could deliver surprisingly convincing surround sound from a soundbar that disappears beneath the television.”

Definitive hasn’t said much about how the Studio 3D Mini manages to pull this off, noting only that the soundbar uses a six-driver array with aluminum tweeters to process a 4.1 channel signal, with the help of a compact, 8-inch wireless subwoofer. Presumably, a good deal of virtualization is happening within the software. The soundbar’s trapezoidal shape and angled sides are a good indicator of how it projects sound around a room — relying on side walls to reflect audio back to the listener.

The Studio 3D Mini Sound Bar has a decent set of inputs and outputs, with an HDMI-eARC/ARC audio input/video output for support of lossless multichannel sound, and an HDMI input that can pass through 4K, Dolby Vision, and HDR10. An optical input, auxiliary analog input, and USB port round out the collection. For wireless audio from smartphones, you can pick from Bluetooth if you’re on Android or iOS, or opt for the iOS-only AirPlay 2.

In addition to offering up Dolby Atmos sound, the Studio 3D Mini Sound Bar takes another page from the Sonos Arc’s playbook: Multiroom audio, thanks to its integration of HEOS software. As a HEOS device, the Studio 3D Mini Sound Bar can become one element in a much larger whole-home Wi-Fi sound system, all controlled via the HEOS app, and compatible with a variety of speakers and receivers from Denon and Marantz.

Technologically, the Studio 3D Mini Sound Bar is a heavy-hitter, but only a full test will tell us if this system is truly competitive with similarly priced Dolby Atmos soundbars.

If we get one in for a listen, we’ll be sure to let you know.

Topics
CES 2023: Dirac Live Active Room Treatment is ANC for your speakers
LG’s giant 97-inch M3 OLED TV eliminates HDMI cables
JBL reveals its new flagship soundbar at CES 2023: 15 channels and 1170W of Dolby Atmos power
LG’s 2023 soundbars go wireless, get on-screen controls, and game-friendly inputs
The best speakers for 2023: great hi-fi options for music and more
The best Blu-ray players for 2023
Why the Nest Hub Max still rocks as a kitchen TV
Stream live sports without cable with Sling — now 50% off
OnePlus Buds Pro 2 to support Android’s new spatial audio feature
Should you mount your TV above a fireplace?
Disney Plus Free Trial: Can you watch for free in 2023?
The best subwoofers you can buy in 2023
The best Dolby Atmos soundbars for 2023