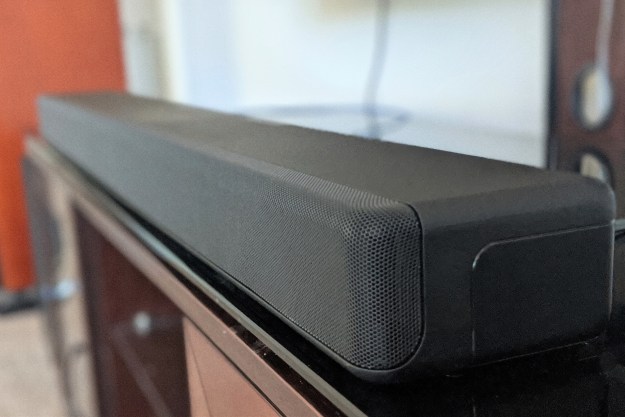 “The Sony HT-G700 stays competitive thanks to its compact design and virtual surround sound.”

Sony has tasked its new soundbar with achieving the near-impossible: Creating the immersive experience of a home theater, without the many speakers that typically work in unison to deliver that kind of sound. To add to the challenge, Sony attempted to do so at a reasonably affordable price point.

With the HT-G700, the company nearly nailed it. While the 3.1-channel soundbar has its physical limitations, it’s got some impressive technology under the hood that not only allows Sony to claim the ability to re-create surround sound and even Dolby Atmos, but also helps this bar deliver big sound in a budget package.

Typically, there’s a lot to unpack with these soundbar systems, but not so with the HT-G700. The entire system is, quite simply, just the soundbar and a wireless subwoofer; there are no rear speakers to unbox and no speaker wires to unravel. Aside from included accessories like a remote control, HDMI cable, quick setup guide, and instruction manual, there’s not much else to it.

For the minimalist who’s more into good sound and less into the elbow grease that goes into setting up a traditionally solid audio setup, the straightforward setup is most certainly a good thing. As easy as this system is to connect for someone who literally sets up soundbars for a living, the HT-G700 is just as simple to hook up for the less experienced.

Both the soundbar and sub require power, and the soundbar needs to connect to your display via HDMI or optical audio cable. That’s kind of it. The subwoofer will automatically connect to your bar, and Sony provides instructions to manually pair the two should that not happen. There’s no Wi-Fi connectivity in the HT-G700, so there’s no app to download or updates to configure. In an age where everything is getting smarter and more connected, soundbars included, the HT-G700 is a modern representation of the plug-and-play systems of yesteryear.

It’s become the unofficial official stance at Digital Trends that aesthetically, the ideal soundbar blends into your existing entertainment ensemble rather than assume the role of spotlight stealer. In this case, the HT-G700 passes this heard-but-not-seen test with flying colors.

Both the bar and the subwoofer are dressed in a sharp black coating, which helps them disappear when the lights go down for movie night. Aside from the soundbar’s front panel that flashes to life when you adjust the volume or access a setting, this system fades into the background of a dark room nicely.

The soundbar itself isn’t much different in size than comparative alternatives. At 38.58 inches long, it’s slightly longer than Vizio’s $500 Dolby Atmos bar, and around the same height at just over 2 inches tall. The subwoofer’s hefty, front-ported enclosure sticks out, however, weighing 16 pounds as opposed to Vizio’s more compact 10-pound woofer.

There are three drivers inside the bar, representing the left, center, and right channels. There are no upfiring speakers, and as we’ve already mentioned, no wireless rear speakers to, well, speak of. From a physical standpoint, it can technically only produce true 3.1 sound, but thanks to some intriguing tech, this bar can at least imitate a much fuller experience.

You can’t scroll through the HT-G700’s product page without multiple mentions of “7.1.2 channel surround sound.” As mentioned, in reality, you won’t get actual 7.1.2 without two pairs of rear speakers, and either height channels or upfiring drivers that bounce sound off the ceiling and toward your ears.

The reason Sony can make these claims derives from a pair of technologies that sit under its “Immersive Audio Enhancement” umbrella. Sony’s Vertical Surround Engine processes sound to virtually add height to a sound field, according to Sony’s manual, while a technology called “S-Force Pro Front Surround” handles the task of creating the illusion of surround speakers.

So, while the HT-G700 can accept a vast amount of audio formats — from Dolby Digital to Dolby Atmos and DTS:X, among others — the only way it can produce those formats is virtually through its processing technology. The bar will automatically process Dolby Atmos or DTS:X content to provide that effect, but Sony doesn’t stop there. By pressing the Immersive AE button on the bar’s remote, Sony says the HT-G700 can upscale even stereo audio to its virtual 7.1.2 sound.

It’s a little sneaky on Sony’s part, since the average person may not do this deep of a dive to break down this bar’s sound capabilities. I’ll give Sony a pass on that, though, because as we’ll get to in a minute, the HT-G700 creates an experience believable enough that most people may not care anyway.

Outside of its expansive and slightly confusing relationship with audio formats, the HT-G700 doesn’t have a ton of other bells and whistles to speak of. It’s got one HDMI in and one HDMI out port, with the latter supporting both ARC and eARC to streamline sharing data between the bar and your TV. For older TVs, there’s also an optical audio port.

You can connect the soundbar to your TV via Bluetooth as well, though you’ll only get stereo sound with that configuration. Plus, I’d be worried about the noticeable lag between audio and video in that setup and would recommend saving yourself the trouble and sticking with a physical connection.

That Bluetooth 5 technology is best reserved for pairing a mobile device for music playback. Surprisingly, Sony kept this bar fairly limited in audio codec support over Bluetooth, with only AAC and SBC formats to speak of. Notably missing are codecs like aptX or even Sony’s LDAC technology.

You’ll have to live with that, though, since Bluetooth is your best (and essentially only outside of streaming from a TV app) way of easily playing music. When many bars these days are connected entities (the new Sonos Arc is the industry leader in that regard, but even Vizio’s bar has Chromecast capabilities built-in), the HT-G700 is shut off from the world of Wi-Fi, which is a little disappointing. Even with the strides Bluetooth is making in quality, streaming natively from a speaker or soundbar is still the best way to listen, and the fact that Sony doesn’t afford you that option in a $500 bar is disappointing.

If you’re reading this review, you’re probably interested in the HT-G700 mostly for the cinematic experience Sony has touted it for. After all, most everything about this soundbar points to movies first, and all else second.

Here’s a nice upside, though: The HT-G700 is pretty solid for music listening, too. I probably should have expected that, given the pedigree that Sony has when it comes to audio. Still, it is no easy feat to make music sound good when working with smaller drivers packed into the same enclosure.

The HT-G700 not only makes it work, but it does so exceptionally. With every genre I threw at it over a few weeks of testing — from Puddle of Mudd’s She Hates Me, to Eric Church’s Like A Wrecking Ball, with some funkier selections like M.I.A.’s Paper Planes mixed in — the bar maintained impressive clarity and an overall pleasant sound signature.

That sub is a punchy little workhorse, too. It won’t exactly replace the booming authority of a full-size home theater subwoofer, but it did adequately fill out the low end on most tracks I sent its way. You could make the case that it’s a touch too bass-heavy at times, though the bar’s remote does allow you to adjust the sub levels.

On that note, there are tons of easily accessible audio settings available on the remote control. The more invested enthusiast will love this, as it gives them the ability to tinker with every single one of the many options to achieve the preferred listening outcome. It’s way too easy for even me to fall down a rabbit hole of options and preferences. There’s a music preset on the remote itself that for most people would work wonders in terms of jamming out.

When it came time to finally see what the processing abilities in this soundbar could really do, I called up old faithful: That is, I referenced our list of best Dolby Atmos movies, and went to work.

In pops Deadpool, and right away the HT-G700 made an impressive cinematic debut. During the movie’s opening scene, in which the Merc with a Mouth crashed through the roof of an SUV to apprehend some henchman, my poor dog was shaken awake. To him, and to me, the soundbar made us briefly believe the glass-shattering sequence happened right above us.

This was, it should be noted, with the Immersive AE button enabled. As with music before it, there’s plenty of settings to play with regarding movie watching. There’s a Dolby Speaker Virtualizer that Sony’s manual says “enhances the surround and height speaker channels to create an immersive and enveloping virtual surround effect,” as well as a setting to enable DTS Virtual:X.

Other presets include Voice (enhances dialogue range), Night (lowers the dynamics of the sound for late-night watching), and Cinema. For something even more streamlined, there’s an Auto preset that maneuvers between Standard, Music, and Cinema sound depending on the content at hand. It was interesting navigating through these settings and noticing the impacts of the sound, which were sometimes subtle and sometimes less so. But once again, these can be a lot to deal with for the average soundbar buyer, and the standard presets will probably suffice.

Circling back to how the HT-G700 actually sounds for content, here’s my take after hours of movie and TV watching, including everything from Logan to Family Guy and Star Wars: Episode IV — A New Hope: This is a soundbar that will seriously step up your audio experience, but it does have its limits.

As mentioned, the subwoofer provides solid bass, and the center speaker performs admirably to stay on pace with the left and right channels. The processing technology we’ve covered is surprisingly good, meaning it will generally give most listeners the cinematic experience they desire. But compared to a similar product with actual upfiring drivers and rear speakers, the Sony’s limits are laid bare. Virtualization of Dolby Atmos surround sound just doesn’t compare to the real deal, with Vizio’s system showcasing true immersion for the same price.

The Sony HT-G700 is a value for its price, offering great sound for both music and movies while doing so in a minimalist package. While its technology commendably compensates for its lack of true surround sound, it doesn’t totally make up for the components it’s lacking.

For standard audio, I’d probably prefer the HT-G700 to Vizio’s alternatives. But the $500 SB36512-F6, or the slightly more expensive, $700 SB36514-G6 would likely be better Dolby Atmos options on a budget. Still, those feature rear speakers that might not be suitable for certain setups.

The connected, more-music friendly option is the $799 Sonos Arc, which still boasts Dolby Atmos but notably lacks a subwoofer. That’s a $700 add-on, pushing Sonos into the premium purchase range.

Sony has a long history of making quality products and standing by them, and I wouldn’t expect anything different when it comes to the HT-G700.

Yes. There may be a better Dolby Atmos bar out there for the money, but by effectively simulating that sound, the Sony HT-G700 stays competitive with a more compact system.