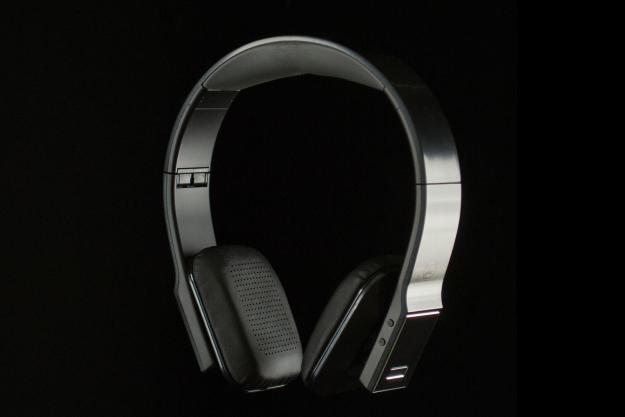 “If all you need are a reasonable-sounding pair of wireless headphones with just a touch of style, you could do a whole lot worse.”

There’s no doubt about it, we’re suckers for wireless audio gear. With all of the technology we carry around these days, cords just feel so 20th century. But until recently, most of the wireless headphones floating around offered more hype than performance, plagued by a combination of streaming hiccups, poor sound, and bewildering premium pricing.

Fortunately, the tide seems to have turned, as we’re starting to see more and more companies break the wired ceiling, including smaller outfits like GoGroove. You may not be familiar with GoGroove (we weren’t) but the company’s latest wireless cans, the BlueVibe DLX, offer two features we didn’t expect: solid wireless performance, and a seriously affordable $80 price tag. We spent some quality time with the BlueVibe DLX to see if they are a wireless headset worth keeping around.

Pulling the BlueVIBE out of their rubbery half-moon case unveiled a superbly light little headset, with sleek angles and a softly glittered finish. In a bid for easier portability, the BlueVIBE’s arms collapse on hinges to fit snugly into their felt-lined case.

Accessories inside the package included a USB to mini-USB charging cable, a tiny setup guide, and an even tinier 3.5mm cable for a hardwired connection. As skimpy as the cable is, however, it didn’t bother us, as these headphones are built to fly unfettered from such bonds, and that’s how we intended to use them.

Though the BlueVIBE are priced to move, you wouldn’t know it from the overall aesthetic. While they don’t match the feel of premium ‘phones, they definitely don’t look ultra-cheap either. The black version we pulled in for review were stylish enough to wear in public with no reservations. The headphones are also available in white.

The BlueVIBE is a superbly light little headset, with sleek angles and a softly glittered finish.

There’s a nice dichotomy of hard angles and smooth curves along the headband and earpieces that establishes a relatively distinct style. The earpieces rotate on both axis for fit, and the leatherette-cloaked on-ear pads offer a silky touch, though we wouldn’t have minded a bit more cushion there. Not so at the top, thankfully, where there’s just enough fluff for a comfy fit. Thanks to that and their lightweight frame of 3.8 ounces, the BlueVIBE are very easy to wear, though their light clamping pressure meant they were prone to slipping when we leaned forward.

The right arm of the headband holds the master control panel. There you’ll find a mini-USB port for charging, a 3.5mm Aux port, a power key on the exterior side, and control keys for volume, play/pause, and song search. All of the keys are set in a fairly intuitive layout, but they were a little sharp to the touch, and volume occasionally didn’t respond without a forceful punch. We also weren’t all that stoked about the loud beep that lets you know you’ve reached max volume, but that seems to be par for the course with an increasing number of wireless headphones.

The power key controls pairing as well, and it’s easy to get things connected. With the ‘phones powered down, holding down the key through the power cycle sets the cans to pair, indicated by a pinpoint LED that flashes red and blue when searching for signal. Once connected to your phone, the light flashes blue (though not obnoxiously so) and turns red when you’re low on juice. Battery life is an impressive 14 hours per charge, though that extended runtime comes with a sacrifice we’ll discuss in a moment.

Sound is provided by the BlueVIBE’s 40mm dynamic drivers, which offer a claimed frequency response of 10Hz-20kHz. Bluetooth connection is accomplished by the aging version 2.1, but the chip used appears to offer a relatively clean signal.

Perhaps the greatest compliment we can give the BlueVIBE is that their grip on wireless connection was nearly flawless. We were able to walk around our apartment at will, with no Bluetooth hiccups, even in through walls into neighboring rooms – feat several pricier wireless headphones have failed to pull off in the past.

However, when in crowded or noisy areas, we found it difficult to hear the music. The BlueVIBE offer little in terms of passive noise isolation, and their maximum volume potential is lower than average. If you’re looking for a commuter headphone that can take you out of your noisy surroundings, you’re better off looking elsewhere.

The BlueVIBE’s sound signature offered a lot of character, though it wasn’t always for the best. The low end was big and full, but like a lot of budget cans we encounter, it was also pretty boom-y, without much precision or tact. That was matched by a very clear, almost wiry midrange, and a rolled off treble region, which took away a lot of excitement and sparkle from the attack of instruments.

When in crowded or noisy areas, we found it difficult to hear the music.

That being said, these little cans handled a wide majority of our music collection with decent balance, and a steady hand. We couldn’t help but smile at tunes like Daft Punk’s “Within,” in which that clear midrange was able to showcase a lot more detail than expected, catching some of the subtleties of the instrumentation. Radiohead’s “Sit Down Stand Up” was also well done. While there were certainly entire dimensions of detail left on the table, we were surprised at how well the cans handled the balance of the synths with the vocals, putting up a clear image, and knocking out the dark buzz synth in the left channel with some gusto.

The ‘phones were also adept at serving up most of our warmer rock and acoustic tracks, from Bob Dylan to Pearl Jam. But they showed their spots when we called up tunes with a lighter touch to instrumentation. Peter Gabriel’s “Big Time,” for instance, was paper-thin in the midrange. The vocals and percussion sounded as though they’d been flattened like a penny in one of those coin machines. And on the flipside, bass got out of hand at times, too. “Royals” by Lorde was just too much, as the low hits seemed to pound and echo like thunder through a canyon, clouding the rest of the track.

Still, the troubling songs were in the minority, and the cans held up relatively well for the large part of our catalog — as long as we didn’t dig too deep into analyzing the sound signature.

GoGroove’s BlueVIBE DLX are far from being a fantastic sounding pair of cans, but they do provide flawless wireless streaming in a tight, comfy little design. They don’t hold up well in a crowd, and more discerning listeners will find the performance short of the mark, but if all you need are a reasonable-sounding pair of wireless headphones with just a touch of style, you could do a whole lot worse.