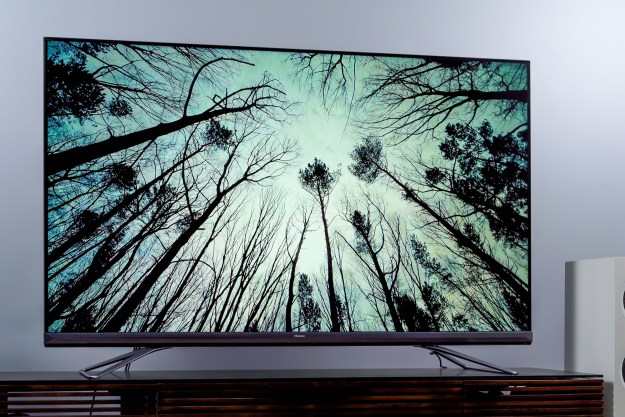 I’ve been eager for Hisense to unleash its dual-cell TV technology on the U.S. market for more than three years. Now that it’s finally here, I find myself more pensive than exuberant.

Let me be clear: The Hisense U9DG is a very impressive TV. I just find myself thinking this particular TV — and, more specifically, the technology behind it — probably has a pretty small audience.

Is it the right TV for you? Let’s find out.

Hisense executes product packaging better than most TV brands. If you’re ordering your TV online and are having it shipped to you, know that Hisense TVs are well packed for the trip and will probably arrive in good condition, no matter how many hits the box appears to have taken on the way.

The U9DG Dual-Cell TV (I’ll explain dual-cell tech in a moment for those unfamiliar) looks similar to other Hisense TVs in that it has trim bezels on the top and side, with a shiny chrome strip along the bottom. The U9DG is slightly different in that its silver strip is much thicker than, say, the U8G or U7G TVs because it houses a forward-facing speaker system. It’s a look you’ll either love or hate. But in the end, the person who needs or wants this TV probably will be willing to put up with the aesthetics regardless.

The U9DG comes with what I’ve come to refer to as “Dumbo ear” feet for stand-mounting. They are large, so they contribute to a large footprint, and can only be mounted in one location under the TV, so those who will be stand-mounting will need to have 56 inches of width and 16.75 inches of depth available on a media stand.

Frankly, wall-mounting this TV seems like the best way to go.

What is dual cell?

Every time I sit down to explain yet another TV display technology, I take a deep breath, roll my eyes, and then quickly remind myself I’m lucky to have this job and just need to get to work. So here’s a quick refresher on two popular TV display technologies, and how dual cell attempts to bridge the gap in a way that is very unconventional and interesting mostly only to display geeks such as myself.

In one corner we have the LED/LCD TV, a tech for which iterations have been around for more than 16 years. Today, this display type involves an array of LEDs acting as backlights. The light from these LEDs shines through a bunch of different layers before emerging from the LCD layer as the colorful image that you see on your TV.

The more zones, the better, because the display has more control over the light and dark areas. And if you can make the LEDs in those zones really tiny, that’s even better — hence the advent of mini-LED backlighting tech.

In the other corner, we have OLED TVs. OLED is a display type that doesn’t rely on LED backlights. Organic Light-Emitting Diode pixels — the same as what you get in many modern phones — are “self-emissive” which means they make their own light when you apply electricity. Conversely, when you take that electricity away, they go dark — no juice, no light, perfect black levels.

To say that LED/LCD TVs have been chasing OLED TVs in the picture quality department would be an understatement. OLED’s perfect blacks make for amazing contrast that the human eye picks up on easily, and perfect black levels are hard to pull off for LED/LCD TVs, try as they may with local dimming zones, mini-LEDs, and such.

How about a new TV tech that bridges the gap and lives somewhere in the middle? That’s dual cell.

Dual cell and how it works

To be clear, dual-cell TVs are LED-backlit TVs. The difference is that instead of dimming and brightening zones of LEDs and making those LEDs tinier, a dual-cell TV inserts a black and white LCD layer into the mix. That black and white layer (technically grey-scale) acts as a backlight control by allowing light to pass through only where it is wanted, down to a pixel-by-pixel level.

Confused? I understand. I’m hoping this cool GIF we made might help.

Now that you have an idea of how it works (there’s really no sense in investigating this TV unless you do) I can tell you that dual cell’s aim is to make a TV that has really good black levels like OLED and really great brightness like LED/LCD, thus bridging the gap between the two. Perhaps now you can understand why I was excited about this new tech.

So, does it work?

Yes, dual cell works, just not as well as I want it to. Also, I’m not being fair.

Yes, dual cell works, just not as well as I want it to. Also, I’m not being fair.

If dual-cell display tech worked as well as I wanted it to, then it would be the perfect balance between OLED and LED/LCD TV picture quality, and I could go home, dust my hands of this whole TV review thing, point to dual-cell TVs and simply say, “buy that.”

Fortunately for me, the Hisense U9DG isn’t at that level of perfection, so my job is safe … for now.

Unfortunately for Hisense, I think this means that reviews of the U9DG will probably be an awkward mix of qualifying statements and bungled-up details that may go over a lot of folks’ heads. So, with that in mind, I’m going to break the U9DG down as simply as I can.

From a performance perspective, the U9DG offers a very specific compromise in picture quality that isn’t matched by any other TV currently on the market. This narrows the U9DG’s appeal to a fairly small audience, which is fine, but then we must inexorably arrive at the U9DG’s price — $3,500 MSRP for a 75-inch TV — which makes it a hard sell to an already small audience.

To put things in perspective, you can purchase a 77-inch LG C1 OLED for roughly the same price as the 75-inch UN9DG. And considering the U9DG is aimed at the kind of enthusiast that is already considering the LG C1 OLED as an option, I see more people deciding in favor of the LG OLED. Those worried about burn-in might gravitate toward the U9DG but, again, I see this as a relatively small subset of people.

Another issue that is tempering my enthusiasm for the Hisense U9DG is, believe it or not, another Hisense TV. I’m so impressed with the Hisense U7G’s picture quality and the value it represents that my viewpoint is somewhat skewed. It’s hard to pivot from enthusiastically pointing folks toward the U7G as one of the best TVs you can get under $1,000 (if not the best) to trying to explain the U9DG and its appeal, albeit at a much higher price.

As always, I tested the Hisense U9DG using a Spectracal C6 meter profiled to an xRite i1 Pro meter along with Calman Ultimate software to provide some objective numbers to balance out my subjective observations.

What I found was that my perception that the U9DG wasn’t an especially bright TV was correct.

In the “Theater Day” picture preset I measured about 550 nits peak in Standard Dynamic Range (10% window) with the backlight setting at 80, and 680 with the backlight maxed out at 100. That’s brighter than SDR needs to be for most folks and will work fine in a room with a fair amount of ambient light.

For High Dynamic Range, the highest number I saw was right around 1,000 nits. Again, these are test patterns, not real content, but I don’t get the feeling this TV punches much above 1,000 nits for HDR highlights.

This TV is really leaning on its black levels to sell it.

For perspective, the Hisense U7G measured about the same, and the Hisense U8G measured almost 2,000 nits (nearly double) in HDR — although, to be fair, I got much higher brightness readings than other reviewers did, and those specs exceeded Hisense’s promises.

Anyway, even if you don’t know your nits from your nuts — I’m partial to the Oregon hazelnut, personally — we can see that the U9DG is measuring about the same in terms of brightness as the U7G which costs half as much at the 75-inch size. So this TV is really leaning on its black levels to sell it.

And since we’re talking about black levels now, I have to bring up the LG C1 OLED and its perfect black levels. It’s a TV that sells for about the same amount of money as the U9DG, but which comes up short of the U9DG’s peak brightness for HDR by about 250 nits.

All that other stuff

I didn’t spend a lot of time talking about the U9DG’s sound quality, voice search capabilities, Android TV platform, or other considerations because they are very similar in most ways to other Hisense TVs on the market. The sound system is more advanced, but not spectacularly impressive, so I’d suggest a soundbar for audio quality that holds up to the excellent picture quality of the television.

A TV before its time

I think the U9DG falls into a category of television that is simply before its time. It’s hard to be a pioneer, and I think that Hisense is seeing that with its bold introduction of a dual-cell TV into the U.S. market. I think that Hisense will continue to improve on its dual-cell technology, and I can see other brands picking up on dual-cell and offering a little competition. Perhaps dual cell will end up being the next big thing in TV tech. Or perhaps its application will remain a bit too niche to hit critical mass and take hold.

Regardless, I applaud Hisense for taking the risk. I look forward to seeing what the brand can do with dual-cell technology, and I am curious to find out if this will make Hisense a trend-setter in the U.S. TV market.

The Hisense U9DG Dual-Cell TV is a marvel of engineering with better black levels than nearly any other LED/LCD TV on the market and better brightness than nearly an OLED TV on the market. — I would categorize the picture quality as very good. However, the U9DG’s black levels aren’t as good as comparably priced OLED TVs nor is its brightness as powerful as comparably priced LED/LCD TVs, thus making the Hisense appealing to a very small audience.

For most folks, the answer is no. The U9DG serves a very specific audience with very specific desires. Most folks will either want a brighter TV or a TV with absolutely perfect black levels.

For better black levels and more advanced gaming capabilities, a 77-inch LG C1 TV is a better alternative at a similar price. For a much brighter TV with solid black levels, the Samsung QN90A is a better pick at a slightly lower price.

It is difficult to predict how long the U9DG will last in terms of relevancy since I anticipate Hisense will either improve on the tech or abandon it entirely — at least in the U.S. market. In terms of its long-term reliability, I feel Hisense TVs have a solid performance track record extending to about 3 years and time will tell if that number goes higher.

Hisense provides one-year limited parts and labor warranty. I consider this more important than usual given dual-cell tech is largely unproven in the U.S. market.