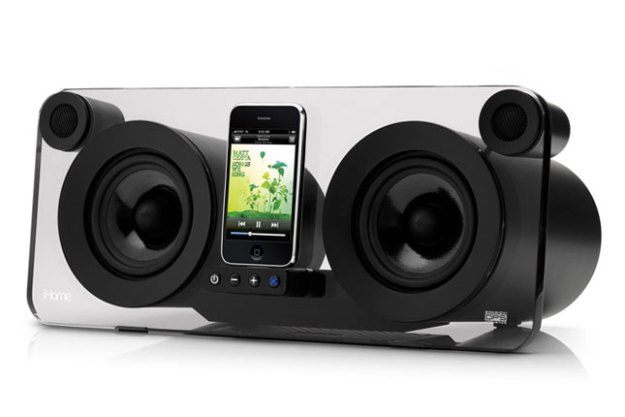 “IHome’s iP1 makes an impression with bold style and even bolder sound, but lacks the nuance and control expected from a high-end iPod dock.”

If the iHome brand seems familiar, it’s probably because you’ve seen or heard their products at your favorite large-scale retailer. In 2005 iHome began making affordable clock radios for the iPod and since then has expanded their product line to include a dizzying array of portable speakers, home stereo systems, earbuds and even more clock radios. iHome, though very successful and popular, is not what we’d characterize as a “high end” brand, but with the introduction of the iP1, the company aims to change that perception.

Decked out with powerful digital amplifiers, individually enclosed speakers and a proprietary DSP chip that promises to improve sound by “adding back what the MP3 took away” the iHome iP1 certainly looks and reads like a high-end iPod speaker dock. In this review, we’ll put the iP1 through its paces and see if its sound measures up to the all of the company’s hype.

The first thing we noticed about the iP1 was its weight. At a little over 8 lbs, the iP1 is one of the heavier iPod speaker systems we’ve tested and certainly on par with the weight of many of the high-end brands we’ve seen. But as soon as we removed the iP1 from its box, our attention was stolen by the iP1’s striking appearance. The iP1 doesn’t have a cabinet or case, per se. Instead, each speaker is backed by a cylindrical enclosure and mounted into a ½” thick slab of smoked Plexiglas.

Included with the iP1 is a power adapter stout enough to run your laptop (which we do not recommend trying, by the way), an ultra-thin remote control and an extra pair of grill-less speaker bezels that allow the user to show off the slick looking 4” speakers.

If iHome’s design intention was to get the iP1 to stand out in a crowd, then they’ve succeeded in a big way. The individually cased speakers mounted into clear plastic forces one in for a better look.

High frequencies are taken care of by two individually enclosed 1” silk dome tweeters driven by a 20 watt digital amp. The midrange and bass frequencies are produced by two 4”, fiberglass woofers with very high-end looking phase plugs that protrude from the center of the driver. The 4” speakers are driven by a separate amplifier that delivers 80 watts of digital power; (In case you’ve lost count, that 100 watts is pretty impressive for an iPod speaker dock.) Each 4” driver is backed by a ported cylinder enclosure for enhanced bass output.

On the back of the unit we found the iP1’s power jack, a 1/8” line input for use with other audio devices and a component video output to send video off to your TV, if you like.

iHome makes a big deal out of the Bongiovi DSP chip buried under the hood of the iP1. According to the product literature, the Bongiovi chip is a complex algorithm that reprocesses your audio and “replaces” sounds lost in the compression process while also boosting bass. All you need to do is “press the button” and your sound is transformed.

The iP1 loses a few points for missing some convenience features. You won’t find a clock on this unit nor is there any carrying handle to be found.

Since the iP1 appears to use some quality drivers in pretty tight enclosures, we went ahead and gave the unit some break-in time. Most high-end speaker manufacturers recommend breaking a speaker in for around 40 hours before doing any critical listening, so we gave the iP1 about 50 hours and then sat down to have a listen.

The first track we played was Jamie Cullum’s “Frontin’” from his album: Twentysomething. This track has a good amount of acoustic bass, some well recorded piano, brushes on drums and of course Jamie’s signature vocals.

Like its appearance, the iP1’s sound makes quite a statement. Bass was very big and the high frequencies sharply pronounced. Since it sounded as if it could use some tonal adjustment, we played around with the bass and treble controls. Ultimately, we were able to tame the iP1 down a little bit, but not as much as we would have liked. We were surprised to learn that we had turned both the bass and treble controls down as far as they would go.

Thinking that our uncompressed Jamie Cullum track might be a bit bright for the iP1’s liking, we switched gears and listened to a 128k MP3 of Jamiroquai’s “Virtual Insanity” that had been imported into iTunes and converted to AAC format. The resulting sound was considerably less brazen but not really what we were aiming for. Restoring the tone controls to the factory defaults definitely perked up the sound, but it was clear we were listening to a highly compressed track. Since the Bongiovi DSP process promises to make compressed music sound better, we decided to turn it on and see how it did.

We “ pressed the B button” and were almost blown out of the room by the shift in volume, bass and treble output. Not only was the bass boosted considerably, but the volume leapt up enough for the sound to be uncomfortably loud. Though iHome claims that the Bongiovi chip is constantly analyzing and adjusting the sound by adding back missing sounds, it comes off more like an extremely effective “loudness” button. Both bass and treble are boosted, as is the overall volume.

The iP1 is capable of playing very loud. It would no doubt do a great job of cutting over the din of a big party. It has a sound much larger than its size would infer and can produce some serious bass. Unfortunately there seems to be a lack of control to the sound that becomes a liability as eclectic music selections are played back. Those tracks with already big bass tended to sound bloated and overly resonant. Tracks with lots of high frequencies were very aggressive; at times the tweeters would break up and start sounding thin and metallic. The midrange quality of the iP1 is the one part of this unit that seemed consistent. Though clear and articulate, vocals were often overshadowed by bass and treble from accompanying instruments.

It may seem like we’re being a little tough on the iP1. To be fair, the iP1 does sound much bigger and better than 95% of what you’ll find at most mega-stores. However, its $299.00 asking price, solid build quality and eye-catching style raised our expectations for the sound quality to match those at a similar price point.

iHome’s iP1 attempts to bring studio quality sound to your home by packing high quality speakers, powerful amplifiers and proprietary signal processing into a very hip, modern looking iPod speaker package. Though very robust and powerful, we found that the iP1’s sound was a little aggressive and, at times, distracting. We recommend you take a listen to one before deciding if it is right for you.