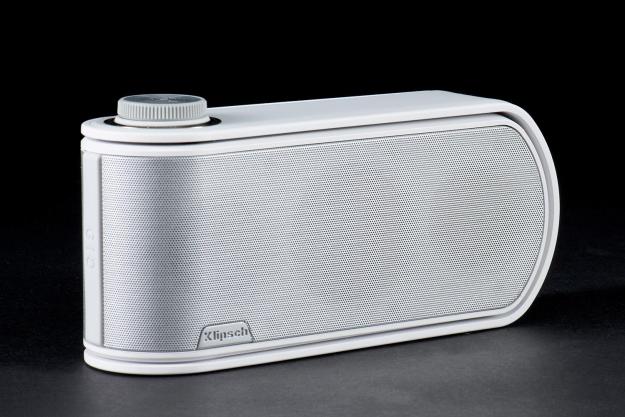 “With full, powerful sound, good stereo separation, and some impressive dynamic expression, Klipsch’s new Gig has a lot going for it.”

After holding out longer than many of its peers, hi-fi audio company, Klipsch, finally entered the Bluetooth party last spring, starting with its KMC 3 wireless speaker. The flagship of a full lineup of speakers in the Klipsch Music Center series, we enjoyed the KMC 3 for its big, powerful bass, and smooth upper register.

Now the company is back with the junior model of the series, the fully portable Klipsch Gig. Designed to get in the ring with other top-tier portables like the Bose SoundLink Mini, the $200 Gig boasts a four pack of drivers, minimalist controls, and a removable swing-arm band that serves as both a stand and a guard for the speaker. We recently got our hands on a Gig to see if it served up that famous Klipsch sound. Read on for the results.

Pulling the Gig from its package revealed a smooth, oval speaker, with dual metal grills at the front and back, and rubberized padding over a protective arm. Swinging the guard away from the speaker revealed a single power switch on the right side along with a mini-USB port and a 3.5mm Aux input. The only other control to grace the Gig’s matte-plastic frame was an old school volume dial on the top left, vaguely reminiscent of what you’d find on a vintage radio.

Inside the box was an ample collection of accessories, including three regional DC power plugs, a USB to mini-USB charging cable, a 3.5mm Aux cable, and two soft travel bags to tote each the speaker and its accessories along on your travels.

In a market flush with mirror-image portable speaker designs, Klipsch’s Gig brings just enough originality to stand out from the crowd. The protective arm/stand that swings forward and back along the left axis gives the speaker a distinct look and allows it to stand both horizontally and vertically, though the former will offer your only chance at any stereo separation.

Speakers with this kind of full low end and expressiveness simply didn’t exist a short time ago.

The fully detachable arm is clever, but it moves a little awkwardly, and when we messed with it too long, it tended to pop out from the bottom easily, detaching from its metal axis point at the bottom of the speaker. The arm is designed to be interchangeable and comes in a host of available color options to allow users to change-up the style. It’s a cool idea, but for us, its jerky motion detracted from the quality of the speaker a tad, so we ended up removing it for most cases.

At the right side of the capsule rests a cavity that bears the power/pair switch, and the speaker’s input ports. Flipping the switch up powers the unit on, sending out a pleasant guitar chord chime. A small set of visual instructions directed us to hold the switch up for pairing, which evoked a slow blink of a blue LED on the volume dial at the top of the device. We liked the minimalism of the controls, but again found ourselves a little underwhelmed by the practical design, ending up turning the speaker off while holding the switch instead of setting it to pair a few times.

The dial at the top of the speaker adjusts volume, and a button built into the center cap also controls play/pause, song search, and call termination. Aside from the small Bluetooth LED at the center of the dial, there are also three green LED dashes that indicate battery power. The lithium-ion battery has a 12-hour maximum battery life per charge, claiming 4 hours at peak volume.

Packed into the Gig’s thin frame are two pairs of drivers, including dual 1-inch active drivers at the sides, and a 2-inch passive radiator at both the front and back faces. The speaker has a claimed frequency range of 77Hz-20kHz, which is pretty respectable for a speaker the Gig’s size; those passive radiators get put to good use, aided by Klipsch’s proprietary DSP.

Other features for the speaker include an on-board microphone, NFC pairing, and the aptX codec for CD-quality audio streaming from compatible devices.

Throughout our evaluation, the Gig displayed a solid and clear Bluetooth connection with virtually no dropouts, even when moving away from line-of-site throughout our apartment and offices. That alone gives Klipsch’s first go at a small portable a leg up on many of the speakers we’ve tested.

However, unlike most of its competitors, the Gig didn’t auto-connect to previously paired devices upon power-up in our test runs. This isn’t necessarily a bad thing, but it did make for a more arduous start-up by requiring that we pull the speaker up in our smartphone’s settings with every power up. And a few times our iPhone 5 couldn’t lock in with the speaker and had to be repaired altogether. In those moments, we again wished for a simple pair button that we could tap, instead of holding up the power switch for 3 seconds.

Before we even get into the Gig’s audio performance, we have to say that portable wireless speakers with this kind of full low end and expressiveness simply didn’t exist a short time ago. As it is, the Gig has some real competition in the big, hi-fi sound category, including the aforementioned Bose SoundLink Mini, and cheaper speakers like the JBL Charge, and the UE Mini Boom, both of which offer a serious punch of sound for as little as half the price of Klipsch and Bose’s offerings.

The Gig didn’t auto-connect to previously paired devices upon power-up in our test runs.

That said, we enjoyed the sound of this little guy. The bass and lower midrange were thick and bawdy, offering that warm pump that helps avoid the tinny, miniaturized sound of so many portables we hear. The speaker also provided some pleasant dynamic expression in the upper register, and a wider stereo image than you’d expect from a speaker that only spans 7 inches across.

The Gig did a good job both with rock tracks and on 70’s pop tunes from the likes of Elton John and James Taylor. The instruments were balanced and well spread out, even showing some dimension in the background layers. And the percussion was thick and resonant, especially impressive on tom rolls and bigger kick drum hits. There were occasional moments of very light distortion when we pushed the speaker on heavier rock tracks, but nothing out of hand.

Hip-hop tracks also benefitted from the speaker’s big low end, which was firm and more controlled than what we heard from the Bose SoundLink Mini. Snoop Dog’s “Serial Killa” was an awesome ride, with a pounding, low-slung groove, and clean snare and cymbals. However, while the bass was better controlled, it wasn’t as powerful as the SoundLink Mini. Also, the speaker didn’t quite reach the level of clarity or detail in the upper registers that we expected from a Klipsch product.

The textures of instruments, especially in the middle of the sound, were a bit buffed over, and in more complex productions, the lighter subtleties of the effects and melodic counter melodies often got a lost in the crowd. The undercurrent of the synth effect that shimmers throughout Radiohead’s “Codex,” for instance, was a little dusty and unclear, and the intricate phase shifts in the deeper layers tended to bubble up and then totally disappear into the background. Worse, the nuanced synth effects in Depeche Mode’s “Policy of Truth” were simply MIA.

With full, powerful sound, good stereo separation, and some impressive dynamic expression, Klipsch’s new Gig has a lot going for it. However, the audio-nut in us wished for more clarity and detail at times, especially with more intricate selections in which many sounds simply didn’t make the final cut. We also weren’t crazy about the control set and pairing setup, which made us work a little harder than we want to with a portable. Still, the Gig marks a worthy entry in the big sound/small size Bluetooth speaker category, and is definitely worth a look.