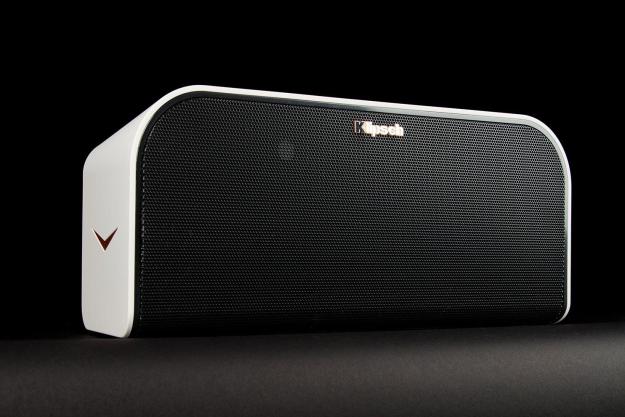 “Klipsch has brought the boombox back with the perfect blend of style and sonic punch.”

While the glut of wireless speakers available today can make for some difficult choices, it also makes for some seriously excellent engineering. After all, if you’re going to put out a speaker in this market, it had better kick some ass or it’s going home early. One thing that can make the buying decision a little easier is when big names get involved. And when someone with a name like, say, Klipsch puts out a wireless speaker, you can bet we’re interested.

If you like your bass, you’ll love this speaker.

Klipsch’s newest device is the KMC 3 Wireless Music Center (available at $400.) Named after the Klipsch Music Center Series of concerts, the KMC 3 is designed to create a performance reminiscent of live music. As such, it’s served up with some enticing tools like aptX encoding, an internal subwoofer, and 130 watts of peak power, promising “powerful, full bandwidth sound” in a sleek little package. And if you’ve got 8 D-cell batteries lying around, you can even take it on the road. So how does Klipsch’s latest contribution to the field actually sound? Let’s find out.

The KMC 3 comes in its own hard carrying case constructed from heavy-duty cardboard with a magnetically secured flap at the front, and a handle on top for easy travel. We like the idea, but the case did tend to pop open easily when we brought the speaker home, forcing us to guard the door against our body.

Pulling the speaker from its case reveals an alabaster box, with a smooth matte finish and gently rounded edges. A deep black grill covers the front face and a matching black rubber pad runs along the top panel, just under a slim handle. Fiery gold accents flank the sides and the logo at the front, giving the speaker a regal bearing. Along with our ghost-white review unit, the KMC 3 also comes in all black.

Digging through the box we found a slim packet of instructions, a power adapter and IEC cable, and a miniature, gloss-black remote. We were a tad surprised to find no 3.5mm auxiliary cable included, and not at all surprised to find zero D-cell batteries.

Maybe it’s simply the KMC 3’s concert series namesake, but the speaker’s wedged design, and three-sided border at the front looks distinctly like a concert bandshell. The frame seems to jump out at you a bit, enhancing its aura of a powerful sonic device.

The unit is very mobile for its size, thanks to its convenient handle at the top, making it easy to move around the room at your convenience. A slim set of touch capacitive controls rests along the top panel, including a power button, a volume control, and a Bluetooth button, which is for some reason designated by an infinity symbol. The buttons light up with brilliant red and blue LEDs upon power-up, with a Knight Rider-style laser slit to display volume level.

At the back of the speaker are two small sound ports as well as the system’s inputs, including an AC power input, a USB port for charging a smartphone or other device, and a 3.5mm Aux input. At the bottom are 4 small rubber pads, and a large plate adorned with flat screw-caps to access the battery compartment. The KMC 3 is estimated to run an impressive 26 hours at default volume and 8 hours at full volume once equipped with the 8-pack of batteries necessary to power it.

…requiring D-cell batteries as opposed to supplying an onboard rechargeable battery is pretty 1995.

We’ve been hinting at this, but we have to say outright that requiring D-cell batteries as opposed to supplying an onboard rechargeable battery is pretty 1995. We appreciate the mobile option, but we can’t imagine using the batteries more than a few times. That said, the price of the unit puts it on par with many similar wireless devices we’ve tested that are totally homebound, so kudos are still in order, reluctant though they may be.

Getting to more impressive features, checking under the hood reveals a set of 2-inch aluminum diaphragm drivers, and a 5.25-inch subwoofer, molded into the bass-reflex enclosure. The sub crossover point is rather high, at 380Hz, with a total system frequency range at an expansive 45Hz-24Khz – that’s a good 4KHz above the range of human hearing. As mentioned above, the system reaches a peak power of a hefty 130 watts. The drivers are digitally bi-amped, and run through Klipsch’s proprietary DSP. Wireless transmission is accomplished via Bluetooth equipped with the aptX codec for CD-quality audio.

The tiny remote looks snazzy, and allows for full control including volume, song search, mute, and power. We noticed some moments of delay on the remote, however, and had better luck using our phone or Macbook for control.

The KMC 3 played all of 4 notes before it was apparent that this little beauty packs some serious punch in the low end. Rich, lush, beautiful bass rushed forth from the speaker with musical lyricism to accompany its rumbling force. At times the massive low end overpowered the rest of the frequency spectrum, but when it did, it did so with style. If you like your bass, you’ll love this speaker.

As we began exploring a vast expanse of musical genres, the KMC 3 slowly opened up, revealing a deep palette of colors. The overall tone of the midrange and bass was decidedly dark, displayed with almost tube-saturated warmth, likely stemming from the extended range of the subwoofer. On the other side of the coin, the treble was spun from the small aluminum drivers with crystalline precision, bleeding into the darkness below to create an engaging, dichotomous blend.

The KMC 3 played all of 4 notes before it was apparent that this little beauty packs some serious punch in the low end.

A glowing example of the KMC 3’s diverse mixture came when we auditioned a few tracks by Mr. Stevie Wonder. “Love Having You Around” entered with thick fuzz in the bass and rich, reedy clavinets, while the vocal had a husky, amber color. In contrast, the shimmering cymbals and snare seemed to dance along the top in cool, effervescent accents. While the low end was a bit out of balance with the bright treble on this particular track, we still really dug what the KMC 3 did with it, and needed to hear a bit more.

We next cued up “Big Brother”, and “Blame it on the Sun”, the latter of which really showed some impressive versatility. Sound leapt from the cabinet, revealing a multiplex of instruments in a wide stereo field. The vocals were cleaner and more present here, and the more the music grew in complexity, the more the system seemed to open up and expand, flowing forth in a brilliant wash of acoustic guitar, horns, keys, and percussion that made us want to hold on beyond the last chord.

As we turned to other genres, the lighter side of the KMC 3 began to shine a bit more brightly. The speaker rendered some of our favorite acoustic tracks with articulate precision, and woody resonance. Chris Teeley’s mandolin solo on Nickel Creek’s “Ode To A Butterfly” was vibrant and tight, as the speaker followed his supernatural arpeggios with tactile accuracy.

Aside from an occasional sonic imbalance, the only real glitch we encountered was kind of hilarious. When we put on the ultra-heavy grooves of Too Short’s “Just Another Day”, the speaker offered no distortion or rattle, but a strange high pitch rang in rhythm with the main groove. Approaching the back of the speaker, we found the source: air velocity through the bass ports was so high, they were whistling. The issue could likely be fixed by adding some felt around the ports, and only came about under serious bass duress, but we thought it was worth mentioning.

With a swath of rich, musical bass, a crystal clear upper register, and reams of distortionless power, the Klipsch KMC 3 provides a pleasant one-two punch of brawny force and pristine accuracy. At times the girthy lower register and dark midrange were out of balance with the shimmering treble above, but there were plenty of gorgeous sonic moments to be enjoyed with this little box.

Klipsch has brought the boombox back with the perfect blend of style and sonic punch.

It may be a little bottom heavy, but there’s no doubt this speaker can really rock a party.