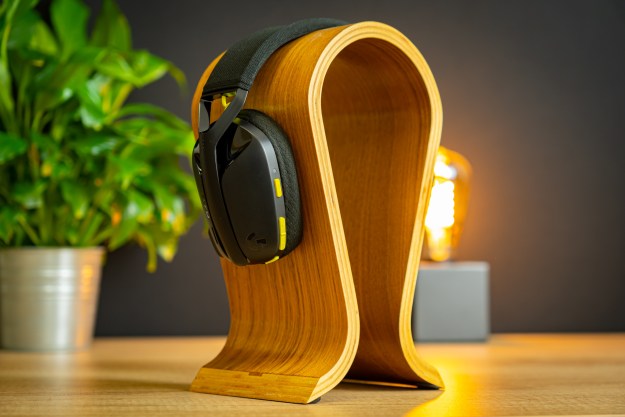 “The Logitech G435 is a wireless gaming headset that sacrifices too much to hit its attractive price.”

When looking for the best gaming headset, it’s easy to fall into the trap of wanting wireless connectivity. Having one less cable really tidies up a workspace, and it’s nice to be able to get up without needing to take the headset off.

But the feature tends to add a significant amount to the price tag due to the need for a wireless radio, electronics, and battery. That’s not  the case with the Logitech G435 Lightspeed, however. You won’t find a cheaper wireless gaming headset — at least not one from a well-known brand.

Unfortunately, the G435 cuts too many corners to hit that price point, leaving you with a headset that doesn’t feel like it’s worth $80.

Starting with the design, the first thing that stands out about the G435 is that it’s extremely light. It weighs just 165 grams, which is absolutely nothing as far as headsets go, especially wireless ones. For comparison, Razer’s Barracuda X weighs in at 250 grams, which is considered light, and something high-end like Corsair’s Virtuoso RGB Wireless XT weighs 382 grams. It’s even lighter than the 240-gram Logitech G335.

So, yes, the G435 is indeed very light. But build quality is a concern with a headset this light. There’s no getting around it: The G435 feels flimsy and cheap. The plastic parts are all thin, there are no nice materials, and the headband, although it looks full, it’s just a plastic frame with a fabric cover.

I feel like if I held the headband in my fist, it would be one strong squeeze away from snapping. That’s not good. Logitech is marketing the light weight purely as a benefit, but it feels like it was a decision made to cut costs, and it shows. The heavier Logitech G533 looks and feels more premium, and can be picked up on a discount for less than the newer G435.

I can’t deny the advantages of an ultralight headset, however. The G435’s light weight and soft cloth earcups make it one of the most comfortable headsets I’ve had the pleasure of wearing. It’s surprisingly pleasant resting on the neck, too.

The earcups don’t swivel to lay flat on your chest, but because there is no protruding microphone, and because it’s surprisingly small, your chin doesn’t collide into it as much while turning your head.

When it comes to features, it’s no surprise that the G435 isn’t highly kitted out. That doesn’t mean it’s shabby, though. The headset supports various spatial audio codecs including Dolby Atmos, has an optional volume limit of 85 decibels to protect your ears, and the dual beamforming mics work together to reduce background noise.

And yes, that means the G435 doesn’t have a boom mic, a regular feature in gaming headsets. Boom mics provide that tighter, clearer audio quality compared to the smartphone-level quality that beamforming mics provide. It’s a surprise to see Logitech leave it out here, as even the the G335 includes one.

Charging the G435 happens via the USB-C port, and a full battery is rated for 18 hours of life. Controls are equally simple: There is an on/off button, volume controls, and a mic/mute button.

The primary method of connectivity for the G435 is over the included 2.4GHz Lightspeed dongle, but you can also use it with Bluetooth devices in a low-latency mode – this combo makes it usable with not only PC, but also PlayStation devices and mobile phones.

That’s pretty sweet if you consider that the vast majority of gaming headsets won’t do Bluetooth, and you’ll often have to jump up to something like the SteelSeries Actis 9, which costs a hefty $200.

Of course, the headset’s real test comes down to sound quality. The G435 still comes packed with 40mm drivers, which sounds promising, but in practice, I wouldn’t expect acoustic miracles from the G435. There is plenty of bass and some detail at the top, but the headset is a bit lacking in the midsection – I would describe the sound profile as hollow.

There’s a lack of “fullness” to the sound that makes you crank the volume up to get the desired satisfaction. In that way, it’s a good thing it comes with a volume limiter.

But then again, this is an $80 wireless headset. Great sound quality was never the primary goal, and the acoustics are good enough for casual play. If you’re a competitive gamer, though, you may want to look for something a bit more revealing in terms of sound so that you don’t miss your opponents’ footsteps when they sneak up to you.

The Logitech G435 Lightspeed has a few things going for it, such as its light weight, comfort, and Bluetooth support. However, unless you absolutely need a wireless headset for under $80, I would stay away from it and spend the same budget on a wired pair.

Due to the need to squeeze a wireless radio, control module, and battery into the slim budget, Logitech has had to make concessions to the build and sound quality. They take too much away from the overall experience, and even though it’s wireless, the G435 does not feel like a set of $80 headphones.

The closest alternative is Razer’s recently launched Barracuda X gaming headset, which costs $20 more. Although it doesn’t support Bluetooth, it offers better build and sound quality, as well as a proper microphone, and it looks more appropriate for outside the home. It’s more expensive but well worth the added expense.

The Logitech G533 is also a good choice. Despite having originally sold for $150, you can currently pick it up at retailers for as low as $74.

If shopping wired at the same budget, the entry-level HyperX Cloud II headset offers much better build and sound quality.

Although with delicate care the G435 should last two to three years, its fragile build is one accident or rage quit away from snapping.

If you really need a headset for $80, don’t buy a wireless headset. Too much of the budget is going to the wireless radio, electronics, and battery, and at this budget, you’re better off buying a headset that has a cable.