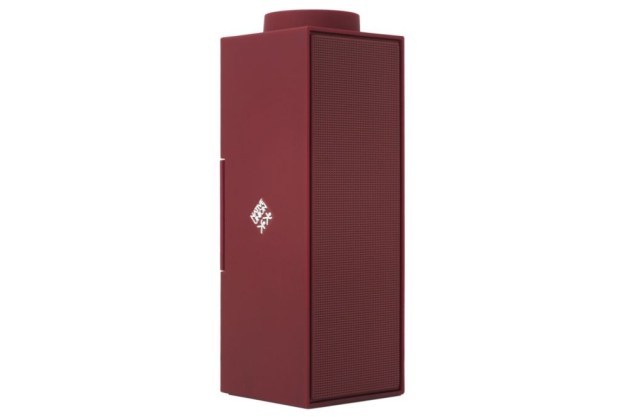 “We think there is a lot to enjoy about the Switch’s sound quality, but its dependence on a wired connection defeats its purpose.”

Let’s be real: the Bluetooth speaker industry is getting out of hand. We’ve seen so many portable speakers with similar designs and features lately, we’re reminded of the Malvina Reynolds song featured at the intro of the Showtime series Weeds: “…little boxes on the hillside…and they’re all made out of ticky-tacky, and they all look just the same.” With all those “little boxes” out there, the choices begin to blend together into an anonymous blur.

Native Union hopes its take on the “little box,” the Switch, will be different enough to turn some heads on the Bluetooth battlefield. Named for its ease of use in both vertical and horizontal orientations, the Switch is available in a variety of eye-catching colors, and has a distinguishing volume dial on the side/top, giving it a unique flair.

But in a market littered with competition, it takes more to survive than just a clever design. In our recent Bluetooth speaker round-up, we discovered an impressive combination of sound quality and features from our five competitors, all of which were within shouting distance of the $100 price range. At $150, the Switch is another entry-level contender vying to become your go-to portable jukebox. We recently sat down with the speaker to see how it stacks-up in the ever growing Bluetooth sprawl. Here’s what we found.

The Switch comes tightly framed in a succinct cardboard package, showcased behind a large cellophane window. Popping the hinged cover open we removed the rubberized block to reveal a packet of instructions, and a small USB to mini-USB nylon charging cable. The box and cable were both color coordinated to our test model which boasted a “maybe-it’s-Maybelline” red exterior, which Native Union calls Bordeaux.

The Switch is fairly hefty compared to most of its rivals, and feels substantial in construction and weight as a result. The speaker’s rubberized exterior encases all sides of the box except the metal speaker screen, providing an easy grip when jostling the unit around. On the top face, a Native Union logo is etched in white lettering.

The easy-turn volume dial on the Switch’s right side serves as the unit’s control center. The dial is digital, and the speaker gives a chime when it has reached full volume. In the center of the dial is a multi-function button which handles commands such as power, pairing, play/pause, and basic calling functions. Beneath the dial is a white LED, which turns red while charging. On the left side, a small dimpled button reveals battery life when pressed, indicated by a 5 point LED strip.

Tucked beneath the Switch’s front screen are the unit’s 2 small drivers, accompanied by an active subwoofer — a rare find in the entry level portable market. On the back of the device is a small rubberized flap which opens to reveal an assortment of ports, including a mini-USB power input, a USB power output, a 3.5mm aux input, and 3.5mm speaker/mic line out.

The Switch boasts a broad selection of features on par with its top competitors, including a 14-hour battery run-time (with 180-hour standby), smartphone charging, and a full-duplex speakerphone with conference call capability which allows both parties to speak and be heard at once. Using the speakerphone function for calling is fairly convenient, though we found voices came through a bit cloudy on our end.

The speaker pairs easily by holding down the power button while it’s turned off. A rather pleasant sequence of futuristic chimes lets you know it’s on, and another short chirp indicates the speaker is in pair mode, after which it becomes available as “Switch” on your Bluetooth-enabled device.

We were disappointed to find that the Switch runs the 6 year-old Bluetooth version 2.1. Though many entry level speakers still use the old protocol, at $150 we hoped the Switch would follow the lead of speakers like the Braven 600 and step up to version 3.0. As we have discovered, the difference in sound quality can be pretty dramatic, depending on how well Bluetooth is employed.

We tested the Switch with a wide variety of musical genres from our catalog with our iPhone 5, both via the Bluetooth connection, and wired directly into the 3.5mm aux input. What we discovered serves as a cautionary tale for all audio companies (especially start-ups just cutting their teeth) about the perils of a poor wireless connection for a device that will live and die by its wireless capabilities — or lack thereof.

Sonically, the Switch has some great things going for it. When hard-wired to devices, the Switch puts out an impressive sound signature through its small trio of drivers, displaying full tones, and a surprisingly wide sonic image. Though it wasn’t quite as loud as some entry-level speakers we’ve auditioned (namely the Flip by JBL), the Switch exhibits a powerful expanse of the frequency spectrum for its size.

The Switch’s tweeters are a bit bright for our taste, adding a lot of sizzle to high percussion like crash cymbals and hi-hats. However, along with that extra bite comes an ample display of clarity and precision in the treble and midrange. The Switch’s active “sub” counters the sharp top end with impressive body in the low midrange and bass, combining for a very full sound. Toms, kick drums, and snare had a solid foundation of depth that outshined many competing entry level speakers we’ve tested.

However, the Switch’s sonic qualities were totally usurped when we switched over to Bluetooth – not a good thing, considering the devices intended use. If you love plate reverb, the Switch might be right up your alley. An aluminum-sheen of reflection was layered over every song we played while connected via Bluetooth. Vocals were sunken and muddy, pushed behind the instrumentation. And a phase-y distortion of muddled tones replaced the articulate clarity we’d heard while hardwired, making more dryly recorded songs like “English Girls” by Ryan Adams congested with artificial echo.

Though we like the Switch’s unique design and wide feature set, the speaker seems to be an example of what happens when good engineering goes wrong. A Bluetooth speaker that does Bluetooth poorly is, by its own definition, obsolete. We think there is a lot to enjoy about the Switch’s sound quality, but its dependence on a wired connection defeats its purpose. Unless you like your wireless speakers wired, we suggest you look to the myriad of alternate options for your Bluetooth speaker solution. Check out our aforementioned Bluetooth speaker round-up as a starting point.