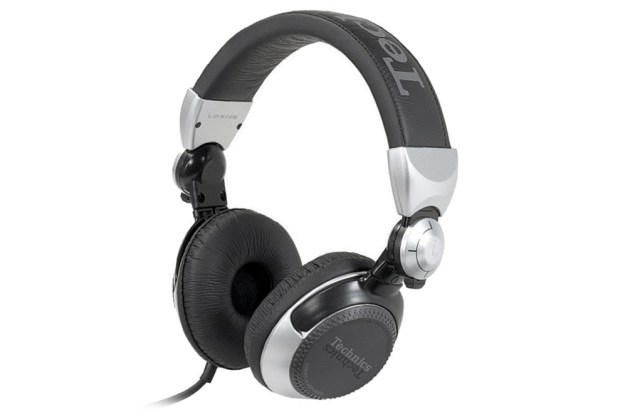 The Technics SL-1200 turntable, a staple in many DJ booths since its inception, turns 40 this year. To celebrate the birthday of this now-ancient (in tech terms) icon in the world of record spinners everywhere, Panasonic-owned Technics has unveiled two new sets of Pro DJ headphones: the RP-DH1250 and the RP-DJ1205. We had a chance to review the larger, glitzier, and higher-priced of the two, the DH1250 earlier. We really enjoyed their soundscape and features and recommend you check them out. We have now returned for a look at the DH1250’s more conservatively styled, younger brother, the DJ1205.

Though it may not seem fair to compare the DH1250 and the DJ1205 directly since they are in slightly different price categories, they are separated by only $40 ($269.99 and $229.99 respectively). That’s not a huge spread at this price point, though, so comparisons are inevitable. And as we found out, sibling rivalries are not always pretty, and not all family members are cut from the same cloth.

Both the DH1250 and the DJ1205 come in sleek black boxes with their picture on the cover, silver bodies, and earpieces that replicate the familiar bumpy knobs on the side of the SL-1200 turntable. As the two halves of the box are separated, the ‘phones inside are revealed with earpieces folded-in, and a small interior compartment that houses the accessories. The major difference between the DJ1205 and the DH1250: The DH1250 comes with both an accordion-style DJ cable, as well as an iOS compatible cable to allow you to make calls, adjust volume, and advance songs on-the-fly with your iOS device. The DJ1205, however, comes only with a single 3-meter long DJ-style cable that is not removable. Already, we’re missing one of our favorite features from the DH1250! The rest of the accessories are the same, with a screw-on 24K gold ¼-inch jack, and a black leatherette bag for storage and travel.

The lack of an iOS-compatible cable in the DJ1205 is disappointing because these headphones probably make a better option for listeners less interested in DJing, and more interested in consumer headphones. They are both lighter and smaller than the DH1250s. The design is also less conspicuous, featuring a more toned-down matte silver and black color scheme with a nice black leatherette band and black extension pieces. The result is a great look suitable for an urban commute, or a walk around the neighborhood. We found the on-ear earpieces to be well-padded and comfortable as well. Panasonic also claims they’re water-resistant, which can come in handy.

The earpieces rotate in for storage, and rotate out DJ-style for single-ear listening. There’s a hold switch, which allows you to keep the earpieces locked in place in either position. The one-ear style is pretty comfortable, actually, and it should work well for single-sided listening over a long DJ set.

One of the DJ1205’s greatest drawbacks is its lengthy cable which, while appropriate for DJ work, is totally unsuitable for casual use. On the town, there’s simply no place for the long, coiled cable to go. It ends up loping around by the knees, or stuffed bulkily into a sweatshirt pocket. We’re sure this is a convenient cable style for those behind the DJ table every night, but anyone using these headphones on the go will find the cord is seriously cumbersome. Again, we wonder why Technics didn’t add the removable cable option and include a shorter, more user-friendly cable. Finally, the DJ1205’s have poor natural noise-isolation properties, and music played at anything but high listening volumes is no help either. These are notable shortcoming, especially when compared to cans like the Monster Inspiration.

We wore the DJ1205’s for long periods at a time with no real discomfort. The headband could stand to have a little more padding, but overall these things are a pretty nice wear, and look fairly good. We found them to be much lighter and more comfortable over long periods than the DH1250’s, and a lot less bulky.

When we break past the $200 price-point, we expect a lot from a headphone’s sonic performance. To be sure, the RP-DJ1205’s do some things well: They have a clean stereo sound that is well-balanced for most listening, distortion is low, even when cranked up to a high level, and they deliver all of the instruments in the mix with clarity. However, these ‘phones fall well short of their $40 upgrade, the RP-DH1250’s.

Depth — the bold expansion of sound from back-to-front, as well as left-to-right — was brilliantly accomplished by the DH1250’s, so we expected more of the same from the DJ1205’s. However, if the DH1250s’ rich handling of depth was described as 3D, then we would have to say that the DJ1205’s are stuck in 2D. This was revealed on one of the first tracks we tested, “Once in a Lifetime” by Talking Heads. Though the song was spread out well in stereo, there just wasn’t that feeling of expansion we were expecting from a pair that was introduced under the same line as the DH1250’s. We also noticed very little definition in the instrumentation, especially in the percussion. Snares sounded thin and papery, and the hi-hat’s dull lack of brilliance bordered on the annoying after a while.

Dullness in the percussion was repeated again when we cranked up some old Van Halen. Sure, everyone’s always listening for Eddy’s guitar tone and solo chops, but Van Halen tracks usually have some impressive drum sounds as well. We found the drummers toms to sound flat and absent the richness we were expecting. There was a nice moment at the beginning of “Jump” where the familiar and brash synth was spread out widely in both ears and brought a cool feel with it. But again, we kept asking ourselves, “What happened to the snare?” Percussion seemed to shift from our favorite tones in the DH1250’s to our least favorite in the DJ1205’s with the passing of just a couple of Andrew Jacksons.

We also noticed a general lack of power in the bass and mid-range frequencies, though it was hard at times to nail down just what we were missing. We enjoyed some nice boom in the deep-echoed kick displayed by the song “Carry It All” by The Decemberists, as well as in the ultra-low 60Hz tones in hip-hop tracks like “Just Another Day” by Too Short. However, in higher registers of the bass, there was a distinct thinness to the sound. This was especially evident with electronic-based music such as New Order, or Radiohead. We found the tone in these low frequencies unmistakably weak, a trend which extended into the mid-range and beyond. In general, the DJ1205’s really didn’t give that jolt of power and definition across the entire spectrum that is implied as a Pro DJ headphone, and delivered by the DH1250’s.

There are some nice moments brought to the table by the RP-DJ1205’s, but, at almost $230, we found it hard to stop comparing them with the $270 RP-DH1250’s. Even when we tried to listen objectively and simply let the DJ1205’s do their thing, the results were lackluster in several ways. They handled balance and stereo sound very well, but their lack of power and definition was a problem for us. We simply found much of the music we listened to thin, and without presence. That coupled with the fact that they had almost no noise isolation and few basic accessories has us ready to move in another direction. For a little extra scratch, you’ll get much more from the RP-DH1250’s, or one of the many other options in a similar price range such as the Audio Technica ATH-ANC9 or the Denon AH-D1100.

How to connect headphones to a TV