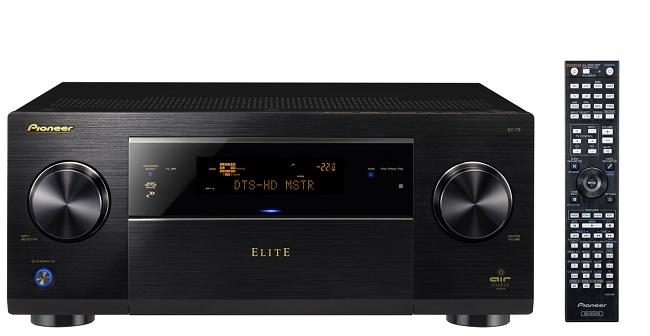 Check out our review of the Pioneer Elite SC-79 receiver.

Much of the focus at CE Week 2013 in New York City has been on 4K Ultra HD and what consumers should expect to see over the next twelve months, but we’re glad to see that more than one manufacturer has not forgotten about the audio side of the equation. Pioneer opened the show with its forthcoming $400 SP-SB23W Speaker Bar designed by Andrew Jones, but it also pulled the curtain back on its new line-up of Elite A/V receivers, including the flagship SC-79 which is the first A/V receiver to support HDBaseT technology.

Israeli tech firm, Valens Semiconductor, gave us a hands on demonstration of HDBaseT last week and we came away impressed with the technology that promises to cut the cable clutter and offer consumers a practical approach to transmitting HD content to HDTVs inside and outside the home. HDBaseT can handle 4K content, automation commands, Internet, HD audio formats, and even send power to your HDTV through a single run of CAT5e wire.

Until manufacturers make the switch from HDMI to HDBaseT (and that’s a big ‘IF’) and offer sources with the connection, consumers will still need to run HDMI to an HDBaseT switcher for the system to work, but with millions of new homes already pre-wired with CAT5e or CAT6, we think the format has a real chance to catch on. Pioneer isn’t waiting for other manufacturers to leap first and has made it a standard feature on its $3,000 flagship model.

Onkyo has also joined the HDBaseT Alliance and we’re expecting to see its first A/V receivers with HDBaseT at CEDIA 2013 in late-September. With Samsung, LG Electronics, Epson, Hitachi, and Panasonic already on board, Pioneer clearly isn’t backing a long-shot.

The SC-75, SC-77 and SC-79 are built for maximum installation flexibility offering a variety of multi-zone set-up configurations.  All nine speaker channels can be reconfigured 11 different ways (12 with SC-77 and SC-79), all controllable from the receiver and/or user’s portable device via the iControlAV2013 app (available for iOS and Android devices). In addition to a true 9.2-channel speaker setup, each amplifier can produce a 5.1-channel configuration with the extra outputs utilized for powering different zones that can be independently controlled.

If you are interested in playing back  high-resolution 24/96 or 24/192 audio files and wish to do it via USB from your laptop or desktop computer, the SC-79 not only allows it, but incorporates a USB 32-Bit Asynchronous Audio DAC allowing direct connection to both Windows and Mac computers. Music played from the computer utilizes the highly accurate audio optimized clock within the receiver, resulting in less jitter. Additionally, the SC-79’s USB DAC supports DSD Native playback (DSD over PCM transfer) via Mac and Windows computers.

All receivers are Windows 8 certified and feature DLNA1.5 certification for music content playback from a networked DLNA server or a DLNA application being used on a Windows PC, Mac, or smartphone connected on a home network, either through a wired Ethernet connection or wirelessly by adding the optional AS-WL300 wireless adapter.

All three receivers support 4K Ultra HD and will upscale lower resolution analog and HDMI video signals to 4K for display on Ultra HD 4K HDTVs. Pioneer has also included support for MHL 2.0 on all three receivers for playback of audio and video content (including high-definition 3D content) and faster charging from many popular phones.