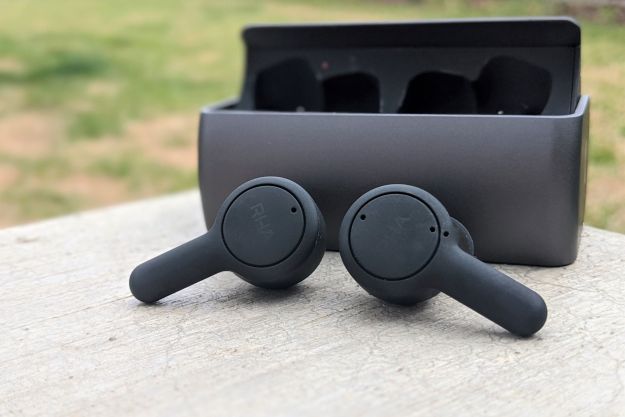 It’s not easy being the RHA TrueConnect 2. Not only are you expected to outperform your own ancestor in the excellent first-generation TrueConnect, but you’re now tasked with creating an impact in a class of true wireless earbuds that has become exponentially more competitive almost overnight.

Objectively, RHA did improve on its original earbuds with its new, $150 TrueConnect 2 by doubling the buds’ battery life and heaping on even greater water resistance. But have these one-time true wireless champs advanced enough to maintain their status among a jam-packed field of great earbuds? That’s the question of the hour for RHA.

Especially in the case of true wireless earbuds, it’s become standard to keep things simple when it comes to packaging. Staying true to that tradition, there aren’t any surprises with the TrueConnect 2. Inside the box you’ll find the earbuds and their charging case, a USB-C charging cable, and several pairs of ear tips secured in a stainless-steel ear tip holder.

There’s no app to download with the TrueConnect 2, meaning all you need to get up and running is a mobile device with Bluetooth functionality. These buds have Bluetooth 5 connectivity, and after over a week of using these buds, I still haven’t had a single connection issue to speak of. If you’re after buds that just work, in the same vein as Apple’s AirPods, these fit that bill well.

There’s not a ton to say here about the design of the TrueConnect 2 that hasn’t already been said about the first-generation RHA buds. Both these pairs are nearly identical in design, probably because there wasn’t anything broken about the original blueprint to fix.

Back in these second-generation TrueConnects is the golf tee structure popularized by the AirPods, as well as the same matte black finish that the originals were dressed in (there’s also a navy-blue option). We said it in the first review, and it’s just too good of a line not to repeat. These are Darth Vader’s AirPods, though I suspect he already had all the noise cancellation he needed inside that helmet.

They are slightly heavier than the AirPods (6 grams, compared to Apple’s 4), and the case is a hefty 79 grams as opposed to the smaller, 40-gram AirPods case. The TrueConnect 2 is just as well-built and unique as the original, though, mostly because there’s really no discernable physical difference between the two.

What is different are the controls in this pair. The first generation each had a button that required multiple presses to enable each command. With the second-gen TrueConnect buds, RHA incorporated capacitive touch controls in an effort to make using the buds that much easier. I will agree that it is better — to a degree. The touch controls are a bit too sensitive, which caused me to accidentally repeatedly pause podcasts and music as I tried to adjust them in my ear.

Speaking of adjustments, the fit with the TrueConnect 2 is plenty secure for more intensive activities, though full disclosure, it was pretty warm during my time testing these buds, so the runs I usually take new earbuds on were much shorter. They held up fine for those stretches, but I can’t comment on how well they would stay in place for the long-distance enthusiasts of the world. However long you have these buds in, they are comfortable, thanks to the soft foam tips included in the ensemble.

The RHA TrueConnect 2 do have a few new features as well as some holdovers from the originals that are still solid perks to point out. The issue, though, is these features don’t do quite enough to differentiate these buds from the plethora of new competitors that perform the same functions, oftentimes better.

RHA nearly doubled battery life from the first TrueConnect buds, outfitting the new version with 9.5 hours of playback and 44 hours of total battery life with the included case. Those numbers easily beat the Apple AirPods and would have been regarded as groundbreaking stats if these buds came out, say, a few months sooner. But the Samsung Galaxy Buds+ and Sony WF-SP800N both beat RHA to market, and each have better playback times (11 and 13 hours, respectively). So, even though I haven’t even unwrapped the USB-C charging cable yet because they have lasted so long, 9.5 hours just doesn’t have the same luster to it that it would have earlier this year.

Water-resistance got beefed up in the new TrueConnect 2, too, with an IP55 rating compared to the first gen’s IPX5. The new rating gives the TrueConnect 2 protection against dust in addition to being impervious to water jets, making these earbuds more than capable for workouts. Sony’s WF-SP800N carry the same resistance, though they are $50 more. The Jabra Elite Active 75t are fully waterproof with an IP57 rating, but once again cost $50 more than the TrueConnect 2.

The TrueConnect 2 is also compatible with voice assistants like Google Assistant, Apple’s Siri, or Amazon Alexa. But if you wanted buds specifically for that functionality, the Google Pixel Buds 2, Apple AirPods, or Amazon Echo Buds would all be better alternatives, respectively.

Beyond those three characteristics, the TrueConnect 2 are otherwise light on features. They do not, for instance, have active noise cancellation. Competitors like the AirPods or Pixel Buds don’t either, but a growing number of competitors are adding ANC on a budget (the Edifier TWS NB come to mind as do the Panasonic RZ-S500Ws), and RHA could have gotten a leg up on the Apples and Googles of the world by working in some effective noise cancellation. As it stands, its absence here is hard to ignore.

RHA says it “refined the sound signature” of the TrueConnect 2, but the truth of the matter is these buds likely won’t sound significantly different than the originals to the average ear. That’s a good thing, however, because both pairs sound pretty darn good.

The authoritative bass from the first generation made the transition to the TrueConnect 2 nicely, displaying controlled low end in songs like Maroon 5’s One More Night or Lizzo’s Truth Hurts. Bass isn’t everything, and thankfully the 6mm dynamic drivers at the heart of these buds seem to be able to handle whatever frequencies get thrown their way nicely. The Faces’ Ooh La La is always a favorite test track of mine, since I know exactly how those opening chords are supposed to sound, and I’m happy to report the TrueConnect 2 did them justice.

I am disappointed that RHA skipped out on aptX support once again, something we were searching for in the originals. The TrueConnect 2 have SBC support but is otherwise incredibly limited in audio codec availability. That said, I would be confident in letting these buds toe the line with most other competitors in their price range, from the AirPods to Google’s Pixel Buds and Samsung’s Galaxy Buds+, with the difference in quality being almost completely subjective when it’s this close. The TrueConnect 2 don’t touch our benchmark buds in terms of audio quality, the Sennheiser Momentum True Wireless 2, but for half the cost we didn’t expect it to anyway.

The TrueConnect 2 have a dual-microphone setup that RHA says is supposed to simultaneously focus on your voice and remove background noise to help improve call quality. From my experiences, RHA got it half right. My voice did come across exceptionally clear during calls I made with these buds, but in multiple instances, the other end of the call caught all the background feedback. When you’re walking down a busy roadway while a woodchipper growls in the distance, it doesn’t make for a pleasant experience for the person you’re talking to.

The RHA TrueConnect 2 used a pair of very good true wireless earbuds as a foundation and improved upon them in a few key areas. But while the TrueConnect 2 took a solid step forward, it feels like everyone else took three. Still, sound quality and features versus the price point can be tough to balance, and while we were looking for more here, it’s hard to fault RHA for the final product given its relatively low cost.

For $50 more, I think the $200 Sony WF-SP800N could be a very compelling option with its better battery life, comparable weather resistance, and its stellar active noise cancellation. If you were looking for buds that could be more friendly to a specific operating system, you won’t lose much in the way of quality by looking at the $199 Apple AirPods or $179 Google Pixel Buds 2, though the TrueConnect 2 beat both in terms of battery life.

The TrueConnect 2 come with a three-year warranty, which is far and away one of the best warranties I’ve seen for true wireless earbuds. RHA is standing by their buds, which should give you some peace of mind in terms of how long these will last.

Yes. Even though many competing buds have gained ground on RHA, the TrueConnect 2 are a solid pair of buds just like their predecessors. They may be in danger of falling into a sea of similar earbuds in the not-so-distant future, but for now, these are still some of the better buds you can find in this price range.