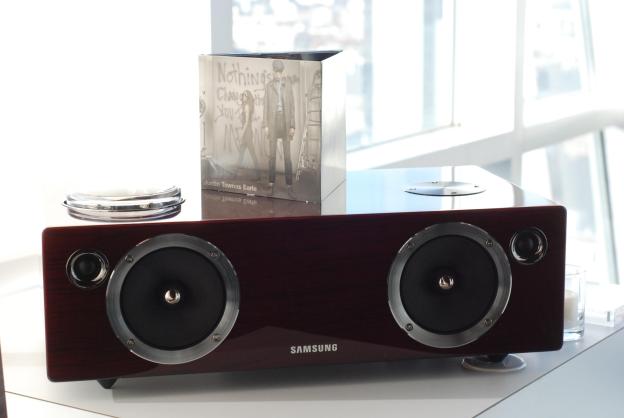 Samsung wasn’t shy about admitting to a room full of A/V writers at an event in New York this past Tuesday that it hasn’t had the best reputation in audio. The company knows it has a strong TV brand — and it’s quite pleased about that, too — yet execs are equally aware that its audio products haven’t exactly gotten the audiophile community salivating.  But Samsung was also quick to point out that it is  working hard — really, really, hard — to change its image.

We’d already gotten a taste of Samsung’s recent efforts at CES 2012, where we got a close look at its prototype DA-E750 speaker dock; but it wasn’t until about half way through Samsung’s power-point presentation this Tuesday that it struck home just how much engineering, design and marketing  effort Samsung had leveraged for some of its new audio systems. Just what is the bright shining star around which Samsung’s audio gear revolution is based? Tubes. That’s right, old school, orange-glowing vacuum tubes. It may seem like backward thinking that Samsung would look to the past in order to move its audio brand forward, but that isn’t exactly the case.

As Samsung noted repeatedly during its presentation, guitar amp makers have been using tubes for years to deliver a specific kind of sound that just can’t be had from transistor-based electronics. Why not apply the same principal to speaker docks and home theater systems? So it is that Samsung has produced two complete home theater packages and one high-end speaker dock based around the idea that the tubes in the pre-amp stage will provide that classic, warm and snuggly tube sound signature (not to mention that romantic glowing tube look). Meanwhile, Samsung’s proprietary digital amp technology provides the muscle to push its speakers.

That’s where Samsung dealt its next surprise: It has redesigned its speakers as well. The new speaker designs incorporate drivers made with a fancy woven-fiberglass material, and shiny phase plugs which Samsung says combine to provide for a lightweight driver with high rigidity and phase coherency, resulting in better sound with lower distortion.

This sort of approach is certainly in line with what many other speaker manufacturers are following, and the idea of using tubes was fun to think about too, but the question remained: Does all of this geeky audio jargon translate into an actual improvement in sound? We’ll reserve our detailed comments and final analysis for the reviews we’ll be doing on these new pieces, but we can share the initial impressions that we gathered during some private listening sessions Samsung provided during the event.

First, we want to point out for anyone who hasn’t tried to demo an audio system in a small, boxy, squared off hotel room before, it’s a tough task. The rooms Samsung had outfitted with its gear were both very small; smaller than most folks’ bedrooms, we’d wager. Yet the company provided some compelling demonstrations in both rooms. The most revealing was a showdown between Samsung’s new tube-based HT-E6730W and the same model from the prior year. The demonstrator switched back and forth between each home theater rig in 2.1 mode as both played identical content in sync with each other. It was plainly obvious that the sound was vastly different. While the older system had a chesty, overly resonant sound in the lower midrange region and lacked detail in the lower treble area, the new tube-based system and woven fiberglass speakers teamed up to offer a much more open and detailed sound. Vocals sounded more natural and the nuanced sizzle of an opening and closing high-hat were far better resolved.

We had the same experience in the next room where we heard the new DA-E750 speaker dock in action for the first time. The unit’s built-in 60 watt subwoofer added palpable bass that seemed to be well in control, save the small room’s tendency to mud things up a bit.

We’ll reserve judgment as to whether we think this new Samsung audio kit is good enough to redefine the company’s name, but we will say that six months ago we’d never have thought we’d be testing Samsung sound systems, let alone feeling a little excited about it. Samsung has shown us enough to pique our interest, though, so we will be doing exactly that. Keep visiting Digital Trends for reviews on the DA-E750 speaker dock (SRP: $799.99)  and the  HT-E6730W (SRP: $999.99). You might be surprised by what we have to say about Samsung’s latest efforts.

Topics
Marshall’s latest Bluetooth speaker has four drivers for 360 sound
The best waterproof Bluetooth speakers for 2023
BluOS will be updated to 4.0 with a fresh look, new features
The best Bluetooth speakers for 2023: Marshall, Sonos, JBL, and more
Is there a Sling TV free trial? Here’s what you need to know
What’s new on Apple TV+ this month (February 2023)
YouTube TV loses MLB Network and MLB.TV add-on
YouTube TV: plans, pricing, channels, how to cancel, and more
Apple’s MLS Season Pass is about more than just streaming games
Best 75-inch TV deals: Get a large screen for the Super Bowl
Flash sale drops the price of this 55-inch QLED 4K TV to just $370
Netflix expands its spatial audio, number of devices that can download content
Sony’s 2023 AV receivers are Sonos-ready and work with wireless speakers