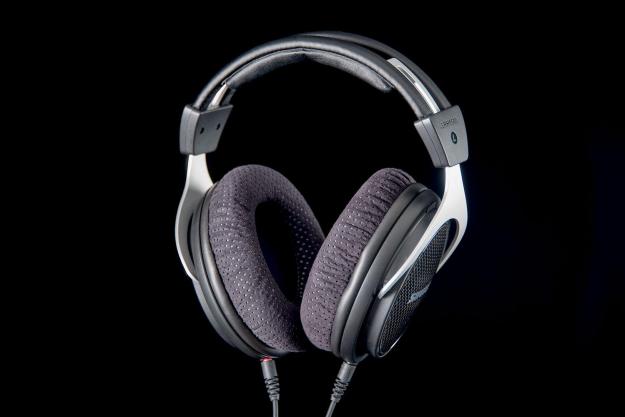 “The SRH1540 epitomize our “ideal sound,” making fewer compromises and scoring more wins than any full-size headphone we’ve heard under $1000.”

We’ve reviewed some pretty expensive headphones in the past; two chart-toppers include the $2,000 Audeze LCD3 and the $1,400 Sennheiser HD800 – cans so expensive that most folks probably looked at them the way they do a Ferrari or Rolex. In other words: They’re toys for rich people.

But the Shure SRH1540 are a different animal. Leaning toward the high end at $500, these full-sized, over-the-ear, closed- back cans may be pricey, but they’re achievable – especially for anyone who’s gotten used to the idea of a $400 pair of Beats by Dre. The thing is, the SRH1540 don’t have any of the flashy features commonly associated with premium headphones these days. There’s no active noise-cancelling, no Bluetooth for wireless audio, no control cable with microphone. In fact, aside from some carbon fiber-backed ear cups, the SRH1540 don’t have much to cover in the features department.

But if you’ve seen our score, then you already know that the SRH1540 can perform. In fact, they are the first headphone we’ve ever rated a perfect 10.

We’re used to big boxes like the one the SRH1540 came in, but we’re not used to seeing a case of the same size sitting inside. This was our first indication that Shure took the SRH1540 pretty seriously, and that we probably should too. The case is the sort that you might expect to get with high-end studio monitor headphones (but never do), designed with protection and storage in mind first, and portability a distant second.

Since the headphones are large and don’t fold down, the hard-shelled, zippered has to be big. Inside the case we found the headphones resting in a cut-out section below, with two zippered bags stuck to a panel via Velcro just above.

In each of the bags we found two identical cables and a single, screw-on ¼-inch adapter (more on the cables in the next section). Underneath the panel, we found replacement ear pads just like those already installed on the headphones.

We were struck by how incredibly light the SRH1540 felt as we lifted them from their case. We’ve tested plenty of smaller over-ear headphones that were considerably heavier, but not necessarily stronger. We credit the headphones’ carbon-fiber inlays and use of aluminum for their feathery feel. Still, there’s a sense of quality imparted by the SRH1540’s over-all look and feel which can’t be denied. We think much of that impression is due to the extreme level of flexibility the headband allows.

Each strip of the SRH1540’s split headband is padded and wrapped in leatherette, a design that helps make the headphones light and pliable. We found the padding was more than ample for keeping long listening sessions comfortable.

For all of the SRH1540’s premium parts and build quality, it is clearly intended for day-to-day listening.

Further down, we find two inverted U-shaped “yokes” on which the ear cups are hinged. The aircraft-grade aluminum pieces easily slide up and down the headphone frame, making size adjustments quick and easy. The ear cups failed to articulate as much as we expected, but we would later figure out that the headphone’s extreme flexibility helped to ensure a comfortable, secure fit at all times.

The ear cups (and the 40 mm neodymium drivers that hide within them) are what make these headphones truly spectacular. Shure has used memory-foam padding, but covered it in velvety, perforated cloth instead of mirroring the leatherette headband. It is hard to adequately describe how incredibly luxurious they feel, especially for longer listening sessions, but we’ll try in the next section.

Rounding out the package are two 6-foot long, Kevlar reinforced, oxygen-free copper cables. The threaded 3.5 mm jack and screw-on ¼-inch adapter are all gold plated, as are the clever MMCX connectors that fit into the ear cups. These micro-miniature connectors are magnetic and pop right in. Getting them out takes a bit of force, but they will break away under extreme situations. This keeps the connections secure, yet safe from breakage. It also helps keep the entire package nice and light. We also noted copious amounts of strain relief on the cable. There’s a large strain relief on the source end of the cable, a little at the MMCX connections, and one on each of the three “Y” legs where the cable splits. All of these features combine to make for one of the most robust cables we’ve seen in a consumer headphone.

And it is a consumer headphone. For all of the SRH1540’s premium parts and build quality, it is clearly intended for day-to-day listening. A studio monitor would likely have come natively terminated with a ¼-inch TRS jack, featured a coiled cable, and connected to the headphones on one side only.

The problem with most full-sized headphones we test is that their large size and weight usually make them a little cumbersome, and eventually uncomfortable to wear. Sennheiser’s HD800 were impossible to forget you had on. With the Audeze LCD3, we just felt it would be best for us to sit still. Even the V-Moda Crossfade M-100 had enough clamping force at play that we’d ultimately need a rest.

Despite their size, Shure’s SRH1540 are the most comfortable headphones we can recall wearing. Their lightweight frame, gentle but firm clamping force, and soft ear pads made putting them on like strapping a couple of pillows to our head. And never – not even once – did we ever have any trouble with heat build-up or ear sweats. Sure they’re big, but they are so comfortable we could wear them all day – in fact, we did.

Simply placing the SRH1540 on your head doesn’t seem to provide a remarkable amount of passive noise isolation. In the office, we could still hear nearby discussions, and loud construction work bled through, remaining as distracting as ever, if just a little bit less edgy. But with music playing at even moderate volumes, we managed to shut out the world around us. On a recent flight, we missed having active noise-cancelling for toning down the drone of the plane’s engines, but, again, the headphones had no problem delivering crystal clear audio from movies and music, even at moderate volume settings. While we own a pair of Phiaton Chord MS 530 and generally prefer them for travel, we still wound up pulling out the Shure cans for sheer listening pleasure.

We’ve long tended to prefer headphones from companies that make microphones. That’s likely because headphones are a lot like a microphone in reverse … or is it the other way around? Regardless, Sennheiser, Audio-Technica and Shure have held consistently high positions in our top 10 lists of the best headphone manufacturers, and the SRH1540 might just be Shure’s best work to date.

Admittedly, sound quality is a highly subjective – some listeners prefer a bit more bass, others prefer spicier treble, others still get hung up on less obvious attributes like transient response. Each person has their own “ideal sound,” even if they have a tough time expressing what that’s like. For us, the SRH1540 epitomize our “ideal sound,” making fewer compromises and scoring more wins than any full-size headphone we’ve heard under $1,000.

Name some sonic attribute – anything as related to headphones, really- and we can say with complete confidence that the SRH1540 make us happy in that department. Perhaps the real magic with these headphones is that they don’t do anything wrong. Bass is capable of getting extremely deep and potent, but it is never out of line with the source material. Midrange is totally clear of congestion, which came as a big surprise considering the headphones are a closed-back design. Treble sparkles, shines and rings with pitch-perfect intonation, but never hints at anything remotely related to harshness. Cymbals, for instance, didn’t just splash about, painting a shiny wash behind the music, they rang out with sophisticated textures and harmonic nuances that you usually don’t hear outside the context of a live performance.

The same can be said for the air around wind instruments and the way in which they were reproduced without ever sounding squashed. A lot of that has to do with the SRH1540’s excellent dynamic expression, which allows for subtle nuances between soft and loud sounds to play a prominent role on a wide and deep sound stage.

Sure they’re big, but they’re so comfortable we could wear them all day – actually, we did.

We were so excited about the SRH1540 that we passed them on from one friend to another (most of them musicians or studio professionals) seeking their first impressions. Each and every one of them had something positive to say, but what’s more remarkable is just how quickly they tendered their positive praise. As our own Ryan Waniata put it after all of 5 seconds of listening, “They just sound right, and right away, too. Immediately, you can tell you’re dealing with a high-quality headphone.”

What really blew us away? These were impressions based off of material – some of it compressed to 256k – being played back on an iPhone, a device not exactly revered for its hi-fi capabilities. This is great, because it means almost anyone can get in on this great sound. And lest you think that this somehow dumbs the SRH1540 down in some way, let us assure you an upgraded DAC and headphone amp can take these cans to a whole new level.

We had an especially good time using Cambridge Audio’s DacMagic XS USB device, which is both an impressive compact DAC and stellar headphone amp. The combination of the headphones and that little USB audio device was simply spectacular. Granted, it’s a $700 combo, but what a treat it was – our laptop was transformed into a portable hi-fi music server, and we had a hard time disconnecting from it.

Shure’s SRH1540 define the point of diminishing returns in headphone fidelity, and they are unparalleled in terms of comfort. That combination is deadly, especially at the $500 price point. The audio performance chasm that exists between these headphones and their closest under-$500 competitors is deep and wide. Yet, the difference between the SRH1540 and a pair of headphones that cost $1,000 or more is very hard to notice. Shure keeps these headphones simple. We understand their lack of modern features may be a turn off to some, but for die-hard audio enthusiasts, we don’t see it being a problem. It’s hard to imagine anyone having something bad to say about these cans – we couldn’t come up with anything other than “they’re expensive.” Still, money can and should be saved for something this sweet.

The best cheap headphones and earbuds for 2022
Best Amazon Echo Deals: Get an Echo Show for $40
Audio-Technica is celebrating its 60th birthday with a $9,000 phono cartridge
Amazon’s third-gen Fire TV Cube has great features the Apple TV is missing
YouTube TV (and others) lose another sports channel
The best movies on Disney+ right now (October 2022)
Best new movies to stream on Netflix, Hulu, Prime, HBO, and more
The best TV shows on Amazon Prime right now (October 2022)
The 74 best movies on Hulu right now (October 2022)
YouTube TV now lets you subscribe to some add-ons without a base plan
How to perform the AirPods Pro Ear Tip Fit Test
How to check your AirPods battery level
Are Apple AirPods waterproof? Everything you need to know