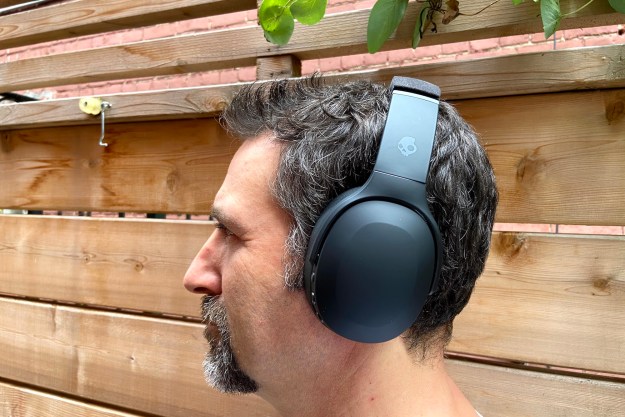 Skullcandy’s original $150 Crusher headphones introduced the company’s Sensory Bass feature which mounts a secondary, dedicated bass driver within each earcup. With an adjustable slider that lets you tweak how much of this head-rattling bass you desire, the feature next showed up on the $300 Crusher 360 and the $320 Crusher ANC.

Now, hoping to prove that good things come in fours, Skullcandy is tweaking the Crusher formula once again with the $200 Crusher Evo. By eliminating active noise cancellation (ANC) but improving the way its Sensory Bass works and throwing in the Crusher ANC’s custom EQ feature, the Crusher Evo attempts to occupy the Goldilocks zone in the Crusher lineup. Here’s how they perform.

Inside the large product box, you’ll find the Crusher Evo, a USB-C charging cable, an analog cable, and a carry/storage bag. The box itself is heavily coated in custom-printed surfaces, with a magnetic-closure front flap, making it hard if not impossible to recycle. The internal black plastic tray is made from polystyrene, which may also be hard to recycle, depending on what facilities exist where you live.

If you’re a fan of Skullcandy’s Crusher line, the Crusher Evo, which comes in matte black or matte grey, will be instantly familiar. Visually, they look identical to the Crusher ANC, sporting the same deeply cushioned synthetic leather earcups, and the same folding design that lets you store them flat or just collapsed.

The Crusher Evo’s bag is the best I’ve ever seen.

They also use the same physical controls: Large, easy to access playback/call/volume buttons on the right earcup, with a power button and the Sensory Bass slider on the left.

They have the Crusher ANC’s fully integrated wiring, which keeps everything super clean, but they also reach back to the original Crusher to grab that model’s fabric-topped headband.

I’m especially impressed by the carry bag. Usually, these items (when they’re included at all) tend to be after-thoughts — just a thin bag to protect your headphones from scratches.

The Crusher Evo’s bag is the best I’ve ever seen. The outer shell is made from durable nylon fabric, while the inside has a deeply plush lining that makes me believe it would not only protect the cans from scratches but probably some impacts, too. Inside are two mesh pockets for the included cables, which is a nice touch, but it’s the closure design that deserves specific praise. No drawstring here. Instead, you get a snap-together buckle that combines with a double fold-over opening for a truly secure way to store these headphones.

The bag specifically says it’s not waterproof and that’s true. The nylon isn’t coated in a water-resistant layer so it will absorb moisture if you get it wet, but it should have no trouble keeping the Crusher Evo protected from the occasional inadvertent splash if you remove them from the bag as soon as possible.

Controls, comfort, and ease of use

Weighing in at 11 ounces, the Crusher Evo are on the heavier side as far as wireless headphones go — probably due to their amazing battery life (more on that in a moment) — but they remain quite comfortable. The headband provides plenty of clamping force and the ear cushions find a nice middle ground between softness and support.

The only thing that keeps them from being comfortable for hours of use is their relatively shallow ear cushion depth. My ears tend to stick out more than some folks, so your mileage may vary, but I found that the edges of my ears started to tire of being pressed against the interior surface of the earcups after about an hour and a half of use.

The controls are perfect as far as I’m concerned.

On the plus side, when the headband sliders are fully retracted, the Crusher Evo offer a much smaller minimum size, so those with smaller than average heads will likely find that these headphones fit them when other models don’t.

The controls are perfect as far as I’m concerned. They’re well-placed, well-spaced, and large enough that you will never struggle to quickly locate the button you want. You can access volume up/down, track skip forward/back, call answer/end, plus voice assistant access (Siri or Google Assistant).

Operation is very intuitive, especially when working with the Sensory Bass slider on the left earcup. I love that it gives an infinite range of adjustment, from nothing-at-all to skull-pounding and everything in between.

One thing that would have been a big convenience — particularly for those of us who jump back and forth between phones and computers — is Bluetooth Multipoint, which lets you pair to two devices simultaneously. Alas, the Crusher Evo don’t have it.

Without an ANC feature to draw down the battery, the Crusher Evo can last 40 hours on a single charge. That’s very impressive. Panasonic’s RB-M700, which features a similar bass module, only gets 20 hours of operation — and that’s when its bass reactor feature is disabled.

The quick-charge feature is equally impressive, with a four-hour boost after just 10 minutes of charging time.

We’ve seen on-ear headphones like the excellent Jabra Elite 45h show as much as 50 hours of stamina, but when it comes to over-ear cans, the Crusher Evo are among the best.

Skullcandy has started to include Tile-based tracking on its headphone products, and it’s a fun and handy feature. Once paired to the Tile app, you can use it to see their last known location and, as long as their battery isn’t dead, you can trigger a high-pitched birdsong-like melody to be emitted by the Crusher Evo so you can physically locate them.

Personally I think this feature makes sense on a smaller product like the Skullcandy Vert, which could easily get lost between a set of couch cushions. I’m just not convinced it’s as valuable for something as big and obvious as the Crusher Evo.

But it works and it’s free, so if you happen to be the kind of person who misplaces everything that isn’t bolted down, it’s a good thing.

Calls on the Crusher Evo were very clear, but only when voices didn’t have to compete with background sounds. Even light car traffic or a brisk breeze presented a challenge with quite a lot of extra noise. There’s no side-tone feature when calling, so your own voice will sound muffled to you, something people sometimes find off-putting.

They’re just fine for casual phone calls, but you might want to make a point of finding a quiet spot if you want your callers to hear you clearly.

The Crusher Evo’s Sensory Bass system is the primary reason to consider these headphones over other wireless models in the same price range. But, according to Skullcandy, the personal audio tuning feature is just as important to the headphones’ performance. Developed with Audiodo, a Swedish company with deep roots in digital signal processing, the personalization is done within the Skullcandy app. After a series of tests in which you register your ability to hear certain frequencies at varying volume levels, you’re given a customized EQ adjustment that you can turn on or off.

According to the app, my hearing is off of “optimal” by a pretty big degree, but the graph that shows this doesn’t explain which frequencies are the ones where I’m in need of help.

The Crusher Evo sound really good without any meddling with their EQ settings.

Unlike almost every audio personalization feature I’ve ever tried, turning it on and off while listening to music delivered a distinct improvement to clarity from the Evo’s base EQ.

High frequencies were significantly boosted to achieve this, and I suspect that if Skullcandy offered a full set of EQ adjustments I could probably have gotten similar results like this on my own, but considering how easy it was to take the test, why bother?

But even if you don’t care to use the personal audio adjustment (or you happen to have optimal hearing), the good news is that the Crusher Evo sound really good without any meddling with their EQ settings.

While not as subtle or precise as what you’ll find from pricey higher-end models like the Sony WH-1000XM4, these headphones deliver a really pleasing mix of lows, mids, and high frequencies. Their soundstage falls into a middle ground that’s just wide and deep enough to give you a good feeling of space.

My favorite aspect though is the Sensory Bass slider. With judicious use of the control, you can bring in just enough extra low end that you can feel the deep thrumming of a hand-plucked bass in a jazz quartet.

Push it farther and fire up your favorite action movie and get ready to have your teeth rattled.

At the top end, it’s ridiculous, with the earcups practically pushing themselves off your head as they try to accommodate the extra air movement created by the bass drivers — but why not? You can always dial it down when your vision starts to blur.

With exceptional battery life, a sound personalization feature that isn’t just a gimmick, and unholy amounts of bass, the Crusher Evo are a great set of wireless headphones for those who want the option of loosening their fillings while jamming to their favorite tracks.

For the same price, you’ll get better comfort and sound quality plus active noise cancellation from the Sony WH-CH710N, but you certainly won’t get the Crusher’s insane bass. Another option for similar quantities of boom is the $150 Panasonic RB-M700, but they can’t compete with the Crusher’s battery life, convenient folding design, or handy carry bag.

The Crusher Evo comes with a two-year warranty from Skullcandy — double what you typically find in this category. They’re solid and well-built and made from decent materials. If you stow them in the included bag when you’re not using them, they should last for many years.

If monstrous bass is your jam, then yes, the Crusher Evo must be in the running for your next set of headphones.