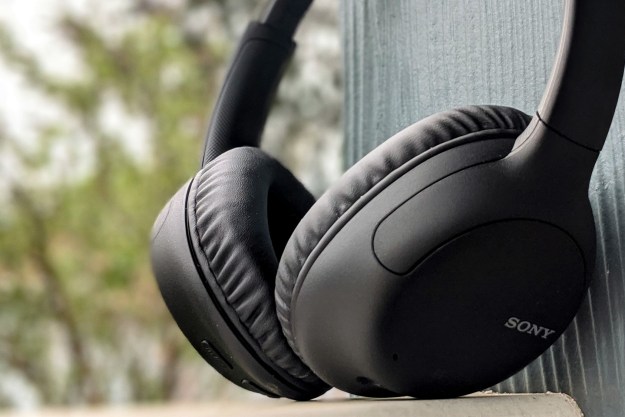 “Sony's WH-CH710N wireless headphones are great at being good”

The Sony WH-CH710N represent the middle ground in Sony’s vast lineup of wireless headphones. They’ve got more premium features than Sony’s entry-level models, without the premium price of flagship models like the WH-1000XM3.

Without question, some corners had to be cut to make that happen. But the $200 Sony WH-CH710N, which will be available for presale this month,  have more than enough features to make them an intriguing value — and an important addition to Sony’s roster.

Corner No. 1: The box that the WH-CH710N comes in is, well, just a box. That’s not something I’m going to hold against Sony, of course. When you save on price, you lose some pageantry, and that’s understandable.

Likewise, there’s no carrying case included with the WH-CH710N. A USB-C charging cable and a headphone cable are included, as is a picture book cosplaying as an operating manual — I found Sony’s online help guide to be significantly more useful.

Bluetooth setup was routine and easy. The WH-CH710N also supports near-field communication (NFC), where compatible devices can pair with the headphones by touching them to the left earcup. That was a breeze, too. After a week of extensive listening with these headphones paired to a Google Pixel 2, I didn’t have any notable connection issues. More than that, I found the range of these Bluetooth 5-supported headphones to be exceptional.

I was surprised at the smaller footprint of the WH-CH710N, at least compared to other headphones I’ve tested recently. They aren’t exactly light, but to me, they were a comfortable size and weight for longer periods of listening.

The oval-shaped earpads were soft, just not the kind of soft that you would expect from higher-quality products. The headband also felt a bit more rigid than I would have liked. These are mainly minor annoyances that didn’t take away from my overall experience.

There are five buttons in total built into the WH-CH710N. There’s a power button of the left earcup, three buttons representing volume and action commands aligned in a row on the right earcup, and a button for toggling between noise cancellation and ambient sound modes lower on that same right earcup. It involved a small learning curve to get used to the various buttons, but I was able to functionally use each one in no time.

On paper, it seems like there would be a lot to like about the Sony WH-CH710N feature set. Among them, battery life and voice assistant compatibility stand out.

The WH-CH710N boasts an estimated 35 hours of playback time with noise canceling on, and 45 hours without it. That’s better than the WH-1000XM3’s 30 hours of battery life, and enough to roll through an entire week’s worth of commuting without having to recharge.

For obvious reasons, I wasn’t commuting when I was using these headphones. But they did last me the entire week with pretty much constant usage, so I can vouch for the long-lasting nature of these headphones. It takes about seven hours to fully charge the WH-CH710N, but you can get an hour of playback from 10 minutes of charging. That’s not quite as fast as the WH-1000XM3, but it’s still decent.

My aforementioned beef with the physical operating guide revolves around activating voice assistants with the headphones. From the physical guide on its own, it’s difficult to get your preferred voice assistant set up. The online guide, though, is thorough in its instructions and briskly walked me through choosing my preferred assistant from the settings on my phone.

I chose Amazon Alexa as my assistant, and a long press on that action button allowed me to do all the things I normally utilize with my Alexa devices, from setting timers while cooking to controlling light bulbs and other smart home products. It might not be a big deal for everyone, but for a person who frequently uses smart assistants, flawless integration was a solid perk.

I’ll just get this out of the way now: The WH-CH710N aren’t going to sound as good as the WH-1000XM3, or other high-end alternatives. They just can’t match the clarity and overall audio quality of those top-tier wireless headphones.

This, honestly, isn’t a huge deal. They weren’t meant to be on par with top-quality products in terms of sound, and they weren’t priced to be either. What the Sony WH-CH710N needed to do was sound good, because they’d be a waste of stellar features if they didn’t.

I’ve got good news. Outfitted with 30-mm drivers and a frequency range of 20 to 20,000 Hz, the WH-CH710N have what I can best describe as dependable audio quality. While I didn’t find a track that blew me away musically, I had a hard time coming across a song that was criminally misrepresented.

If you’re after high-fidelity sound for a fraction of the price, you’ll be disappointed with the WH-CH710N, especially with limited codec support that includes SBC and AAC. But, with realistic expectations, I think most people would enjoy how they sound.

The WH-CH710N are touted as noise-canceling headphones, but they don’t have active noise cancellation technology (ANC) like the WH-1000XM3. Instead, Sony implemented what’s essentially its second-tier, cheaper technology called Artificial Intelligence Noise Cancellation (AINC), which it said is designed to constantly adapt to the environment around it to create the most effective mode for noise cancellation.

To aid in this, the headphones have a pair of microphones in each earcup, one aimed forward and another aimed back, to try and pick up as many ambient sounds as possible. They also have an ambient sound mode to bring outside sound in without having to pull the headphones off, and an option to turn off noise canceling and ambient mode altogether.

From my experiences, the AINC featured in the WH-CH710N works … to an extent. At normal listening volumes, it filters out some lower frequencies well. But some jarring noises still found their way into my listening experience. Like, say, the neighbor’s power tools during a weekend project. The noise cancellation dampened these sounds to a degree, but it was nothing like what I’ve grown accustomed to with more premium headphones.

For the right person, there’s great value in the Sony WH-CH710N. It’s got a nice set of features for its cost, if you’re OK sacrificing some sound quality and noise-canceling prowess in order to keep within a budget.

That depends on what concessions you’re willing to make. The WH-1000XM3 have come down in price considerably, but they’re still regularly almost $80 more than the $199 WH-CH710N. The previous model in the lineup, the Sony WH-CH700N, have dropped to $129 and have similar features, namely identical battery life. But the latest model has new components and technology, which might make it worth the extra expense.

The Sony WH-CH710N headband may be rigid, but it feels durable, as does the rest of the product. As long as they’re not abused, these should be able to be your daily cans for the foreseeable future.

Yes. They are not their higher-priced, popular older sibling. But at the end of the day, the WH-CH710N deliver excellent battery life and adequate sound for a manageable price. They aren’t the best, but they’re great at being good.