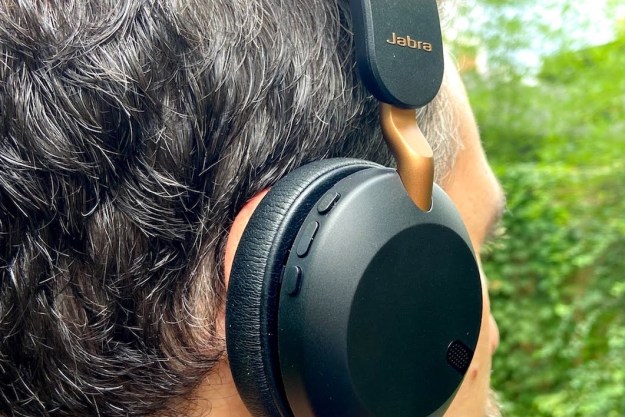 Shopping for wireless headphones in the $100 range is a nearly impossible task. There are so many models to choose from, and so many styles and features to consider, it’s a wonder more people don’t give up from sheer choice paralysis.

The good news is that all of this choice leads to a fierce amount of competition between companies with buyers ultimately the winners.

So while you might view the launch of yet another model — in this case, Jabra’s on-ear $100 Elite 45h — as something that makes this choice even harder, see if you still think so once you read our full review.

Let’s get into it.

Jabra has been going increasingly minimal (I guess that’s kind of like “jumbo shrimp”) with its packaging and the Elite 45h comes in a simple cardboard box with an even simpler cardboard sleeve. The only hint of plastic is the small retail shelf-hanger loop.

Inside, you’ll find the Elite 45h, protected by the included thin-yet-stretchy carry bag, and accompanied by a single accessory: A short USB-C charging cable.

Until the Elite 45h, Jabra’s most affordable wireless headphones were the $99 Move Style Edition — a very highly-regarded on-ear model. The Elite 45h may have adopted the Move’s price, but their styling and design cues borrow as much from Jabra’s flagship Elite 85h noise-canceling headphones as they do from the Move.

Regardless of which one of the five color schemes you pick, these are seriously good-looking on-ear cans.

With their ultra-clean lines and tasteful accents, the Elite 45h possess a premium look that reminds me of Denmark’s other big audio brand: Bang and Olufsen.

All traces of fabric have been removed, however, leaving the Elite 45h clad entirely in plastic, silicone rubber, and synthetic leather. This could have resulted in a drab, sterile vibe, except that Jabra uses anodized aluminum for the one-piece sliders and earcup pivots.

Regardless of which one of the five color schemes you pick (titanium black, gold beige, copper black, black, or navy) these are seriously good-looking on-ear cans.

The Elite 45h don’t have folding hinges like the Beats line of headphones, but the earcups do fold flat, which actually makes them easier to stow in a backpack, especially if you’re already toting a flat device like a tablet or laptop. Oddly, when worn around your neck, the ear cushions face up, not down, when lying flat.

But perhaps the most distinctive element of the Elite 45h’s design is the continuous ear cushion surface. Unlike virtually every other set of on-ear headphones, which end up looking like miniature versions of their larger over-ear siblings, the Elite 45h’s ear cushions don’t have a defined edge — the synthetic leather covering simply moves all the way across, interrupted only by a circular set of perforations to let the sound come through.

Why did Jabra opt for this approach? Other than the clean-lined continuity they offer to the overall look of the Elite 45h, there are comfort and sound benefits too, which I’ll discuss further down.

I can find only one flaw with the design of the Elite 45h: They lack an analog headphone input. That might sound like a deal-breaker, but as you’ll see soon, I doubt you’ll mind at all.

The Elite 45h weigh a bit more than the Move Style Edition (160 grams vs. 150 grams) but you’ll hardly notice any weight at all once they’re on your head.

Their mass is very well distributed and the headband’s clamping force keeps the somewhat narrow point of contact with the top of your head from feeling fatigued.

The continuous surface of the ear cushions shouldn’t make much difference to how they feel. After all, beneath that surface is the same oval-shaped cushions you’ll find on all on-ear headphones. And yet, they do, by further distributing the clamping pressure, like a set of miniature trampolines for your ears. Once you get them positioned, they’re incredibly comfortable.

With the Elite 45h’s extraordinary 50 hours of run-time between charges, range anxiety should now be a thing of the past.

There is a drawback to all of that wonderful distribution of pressure, however. Because the ear cushions no longer have a defined ridge, they can’t quite grip your ears as well as a more traditional design. Because of this (and the narrow contact ridge of the headband), they shift more easily when you move your head.

While not a problem when sitting at a desk or on your daily commute, it’s less than ideal for jogging or any activity where impact or quick head moves are part of the routine.

The Elite 45h uses a set of four physical button controls plus a power/Bluetooth switch, all of which are on the right earcup. Unlike a lot of wireless headphones, the Jabra Move included, the four main buttons are mounted high on the outer rim of the earcup, near the slider pivot.

This encourages you to grip the rim with your thumb and middle/ring fingers while you press the controls with your index finger.

Play/pause, volume up/down, call answer/end, and track skip forward/back are located behind the slider while the dedicated voice assistant button sits in front.

Now that I’ve had a chance to get used to it, I’m a fan of the layout. I found my index finger is not only more adept at fine movements than my thumb (which is usually tasked with pressing headphone buttons) but it’s also more sensitive to small shapes and finding edges.

Pairing via Bluetooth is a snap — simply do the now very-familiar steps of turning the headphones on when you take them out of the box and then find their name in your Bluetooth settings menu.

But the real star attraction is their Bluetooth Multipoint capability which lets you pair two devices simultaneously. It’s not a feature you often find on headphones at this price (Sony only just added it to its $350 WH-1000XM4) and it’s super handy for anyone who wants to stop worrying about switching between a phone and a laptop, or a phone and a TV — with Bluetooth Multipoint, it just works.

The Elite 45h have great sound quality, with a nicely balanced EQ, right out of the box.

You don’t get a huge wireless range from the Elite 45h — just 33 feet under ideal conditions — but just like Jabra’s other products, it’s a stable and reliable connection which never falters.

Remember when I said I didn’t think you’d mind that there’s no analog headphone connection on the Elite 45h? Well, that’s because wired connections on wireless headphones have really only existed to calm the range anxiety nerves of folks who worry about running out of battery.

With the Elite 45h’s extraordinary 50 hours of run-time between charges, that anxiety should now be a thing of the past.

But let’s say you somehow manage to deplete the Elite 45h’s battery — even though a pleasant voice tells you the battery status every time you turn them on, and they can power down automatically when not in use — don’t panic. If you can spare 15 minutes for a quick-charge, they’ll reward you with 10 more hours of listening time.

The Elite 45h have great sound quality, with a nicely balanced EQ, right out of the box.

Jabra likes to boast about the size of the drivers in these cans, but at 40mm, they’re not only similar to many other models in this price range, they’re the same size as Jabra’s own Move Style Edition.

What matters a lot more than size, is the design, materials, and tuning of the drivers, and thankfully, Jabra did a bang-up job.

Unlike some of Jabra’s other products like the Elite 75t true wireless earbuds, which go heavy on the bass, the Elite 45h aim for that sweet spot where all of the frequencies coexist in harmony.

As on-ear headphones, you don’t quite get the immersiveness of a set of over-ears, but the Elite 45h’s unusual ear cushion design gives these cans a slight advantage: They offer better passive noise isolation than I’m used to.

This lends a greater sense of intimacy to the sound and helps keep details clear that might otherwise get drowned out — not bad for a set of $100 headphones that don’t have active noise cancellation (ANC).

Find a quiet spot to listen and the Elite 45h really come into their own. Whether it’s the deep groove notes that lead Linkin Park’s new track She Couldn’t, or Adele’s signature soaring vocals, these cans managed to put a smile on my face.

I think they pretty much hit the bullseye, but if you disagree, that’s OK. Thanks to the free Jabra Sound+ app for iOS and Android, you can fine-tune the Elite 45h to your preference with a decent collection of EQ presets and the ability to store your own.

Jabra prides itself on its call quality and rightly so — its products have a long history of being excellent for wireless calling both inside and outside the office.

The Elite 45h largely continue this tradition, offering a good mix of overall voice quality and cancellation of background sounds. I wouldn’t describe it as the kind of experience you’d get from a set of high-end Bose or Sony headphones (given the five or more microphones these fancy cans have, that would be miraculous) but for their price, they’re very good.

What the Elite 45h have that most other headphones in this price range lack, is a side-tone option that can be adjusted and switched on and off from within the Sound+ app.

With side-tone engaged, you can hear more or less of your own voice during calls. This helps you shout a little less and makes calls sound more like they do when holding a phone to one ear.

It’s a great feature, but you’ll need to pay attention to how much side-tone you’re using. I found that anything over about 25% produced a noticeable high-frequency buzzing sound — presumably the result of two onboard mics trying to amplify my voice without simultaneously amplifying all of the sounds around me.

I’d also like a way to activate side-tone when not on a call, but perhaps that will be addressed in a future software update.

In the crowded $100 wireless headphone market there are few models that manage to sound as good as the Jabra Elite 45h, and none that do it with the Elite’s combination of style and battery life.

I’m not sure you’ll find anything better than the Elite 45h for $100, but there are definitely other options. The $100 Status Audio BT-1, for instance, are great for sound and comfort and have an analog input, which the Elite don’t possess. For a bigger bass-oriented sound, Sony’s $120 WH-XB700 are also a great choice and often go on sale for $100.

Jabra’s products are among the best-built you’ll find. The Elite 45h comes with a two-year manufacturer’s warranty against dust and rain, even though Jabra doesn’t expressly claim an IP rating for these headphones.

You can expect the ear cushions will need to be replaced occasionally, but these aren’t expensive and can be ordered via Jabra itself or one of its retail partners.

Yes. Unless you need them for jogging or other high-impact, high-movement activities, the Elite 45h are a great buy.