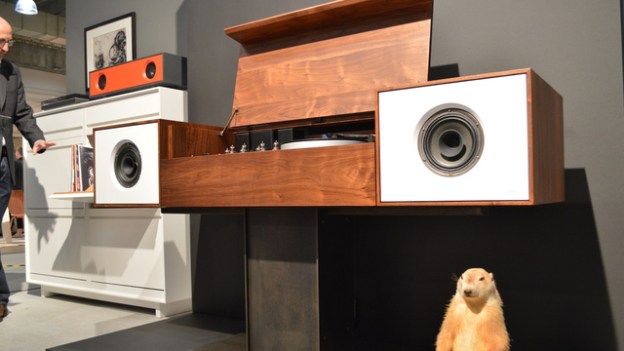 Situated along a narrow roadway that looks down upon the western bank of the Hudson River in Nyack, New York sits a design firm that is flirting with danger. The folks at Symbol Audio probably don’t know it yet (although I suspect they are starting to figure it out) but they have created a product that deserves a lot of attention. And not just from the buying public – at least those who can afford its initially-high asking price – but from the industry that pretends to sell lifestyle.

Our earlier coverage of the Modern Record Console generated a lot of buzz, but that could never have been the end of the story for me. After finishing the initial piece on this $26,000 bespoke home entertainment system, I took a trip underneath the basement stairs and extricated more than sixty copies of Dwell magazine (the 10 most recent copies occupy a special place on my night table/permanent remote control stand) dating back to 2000. Yes, it was a convenient way to get out of putting the kids to sleep so my pregnant wife could get more rest, but she understood…for about ten minutes. Husband of the Year.

What’s utterly amazing and shameful is how few homes featured in those issues so much as suggest that the owners own a home stereo. You might see the occasional shot of a record collection and a maybe  few photographs that display a loudspeaker or two, but what’s clear by looking at the magazine is that audio and the modern home don’t seem to dwell together. I can understand the reticence of the homeowner who doesn’t want the public to know that they have an expensive system; but if you’ve already invited us into your home, what’s the big deal?

Audio equipment, with some notable exceptions, is widely considered better heard than seen. A lot of people prefer to install in-wall/in-ceiling loudspeakers because they don’t want to see it, but doesn’t that strike anyone as being boring? I know plenty of custom integrators who do a good job for their clients, but every system they install has one thing in common: they end up in a rack behind a locked door.

The high-end audio industry has not only failed at selling its sophisticated wares as a lifestyle purchase akin to a new car or room full of fine furniture, but it has forgotten that most people do not live alone and that purchases are rarely made in isolation. Women have become far more involved in home entertainment buying decisions and are unlikely to approve a large stack of black metal boxes in their living room – especially not ones that require an even uglier equipment rack with wires sticking out. Guess what? They’re not wrong.

The folks at Symbol Audio – who happen to be experienced furniture designers – clearly see this issue from a different perspective. Recently, Symbol invited us up to its showroom to have a listen and talk about how they are trying to turn home audio and music listening into a home lifestyle decision.

Symbol Audio President, Blake Tovin, doesn’t pretend to be an audiophile, but his office sports a 1980’s B&O system with accompanying loudspeakers and a rather interesting record collection, so perhaps he’s just being modest.  Tovin and his partners obviously love music and vintage equipment, much of which can be found in different parts of their office space. But their focus is clearly on tailor-made furniture first, and high-end audio second.

Symbol Audio’s LP Storage cabinets are beautifully built (starting at $3,000) and can be configured to hold as many as 640 LPs. The drawers have a unique hopper design that swivels up and down and holds your records quite securely. The cabinets can also be configured to hold your components internally and there is more than enough room for a turntable and large tube amplifier on top. The pieces are handmade in America, and likely to become a focal point in whatever room they are placed.

Symbol’s new Tabletop loudspeaker ($1,800) system sounds great, and looks dramatically more sophisticated than any competing product, but even Tovin and company acknowledge that it faces some stiff, and cheaper, competition. Don’t be surprised if it turns up in some of the better furniture chains sometime in 2013 because it certainly would appeal to the DWR or Crate and Barrel customer.

The big focus for these guys, however, is the Modern Record Console. Yes, it’s really expensive at $26,000. Is it worth it?

After spending more than two hours listening to it in a showroom setting that I would call “less than ideal”  from an acoustic perspective (concrete floors, a lot of hard surfaces, glass windows, no carpeting) I would say unequivocally: yes.

The 300-pound console is shipped in one piece, and, with the exception of the included Pro-Ject turntable, comes fully assembled. The supplied Sumiko cartridge is factory-mounted to the Project’s tonearm, so all you have to do is place the table inside the unit and connect the tonearm cable to the internal phono stage, which is easy to access inside a front panel.

Omega Speakers custom designed the 6.5″ Alnico HempCone drivers and enclosures (which were designed to be modular,) and they are a perfect match for the 15 watt-per-channel tube integrated amplifier that is built into the console. The console can play plenty loud, but I found the ideal sound quality was somewhere in the middle, where vocals had a real sense of palpability. Vinyl trumps digital with this system – something that was made quite obvious listening to Miles Davis’ Bags’ Groove, which had fantastic bite and showed off how well the loudspeakers reproduce horns. Mumford & Sons’ Sigh No More also showed off the midrange prowess and wall of sound that this console can reproduce.

The digital front end utilizes an Apple AirPort Express, which is connected to an RCA input on the tube integrated. You stream your digital music through this system, but I think that’s the wrong way to go for $26,000. For that amount of money, Symbol should work with customers to use a media server like a Mac Mini and a USB DAC that will deliver far superior sound quality and still allow for control via an iPad or smartphone. The front panel on the console can be removed, so configuring a system like this would be quite easy. When I suggested as much to the folks at Symbol, they didn’t recoil with horror or profess righteous indignation that my idea sucked because I’ve never built anything in my life more sophisticated than a 3,000 piece Lego Star Wars ship (which I appreciated). Symbol Audio has built a stunning piece of furniture that moonlights as a kick-ass home stereo and they’re aware that customers may want some form of customization for that much money.

If music in your home is a matter of significant importance, and you’re looking for that statement piece of furniture to complete a room where you can sit, relax and listen to music with your wife, partner, or BFF, the Modern Record Console from Symbol Audio is without peer at this point.