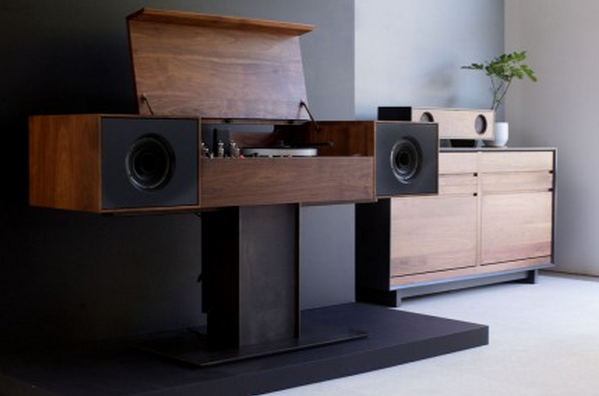 A long time ago, in a sprawling subdivision, far, far away, your parents listened to music on a gigantic record console. Separate audio components were unheard of, let alone fancy component stands designed to minimize vibrations. The record console was such an integral part of the living room that it was also where they hid the booze. It was a fine piece of furniture that you were not allowed to touch. Ever. As technology evolved, so did the record console. Television sets (large CRT units…anyone remember what those are?) began appearing inside the console, which ironically helped to hasten their demise. The stereo didn’t want to share space anymore, so it moved into its own home. Ward Cleaver and Don Draper had one thing in common: they loved their record console even more than their wives. Sadly, American consumers moved from Herman Miller and Eames to Ikea and Martha Stewart.

If you long for a lounge chair and ottoman while downing Glenrothes as Sinatra or Cooke wipe away the stress of the modern rat race, Symbol Audio’s Modern Record Console just might be what your shrink ordered. Bespoke furniture and high-end audio are back.

Audiophiles will most certainly bemoan the price tag (between $18,500 – $26,000 depending on features and finish) and scream that one can assemble a better sounding stereo for a lot less money, but what they fail to understand is that the Modern Record Console is not for them. The console is aimed at the buyer who loves music but doesn’t want to look at ugly racks, cables, power line conditioners or metal face plates. This is furniture which combines a custom-made tube amplifier, phono preamplifier, a turntable, digital audio streaming device, loudspeakers, and powered subwoofer. The console is 66 x 18 x 34 (WxHxD-in inches) and likely to become the the focal point of any room.

The loudspeakers are sourced from Omega Loudspeakers who build great coaxial single drivers (made from Alnico magnets and lightweight hemp) that work extremely well with low-powered tube amplifiers. They lean toward the warm side of neutrality, but don’t rob the music of detail or pace. Coherency and presence are the strengths of these cones.

15 watts per channel may not seem like a lot of power, but the custom tube amplifiers have some hefty iron behind them and are a perfect choice for the easy-to-drive 6.5-inch drivers that are backed up by an 8-inch powered subwoofer built into the base.

You couldn’t call this a record console without a turntable, and Symbol Audio picked a good one to dig the music out of your favorite LPs. The Pro-Ject RPM 5.1 table comes with a 9″ carbon-fiber tonearm and a factory-mounted Sumiko Blue Point No. 2 cartridge. Not that the type of person who buys one will likely care, but the tonearm cable on this turntable can be upgraded and you’re not stuck with the cartridge. The Sumiko is a high-output MC cartridge that retails for around $400 and sounds pretty damn good. A cartridge such as the Grado Sonata 1 or the Dynavector 10X5 would be a great alternative if the Sumiko doesn’t float your boat.

The modern record console also includes the ability to steam digital audio via its internal wireless router. Place your iPhone next to your glass of scotch and enjoy your entire music collection with the touch of a finger.

Don Draper never had it so good.

Sony’s 2023 AV receivers are Sonos-ready and work with wireless speakers
Netflix expands its spatial audio, number of devices that can download content
Klipsch follows the success of The Fives with The Sevens and Nines powered speakers
Marshall’s latest Bluetooth speaker has four drivers for 360 sound
Best 65-inch TV deals: Save on QLED and OLED for Super Bowl
A rare Disney Plus deal just started — get it while you can
LG brings Apple TV, Apple Music, and AirPlay to webOS Hub-based TVs
This Super Bowl deal knocks $2500 off Samsung’s QN800B 8K TV
The best family movies on Netflix right now
The 50 best movies on Netflix right now (February 2023)
There’s a huge Sonos flash sale happening right now
The best movies on Amazon Prime Video (February 2023)
The best new shows to stream on Netflix, Hulu, HBO, and more