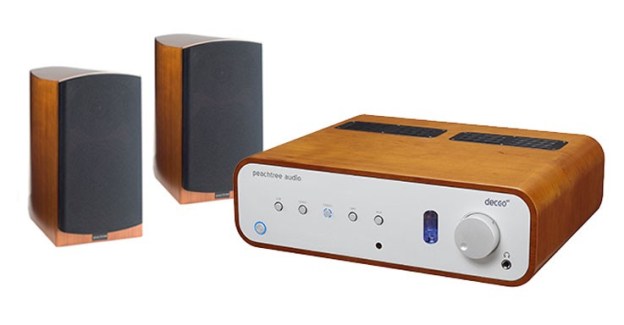 In the first three installments of the “Audiophile System Builder“, we gave you a plethora of options between $1,000-$5,000 that offer a real taste of high-end audio; systems that wouldn’t  break the bank or cause major aesthetic issues on the domestic front. For most people, spending $5,000 on a stereo system is a huge investment. For those of us with kids and nauseating tuition bills, it’s not even a consideration.

But what if $10,000 happened to fall into your lap due to the demise of a distant relative?  It helped the late-Matthew Crawley save Downton Abbey for the Grantham clan, right? So let’s continue inhaling from the special pixie stick for a second and imagine that it could happen for you as well. What would you buy?

An audio manufacturer I greatly respect once said to me, “If you have to spend more than $10,000 on a stereo, you’re buying the wrong stuff. Every dollar you spend above that amount brings only a modicum of improvement; an extra 3-4% if you are really pushing it.” This came from someone who builds some of the best products on the planet, and his stuff isn’t that inexpensive, so I take his words to heart.

Sure, you can assemble systems for a lot more money, and the results can be pretty spectacular, but more often than not the results will be disappointing. A high price tag has never been a guarantee of anything in regard to home audio (except a much smaller budget for music, and that alone should serve as a red light to anyone assembling their first system). Truly, if you can afford to spend $10,000 on a home stereo system, don’t get caught up in the audiophile quicksand that involves cables, expensive power line conditioners, or isolation devices. You’ll blow right through your budget, have nothing left to buy music, and morph into a neurotic social outcast who spends every waking hour trying to hear things that don’t exist.

Our two systems for $10,000 or less offer two different perspectives; one is geared more towards a smaller listening environment and listeners who prefer classical, jazz, blues, and pop. The second system works better in larger rooms, and is better suited for those about to rock. We salute you.

No matter how you butter your scones, the United Kingdom has always been the source of great loudspeakers. The same island that gave us the Beatles, Led Zeppelin, fish and chips, spotted dick, and football hooligans has also produced some of the best transducers going back to the original Quad ESL 57 full-range electrostatic loudspeaker, which Peter Walker introduced in 1956. British loudspeakers have always had a “house” sound – boxy monitors that emphasize the midrange, don’t extend very deep in the bass, and are generally not interested in offending anyone. The emphasis on a clean midrange has pretty much stayed the same over the years, but the presentation has become more vivid with an enhanced soundstage, greater dynamics, and a sudden interest in American-like bass response. The British do love their PRaT (Pace, Rhythm, and Timing), an acronym coined to describe the sound of Naim Audio’s equipment, but in many ways it sticks in 2013 and helps to describe a sound that is all about preserving the flow of the music.

British loudspeaker manufacturer, Harbeth, is a perfect example of this. Their boxy designs do a magnificent job of preserving the flow; offering a clear window into your favorite recordings. None of their offerings bombard you with a wall of sound, nor does the soundstage extend very deep or far outside the physical boundaries of the cabinet. Music flows out of them with an ethereal beauty that makes vocals downright spooky to listen to. Our favorite Harbeth monitor is the Compact 7ES-3, which strikes the right balance between PRaT, transparency, and overall gestalt to make it one of the best loudspeakers for a small-medium sized room. Harbeth makes larger monitors that work better in a bigger space, but we’ve always found them to be best suited for a nearfield listening experience. To be clear: The Compact 7ES-3s are not good loudspeakers for large rooms. Also, these Harbeth monitors like sturdy stands, and we can’t recommend the 19-inch Sound Anchors highly enough. No, they aren’t cheap, but they are the best platform for these loudspeakers.

The Compact 7ES-3s aren’t power hungry, but feed them anything less than 30 robust watts and you’ll never hear what they’re really capable of doing. They don’t favor tubes over solid state; Naim, Rega, Leben, Conrad-Johnson, Arcam, and many other brands work quite well. But the brand that surprised us with the Harbeths most is PrimaLuna. Chinese-manufactured audio equipment gets a bad rap – and, in fact, there are some crappy products worth avoiding like a day trip to the Korean DMZ – but PrimaLuna has a good track record of quality construction, reliability, and great sound quality for the money. This joint Dutch/Chinese venture has a following for a reason.

Their ProLogue Premium integrated amplifier offers a healthy 35 watts per channel from 4 EL34 output tubes – 40 watts if you “tube roll” and swap the EL34’s out for some KT88 output tubes, which have less midrange warmth but greater extension in the bass and treble. This integrated offers four inputs, including a home theater bypass, and weighs in at a sturdy 46 pounds. The ProLogue Premium is a great match for the Compact 7Es-3s, as it adds some texture and warmth to the sound, can match the Brits pound for pound on the PRaT issue, and gets out of the way of the music.

It’s impossible to recommend a pair of Compact 7ES-3s without a turntable, and while there are a lot of great options out there, we really like the VPI Traveler turntable with this system. Rega devotees will cry foul at our selection of an American-made table, but while a Rega RP6/RB303 combination would work really well in this scenario, it will add a few hundred extra dollars to the final bill.

VPI’s tables are all about accurate timing and presence. They provide a stable platform that lets even an inexpensive phono cartridge like the $220 Grado Gold sound far more impressive than it should. Run the Grado, (still handmade in Brooklyn) through the over-achieving Dynavector P75 MKIII phono stage, and you have an analog source that would not be out of place in systems that are twice the price.

On the digital end, connect the super high value AudioQuest DragonFly USB DAC to you computer and you have two sources capable of remarkable sound quality that will last for years to come.

And now for something completely different…

A lot of ink has been spilled on KEF’s LS50s since they made their appearance in Q4 of 2012, and the praise has been unanimous. For $1,500, they offer almost state-of-the-art performance in a small package that is without peer. KEF’s competitors are probably nauseous reading about them every week, but the truth is that they have a lot of work to do if they want to top this exciting product and at its equally exciting price point. When KEF launched its reference Blade loudspeakers to commemorate its 50th anniversary, customers marveled at the performance, but bemoaned the $30,000 a pair price tag. The heart of the Blades is KEF’s Uni-Q driver technology, and it was only a matter of time before it found its way into more affordable products like the LS50 and X300A desktop loudspeakers.

The LS50 have redefined what one can get for under $5,000. Some might even argue that they outperform some $10,000 loudspeakers if you break down all of the audiophile criteria: resolution, dynamics, transient response, spatial depth, and overall gestalt. You can get away with driving them with a 50 watt per channel integrated amplifier like the Rega Brio-R for only $895, but what is so unique about them is that they wouldn’t be out of place being driven by $10,000 worth of McIntosh or Audio Research power amplifiers, either.

Because they are so versatile and easy to set-up, they appeal to a broad range of potential customers. Give them some space from the wall behind them and a few feet from the sidewalls and you’re done. The only caveat with the LS50s is that they are born into this world sans clothing – no speaker grill covers.

For this system, we think a number of amplifier/preamplifier options are suitable. The Mytek Stereo192-DSD DAC/preamp is an American-made product from a manufacturer which focuses on the pro-audio side of the market. What makes the $1,500 Stereo192-DSD DAC such a great value is that it offers SOTA (state of the art) digital playback, an excellent headphone amplifier, and a perfectly competent analog preamplifier. Connect your computer and phono stage and you’re perfectly positioned to experiment with different amplifiers to get the most out of the LS50s. Our personal choice for only $1,500 would be the Class D e.One REF 150s stereo amplifier from Bel Canto, which puts out more than enough power for the KEFs and matches the superb resolution of those two sources.

If you would prefer a one-box solution, the Peachtree Audio Grand X-1 integrated has every bell and whistle imaginable: 440+ watts of power, headphone amplifier, 24-bit/192kHz DAC, and a hybrid tube preamplifier. It’s made in America and is a great tonal match for the KEFs; you would have to spend a lot more for all of its prowess.

On the analog end, the Rega RP6/RB303 combination is pretty hard to beat; great PRaT, color, and so easy to set-up and play. There’s a reason why Rega has sold so many turntables over the years, and it primarily has to do with its unbeatable bang -for-your-buck factor. Mount our recommended Dynavector 10×5 high-output moving coil phono cartridge and you are good to go.

For under $10,000 both of these systems offer sound quality that will redefine what you expect from a stereo system at home, dispelling the notion that you have to blow the bank and mortgage your kid’s future to play with the audio snobs. Remember that it is all about the music and these two options get you 96% of the way there.

I replaced my kitchen TV with an Echo Show 15 — and I kinda liked it
The best gaming speakers for 2023
The best home theater projectors you can buy in 2023
The best soundbars 2023: which should you buy?
The best speakers for 2023: great hi-fi options for music and more
The best Blu-ray players for 2023
Why the Nest Hub Max still rocks as a kitchen TV
Stream live sports without cable with Sling — now 50% off
OnePlus Buds Pro 2 to support Android’s new spatial audio feature
Should you mount your TV above a fireplace?
Disney Plus Free Trial: Can you watch for free in 2023?
The best subwoofers you can buy in 2023
The best Dolby Atmos soundbars for 2023