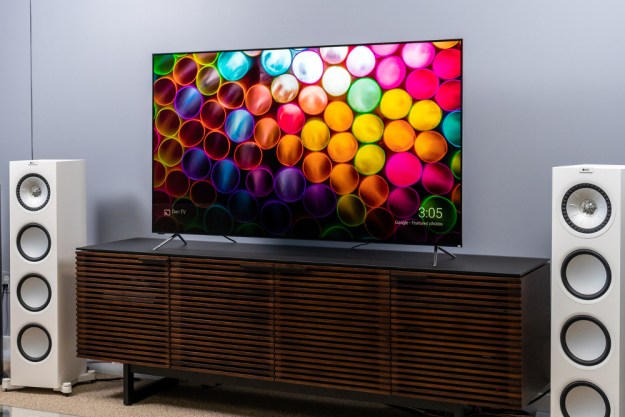 “That you can get a TV that looks this spectacular at such a low price is almost criminal.”

When Vizio created the P-Series Quantum X, it dropped the mic on the TV industry’s stage.

To be fair, Samsung offers a lot in its flagship 4K TV, with features the Vizio P-Series Quantum X (hereto referred to as the Vizio PX) just doesn’t have. Also, the Sony X950G isn’t that far off at $1,700 for a 65-incher, and it is the best 4K HDR LED TV Sony makes this year. Still, the Vizio delivers where it counts: Picture quality. This is a Vizio TV that can compete with the best TVs available today.

The Vizio PX is not exactly svelte – it’s got full array local dimming (FALD) backlights that need some space, so don’t expect a wafer-thin TV, but the display still manages to keep a reasonably tight profile.

This TV is a space hog in other ways, though — if you stand-mount it, anyway. Included metal legs are installed at the far left and right of the TV, and for the 65-inch model we tested, that meant we needed 51-inches of width on our media stand. Fortunately, we have a huge media console so it was no problem, but if you’re considering the Vizio PX, do some measuring before you buy to make sure it will fit (or plan on a new piece of furniture, I suppose).

Once the TV is set up and you stare it down dead-on, you can see where Vizio put most of its design efforts: Almost non-existent bezels on the top and sides, and a very inconspicuous Vizio badge in the lower right corner. It’s a sleek looking TV that’s worthy of the price you’ll pay.

When I tested this TV and recorded my unboxing and review videos, Vizio had not yet released the latest version of its smart TV operating system, SmartCast 3.0. At the time, I found myself frustrated by the user experience. It was slow, laggy, and strangely enough, there was no YouTube app available. The best thing I could say about the experience was that the built-in Chromecast features worked pretty well.

While I’ve not had a chance to test SmartCast 3.0 yet, I will do so soon and update this review. What I can say about SmartCast 3.0 for now is that it brings Apple AirPlay 2, Apple HomeKit, and some enhanced compatibility with Amazon’s Alexa and the Google Assistant through associated smart speakers.

This TV’s intended audience should just go ahead and click that “Buy Now” button.

These new Apple features are not unique to Vizio, but Vizio is bringing these Apple features to its array of smart TVs dating all the way back to 2016 – something competing brands aren’t doing. Vizio also says the new interface is snappier, a claim I look forward to testing.

While I felt compelled to talk about my lackluster take on SmartCast, I want to be clear: Don’t avoid buying this TV based on this one element of my review. It is not a deal breaker, especially with so many streaming device options available.

Frankly, I was hoping for better sound considering the TVs cabinet volume allows for reasonably sized speakers. Fortunately, Vizio makes a very comprehensive selection of excellent soundbars to beef up the audio experience.

While the P-Series Quantum X is no longer in the building, the impression it left has really stuck with me. I can’t tell if this TV makes purchasing decisions harder or easier. On the one hand, picture quality at this price seems like a no-brainer, but on the other hand, I wonder if being led to premium TV waters by an accessible price might induce some indecision among enthusiasts.

There are only two potentially deal-breaking aspects of this TV: Poor off-angle viewing (which I’ll discuss shortly) and lack of future-proofing. The Vizio PX doesn’t offer any of the benefits emerging from the new HDMI 2.1 standard. There’s no eARC (explainer here), no variable refresh rate (VRR), and no auto low-latency mode, all of which are found in some combination or another with many of this year’s competing TVs. I suppose two thoughts to consider include whether you want those future-proofing features badly enough to spend considerably more money and/or are you better off waiting until next year for a Vizio PX that has them?

Frankly, I think this TV’s intended audience should just go ahead and click that “Buy Now” button.

The Vizio PX’s picture quality hinges on a remarkable combination of deep blacks, a uniform screen, and intense brightness potential. It’s rare to get all three of those things in one package, but the PX has them all on lock.

The P-Series Quantum X is a triumph for Vizio.

I tested the Vizio PX using a series of test patterns in SDR and HDR modes using the Spectracal VideoForge Pro pattern generator as well as 1080p and 4K content in both SDR and HDR from 4K Ultra HD Blu-ray discs, standard Blu-ray discs, Netflix, and YouTube. Had it been available at the time I would also have used the new Spears and Munsil UHD HDR Benchmark disc.

Perhaps what stood out most for me was how well the Vizio PX handled SDR content. Most of what we watch is in standard dynamic range, but the PX almost made SDR content look like HDR. But when HDR10 or Dolby Vision content  was played, the Vizio PX was literally lit. The intensity of the HDR highlights was vivid, but tasteful.

Vizio knows how to manage the brightness headroom with which it armed this TV and manages to tone map images beautifully. I observed excellent shadow detail and bright highlight detail as well. I never felt like I was missing anything on-screen as I often do with lesser-quality televisions.

Out-of-box color was good, though I did notice that the TV liked to veer a little too hard into the magenta zone. Normally, a TV in this price range probably wouldn’t get the attention of a professional calibrator, but I would say that in order to get at the TVs true potential,  it is necessary. When you’re saving this much on the TV itself, I think it is fair to suggest spending just a touch more to get the outstanding color accuracy the Vizio PX is capable of.

Off-angle viewing is this TV’s biggest weakness. The TV looks amazing when you are sitting in its relatively narrow sweet spot but move off to the side or up/down even just a few inches beyond it, and image quality goes down in a hurry. It’s worth pointing out that many LED/LCD TVs suffer this problem, but the Vizio PX seems to suffer more than most. If you want more than one or two people to see the beauty of this TV in all its glory, you’ll have to swap spaces with them because those out of the sweet spot are not getting the premium treatment.

Aside from the two weaknesses I mentioned, the P-Series Quantum X is a triumph for Vizio. This is easily the best TV Vizio has ever made, and it gets me extremely excited to see what comes next from the company.

Essentially, Vizio offers a 1-year warranty against defects in workmanship and materials. However, there are a few specifics you might want to make yourself aware of. Check out Vizio’s warranty page for more information.

The Sony X950G is highly competitive in the areas of picture quality and user interface for just a few hundred dollars more, but it can’t get nearly as bright as the Vizio PX. In addition, I feel the Vizio offers better local dimming and, therefore, better black levels overall.

Other than the points mentioned above, the Vizio P-Series Quantum X is in a class of its own.

Build quality seems solid on this TV. If there’s a concern at all around longevity, it would have more to do with the lack of more modern features like eARC and variable refresh rate.

If you want top-tier picture quality but don’t want to spend a ton of cash, absolutely buy the Vizio P-Series Quantum X. You’ll be shocked at how good it looks.

If you’re looking for a discount, you should take a look at the best 4K TV deals available today.

The best TVs of 2022: our favorites from Samsung, LG, Sony, and more
Marantz’s new Cinema series AV receivers are a stylish way to go 8K
The best 4K TVs for under $500: premium picture on a budget
The best Roku TVs of 2022: which should you buy?
FuboTV: channels, price, plans, packages, and add-ons
Amazon’s annual fall hardware event will take place on September 28
PSB Alpha iQ Streaming Powered Speakers connect to pretty much anything
Showtime Free Trial: Get a month of streaming for free
Is new Fire TV hardware on the way at Amazon’s fall event?
Google’s new Chromecast is cheaper, tops out at HD resolution
Apple AirPods Pro 2 vs. Sony WF-1000XM4
Denon updates 8K AV receivers with prices starting at $399
2022’s best TVs for under $1,000