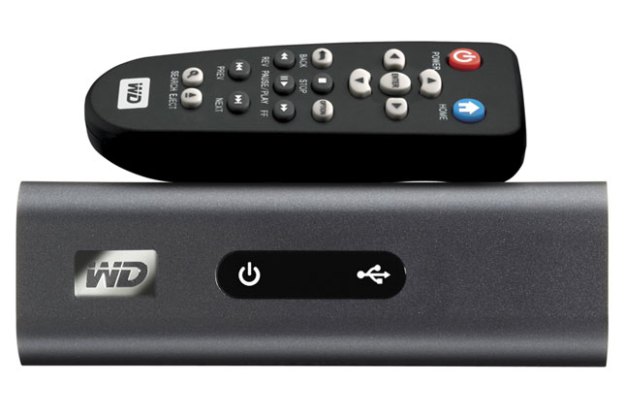 When a $150 box that could fit in your back pocket now does much of what a hulking $1,200 home theater PC used to do – without making so much of a whisper – it should come as little surprise that set-top boxes for digital media have taken off. Western Digital’s WD TV Live Plus brings full 1080p resolution to the table, plus compatibility with Netflix, Pandora, and the ability to stream files over a home network, along with advanced extras like DVD menu support and Windows 7 “Play To” capability.

The Live Plus isn’t much to behold out of the box, but unless you like to bask in a chorus of blinking LEDs below your TV, that’s a good thing. Like one of Western Digital’s My Box drives, the slate grey box has a bookish design with a rounded front face akin to a book binding, but a footprint more like a pocket dictionary than a novel. Around back, you’ll find a power port, USB port, HDMI port, digital audio output, an Ethernet jack, and two 3.5mm jacks: One for composite cables, one for component cables. The only lights on the front correspond to a power indicator and USB indicator up front.

The box supports a number of online services, including Pandora, Live 365, Netflix, YouTube, and Mediafly, which aggregates content from a number of other services. It also supports most common media formats, including XviD, H.264, AVC, and some oddballs typically found on high-end players, like VOB (which lets you preserve the entire menu structure of a DVD). See the spec list at the end of the review for a full list of formats.

The Western Digital WD TV Live Plus comes with every cable you need – short of the one you’ll probably actually use to hook it up. You’ll find composite audio and video cables, component video cables, a power adapter, and AAA batteries for the included remote. Conspicuously missing: an HDMI cable, which you’ll need to get the full 1080p video quality that’s one of the biggest selling points for the Live Plus.

Adding the WD TV Live Plus to the jumble of equipment already crowding up your home theater cabinet is about as “plug-and-play” as you could hope for a device this capable. Pop the DC adapter in a free outlet for power, string an HDMI cable to it, and hope that it’s close enough to your router to run some CAT5. Twenty seconds later, you’re done.

Like the ViewSonic VMP75, the Live Plus supports Wi-Fi, but you’ll need to buy a third-party adapter to enable it. Western Digital supplies a full list of compatible devices online.

If you want to stream music and video from a network-connected PC, you’ll need to make sure it’s running a uPnP server. Sound complicated? It’s really not: Windows Media Player 12 will do it natively, just make sure to enable media streaming. Software like TVersity can also transcode files on the fly to support file formats the WD TV Live Plus HD won’t handle, just as it will for the Xbox 360 and other media streamers.

The second the Live Plus blinks on screen, it presents five options: video, photo, music, settings, and Internet media. Like a tilted version of Sony’s PlayStation 3 “XrossMediaBar” interface, you scroll vertically through each option, then move press right (or enter) to navigate deeper into the tree of choices.

Western Digital’s taxonomy of services can seem a little strange. Where, for instance, would you look for Netflix and YouTube? If you answered “Internet media,” join us in our befuddlement when you discover they’ve both been filed under video. Although it would make sense to put them in both categories, Western Digital instead populated Internet media with just one service: the relatively obscure Mediafly. It acts as a hub to both audio and video content, none of which can be accessed from those respective categories on the Live Plus menu structure.

The ultra-simple remote that comes with the Live Plus seems like a snap to learn, but not as dummy-proof as its simple design suggests. The bright blue home button, for instance, doesn’t take you home. Not as you would expect it to, anyway. It refuses to work from within some media, like a paused YouTube video, and when it does work, it returns you to the deepest menu where you left off, not the top level, making it necessary to manually dig your way out with a couple left arrow presses. Along the same lines, if you have music playing from Pandora as you browse through the menus, the pause button doesn’t work. You’ll need to use “stop” and lose your song completely.

Without either a keyboard or even a number pad, entering passwords is an absolute chore, requiring a clunky on-screen keyboard. It took us a full two minutes, for instance, just to plug in our Pandora username and password.

Access to Netflix, YouTube, Pandora, Flickr and Live365 are compelling, but you’ll also make some sacrifices with the crude clients the Live Plus offers for the services it does support. With Flickr, for instance, you can’t log in and browse your own private photos – probably the ones you actually want to see. Instead, you’ll have to rely on searches, or locating public photos under your own username. And like the version of Netflix available on the Xbox 360, you can’t actually browse the complete library and choose your own titles to stream, only those in your instant queue, related selections, and general categories that go about 75 titles deep. On YouTube, where 720p and even 1080p content now appears regularly, the Live Plus defaults to standard quality and offers no option to view high-quality streams.

Browsing through images, video and music stored on a networked media server feels like a chore due to the slow speed of the file browser. Image thumbnails, for instance, took about five seconds to load on average, making it tough to pick out a picture you’re looking for unless you know the filename. We would happily queue up a slideshow, but doing much more is simply too tedious.

Support for Windows 7’s “Play To” partially redeems the Live Plus, since you can skip over the player’s own interface and simply use a laptop to pick your videos or songs. As long as you have Windows Media Player 12 installed, simply choose a song from the file explorer, right click and tell it to play to the Western Digital box. You can even make queue up playlists for nonstop viewing. Unfortunately, even “Play To” proved troublesome occasionally, refusing to play video out of the blue, then doing it later without issue.

Cinemaphiles will be pleased to find the Live Plus supports VOB files, allowing them to preserve the menus on archived DVDs, and audiophiles will revel in its support for the lossless FLAC format. More mainstream consumers, however, may be less enthused to find it doesn’t support any form of copy protection. That means audio files you’ve purchased through iTunes, not to mention files from subscription music services like Microsoft’s Zune Pass, are all off limits.

Despite an interface that sometimes leaves you pining for the convenience of a mouse and keyboard – or even the responsiveness of the Xbox 360 – the Western Digital WD TV Live Plus delivers functionality above and beyond most competitors in its class. Unlike the ViewSonic VMP75, it offers Pandora and Live365 for music. Unlike the Xbox 360 Arcade, it plays VOB files – and fits into a space about a tenth the size, without making so much as a whir. Though it can’t do everything a PC would do with the online services it supports,like viewing private Flickr galleries or watching YouTube in 1080p, users who aren’t overly picky will likely be happy to have them at this price level. We also hold out hope that Western Digital will enable some of these features over time with firmware upgrades.