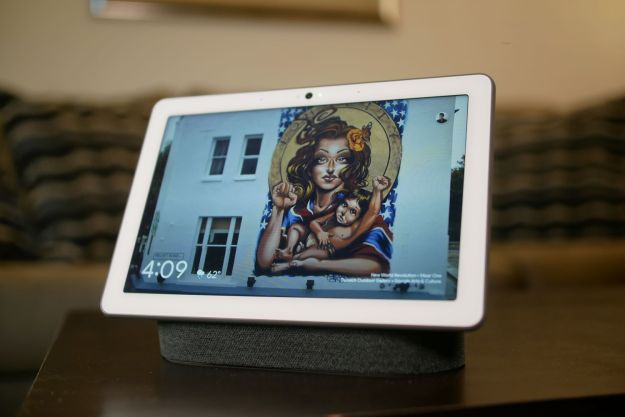 The battle to own prime real estate on your kitchen counter, desk, or living room continues as more and more smart displays vie for your attention. The Google Nest Hub was a respectable device — rendering it one of the better options to consider when shopping for a smart display — but there’s far more brewing with the next iteration of the device, the Nest Hub Max.

Google wants the smart display to function as the centerpiece of your home, and as such, the Hub Max provides security, entertainment, home automation, and virtual assistance. It’s chock full of goodies under the hood, though, the now-traditional design makes it look like your typical smart display. Don’t be fooled, however. There’s more to Google’s latest offering than meets the eye.

A complementary addition to a room

Before taking the Google Nest Hub Max out of the box, the first thing that needs to be addressed is where it should be placed. All the marketing we’ve seen for smart displays showcases them in almost every room, but due to the device’s larger size, it’s not as practical to place on a nightstand or in tighter spaces since it occupies more space than its smaller, 7-inch sibling.

There’s nothing different about the design besides the obvious increase in size, though. As far as smart display designs are concerned, its contemporary look can mesh nicely with various styles of decor. The floating display, combined with its rounded corners and mesh fabric base, gives it a distinctive aesthetic that’s pleasing to the eyes.

Ultimately, we decided to place it on the coffee table in our living room. This was a strategic decision because, unlike the previous version, this one packs a 6.5-megapixel camera. Not only does it offer the convenience of video calls courtesy of Google Duo, but it also acts as a blanket of security because it essentially doubles as a Nest Cam. This doesn’t mean you can’t place it elsewhere, but know that it should act as a complementary addition — instead of being a standout focus.

With a larger, 10-inch 1280 x 800 display, there’s more to love and consume than before. Reading news articles and watching YouTube is easier thanks to the increased footprint, even though it’s only a slight step up in terms of resolution. No matter where you place the Google Nest Hub Max, it’ll also always adapt to ambient lighting conditions, allowing it to deliver optimal results in a variety of scenarios.

The same Ambient EQ technology that made on-screen photos on the Nest Hub resemble real-world prints is back, too. Not only are viewing angles wide and colors punchy, making it superb for video consumption, but we remain impressed by how the Ambient EQ technology makes our snapshots from Google Photos seem as though they’re in an actual picture frame. No other smart display is quite as convincing, which makes it wonderful way to showcase your most recent memories.

Google’s smart speakers are known for bringing Google Assistant to any room, but the more affordable options in the space right now — namely, the Google Home and Home Mini — simply can’t compete with the more audiophile-centric speakers on the market. Yes, the Google Home Max was meant to satisfy those cravings, but the Google Nest Hub Max can certainly fill the void, too. The device is armed with dual 10-watt tweeters and a 30-watt woofer, allowing for substantially more power and making the Nest Hub Max perfect for all sorts of music listening.

You can really hear and feel the bass when beats are pounding on a track, but we recommend staying under level 7 volume because the audio quality becomes strained at higher volumes. Fortunately, you can tweak the bass and treble accordingly via the accompanying Google Home app. We’ve certainly experienced better audio quality with smart speakers such as the Apple HomePod and Sonos One, but the Nest Hub Max isn’t too shabby. It sits nicely between the Google Home and Google Home Max speakers in terms of audio quality. And that, for us, is a happy compromise.

Peace of mind security at a price

Thanks to the addition of a front-facing camera, the Nest Hub Max essentially functions as a Nest Cam, providing peace of mind when you’re away from home. Tapping into the live feed using the Google Home app for Android, we’re given the option for two-way communication. For those worried about privacy, there’s a green LED that glows next to the camera to indicate it’s being accessed remotely, as well as a pop-up notification that appears on-screen. Now, if you’re paranoid that someone is watching you while at home, there’s even switch on the back that effectively turns off the microphone and camera.

While it’s nice gaining access to the live feed through the Google Home app, more features can be found using the dedicated Nest app when you subscribe to the Nest Aware program. It’s pricey — subscriptions start at $5 a month and provide five days of video history — but the program offers more advanced features, such as Activity Zones, cloud storage, and facial recognition. Out of the box, it comes with a 30-day trial, allowing you to test the aforementioned functions with the Nest app. Without it, you’ll get basic alerts, which come in the form of ‘snapshot’ stills that cover the past three hours.

Despite how limited the stock features might be, there’s still something worth appreciating with the Nest Hub Max. Even when we’re away, it’s nice to know we can keep tabs on what’s happening at home. That alone should provide some peace of mind.

Google Assistant to the rescue

The underlying Google Assistant experience is intact and largely unchanged from before. When it’s on standby, it can be set to rotate curated photos or images from recent highlights in your Google Photos catalog. If we tap anywhere on the screen, we can scroll through calendar reminders, albums in our Google Play Music collection, top stores, and more. Since it’s tied to our Google account, it provides relevant search details, like those pertaining to our commute, upcoming flight, or the weather in our area.

Given the Nest Hub Max was created with automation in mind, it’s also great at accessing and controlling a wealth of connected smart gadgets. Speaking to Google Assistant is one way to direct commands, but a quick swipe down from the top bezel provides us with an overview of some of our connected devices, allowing us to turn off the lights, close the blinds, and carry out a host of other actions. The conveniences that Google Assistant provides are endless — we can even order a pizza from Domino’s Pizza, thanks to the voice-guided instructions.

Voice Match already gives Google Assistant the ability to discern our voice against other people, but now with the introduction of Face Match, the Nest Hub Max is able to recognize our face using its built-in camera, making for a more personal experience. Setting it up requires the smart display to create a model of your face, which is stored and encrypted locally. We like how the Nest Hub Max can detect our face and tailor the cards in the interface, but it works best when you have multiple members linked to the smart display. If you do, each person will get a tailored experience and interface whenever their face is detected.

Another recent introduction to Google Assistant is the ability to pause media content, like YouTube videos or songs in Pandora, using the new Quick Gestures function. It’s useful when there’s just too much noise around for the microphones to pick up your voice commands. All that’s required is for you to stare in the direction of the smart display, raise one hand, and open your fist. In our testing, it really does require you to look in the direction of the smart display, given it’s reliant on facial recognition to work. We found this feature to be accurate at a distance as well, thanks to the camera’s 127-degree field of view, which is capable of detection from up to 12 feet away.

Video calling isn’t new for some Google Assistant-powered smart displays, but the Nest Hub Max takes it one step further. The new auto-framing feature will automatically zoom and track you, which means you don’t need to be sitting directly in front of the Nest Hub Max when handling video calls. The zoom and pans are subtle, but they do a nice job at keeping you in the frame when on a call. Having the freedom to move around while doing other things is, you know, useful when you’re trying to multitask.

Google has crafted something special with the Nest Hub Max. It’s not just another smart display — it’s a definitive smart home system built with versatility in mind. The addition of a camera for video calls, peace of mind home security, increased audio fidelity, and the intelligence of Google Assistant makes it a resounding package at $229, and should be considered if you’re thinking of getting a smart display.

No. In terms of features and performance, there’s nothing that can match the Nest Hub Max’s scope. If cost is a factor, then consider the Nest Hub, which is $100 less and offers many of same basic features. If you prefer Amazon’s virtual assistant, Alexa, then the second-gen Echo Show might be something to consider.

Given the solid construction and the fact the Nest Hub Max is stationary, you don’t have to worry too much about things breaking down. In the unfortunate event it does, however, the device does come with a one-year limited warranty. New features and hotfixes will also roll out as the devices ages, providing new functionality and fixing potential software issues that might arise.

Yes. On the surface, it boasts the same basic features found in most smart displays on the market, it does a better job than most at tying them together into a cohesive, intelligent, and powerful device. Essentially, it takes everything wonderful about the Nest Hub, adds some Nest-like security features, and incorporates the richer audio performance found on the Google Home Max. This is a jack of all trades that has learned to excel.