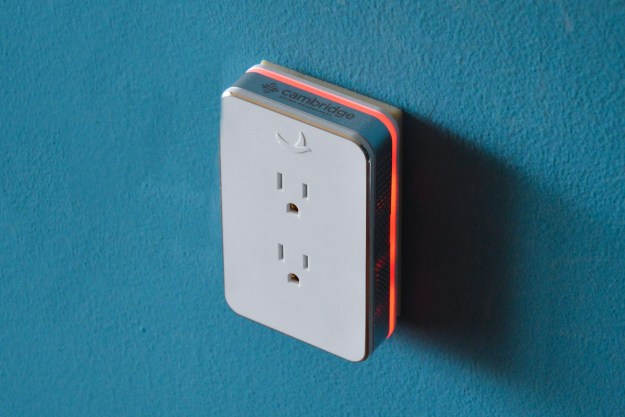 “The Nightingale will soothe you to sleep, if the price doesn't keep you awake.”

A couple nights ago, my husband and I were awakened by a low whine and a robotic female voice saying, “motion alert.” A movement had tripped the Nest camera, and thanks to an If This Then That recipe, our outlets were warning us of an intruder that was more cat than burglar.

That’s right: My power outlets were acting as intruder alerts.

Smart outlets are the main components of the Nightingale sleep system, which is supposed to envelop slumberers in white noise or soothing sounds, blocking out snoring or minor disturbances, among other features. Cambridge Sound Management, which makes the Nightingale, says having two separate devices emitting the same sound creates a “sound blanket” — here’s what it’s like to fall asleep inside one.

Shaped like a white brick, the Nightingale plugs into single-gang, 110-volt outlets, covering both outlets. (Single-gang outlets are standard width, letting you plug in two devices one above the other, while two-gang outlets accommodate two pairs of plugs side-by-side, and so on.) The Nightingale has two outlets of its own, so you can still plug your lamp and phone charger into it. It’s 4.3-by-2.7 inches tall and wide, with a depth of 1.7 inches. When it’s plugged in, it juts out about an inch. Ideally, you should place the pair on two separate walls to get the full immersive sound experience.

The plugs have LED rings around the outside that can change to a few different colors, for night light and alert purposes. Each has two speakers and can work with iOS and Android devices via Bluetooth or Wi-Fi. Together, the devices can cover a 300-square-foot room.

Once you plug in the Nightingales and download the app, you can start the setup. Once the outlets are detected, you can opt to control them through your Wi-Fi network or Bluetooth. We had a few problems getting the Nightingale to connect to our network initially and found limitations to Bluetooth connections. We couldn’t set up schedules, for example.

Next, you set the devices’ location in the app and add some descriptions of the room (whether it has carpet or hardwood floors, which will affect some of the sound absorption, and so on). Finally, you can select special conditions, such as if you have a partner that snores (or if you do) or suffer from tinnitus.

The Nightingale system works with IFTTT and Amazon’s Alexa. Some of the recipes you can set up include the Nest camera motion-sensing one mentioned earlier and one that warns you when rain’s in the forecast, with an audible alert and by turning the LED purple. A couple times when we first got the device, it seemed to emit a whining noise during the day, when it wasn’t actually on. That seemed to have resolved itself, though.

Whale of a time

The white noise sound blankets differ from each other a bit in terms of tone and frequency. There are options for kids’ rooms or hospitals, in addition to the ones made for tinnitus and snoring. There are also “soothing sounds”: lakeshore, crickets, loons, whale songs, and rainstorm. Together, there are 15 options.

Settling on one of these options wasn’t easy: My husband thought the rainstorm sounded like the neighbor was constantly using the bathroom, my cat was on high alert when the loons would cry out, and the whales sounded mournful – I thought I might have to free Willy*. Crickets were boring, so we went with the lakeshore. Aside from a random popping sound every once in a while, it offers a synthetic mix of lapping water, crickets, and perhaps breeze. The noise level adjusts on a scale of one to 10, and setting it at a six seemed to strike the balance between snore-blocking and scaring the cat. Regardless, we were always able to hear our respective alarms in the morning. The Nightingale doesn’t let you pipe in your own sounds, so you can’t listen to your favorite rainforest sounds in sound-blanket mode.

Once the Nightingale was set up on our network, it was easy to program a schedule. You can’t customize it beyond a time to start and stop; if you wanted to have it start later on the weekends, for example, that option isn’t available. You can also set the light to turn on and off at a specific time. The LED has variable levels of brightness, but the range of colors is surprisingly limited: white, red, yellow, blue, and green. That’s odd, because the light obviously has the ability to turn purple, as evidenced by the weather alert.

Right, now, you can’t do much controlling the Nightingale with  or Google Home, just turn it on or off or adjust what sound it’s playing. The ability to have the devices give you alerts with IFTTT is pretty interesting and turns it into more than just a noise machine. The rain alerts weren’t that helpful; though we live in a very rainy area, we only actually heard it once over the several weeks we tested the Nightingale. But with IFTTT, you can set up an alert for when a Nest Protect detects smoke or carbon monoxide. Thankfully these haven’t been put to the test, but giving the detector an alarm boost is certainly an added bonus.

Looking back at my sleep data from the Sleepnumber It Bed and my Fitbit, I didn’t notice any real differences from before I had the Nightingale and after. There wasn’t a huge drop in the number of times I was “restless,” for example. In fact, comparing an average week from before and after, I was restless an average of 54 minutes versus 65 minutes. Maybe my husband’s snoring doesn’t wake me as often as I thought.

As for the time it took me to fall asleep, that wasn’t different most nights, either. Perhaps it’s because I usually fall asleep to an audiobook, while my husband keeps a heater going for an hour that acts like a white-noise machine anyway. Admittedly, the Nightingale is much better at blocking out other sounds, thanks to using two separate devices to surround you with noise.

Nightingale has a one-year limited warranty.

The $299 Nightingale provides an immersive experience that might lull city dwellers to sleep with white noise or artificial nature noises.

There are dozens of noise machines out there that cost far less than this pair of outlets. (Our favorite is the $50 Marpac Dohm-DS All-Natural Noise Sound Machine.) The Nightingale is unique in that it doesn’t take up nightstand space and uses two devices to make the sounds seem as if they’re coming from all over the room.

The device itself should last a long time, and because it’s Wi-Fi-enabled, the manufacturer could come out with new features it delivers via updates – like more sound choices, for example.

I’m not convinced you couldn’t replicate the effects of the Nightingale by simply buying two, lower-cost sound machines, but it does have some smart capabilities. If you can’t have one more thing on your nightstand, it offers an elegant solution.

Updated 5/12/2017: Updated to reflect an Android app is now available.

Topics
Best indoor smart gardens
The best smart Christmas trees
How to deck out your pad with smart home gadgets for the holidays
The best smart locks for 2022
You can save $170 on the Dyson Corrale straighteners today
Should you buy a Keurig on Black Friday or wait for Cyber Monday?
There’s a huge Instant Pot Black Friday sale happening right now
This robot vacuum is $119 for Black Friday, but it’s selling fast
9 Sonos tips, tricks, and little-known features
Make Starbucks at home with this coffee maker — $99 for Black Friday
Black Friday: These Roborock smart vacuums and mops are smartest of the bunch
You can buy an Amazon Echo Dot for $15 today, because Black Friday
Save $150 on this Segway Electric Scooter for Black Friday