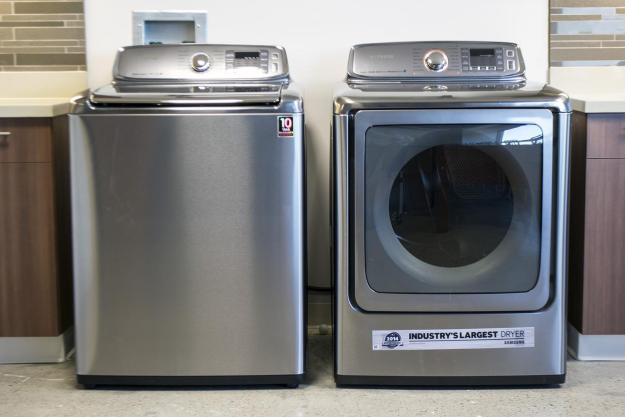 “Samsung's plus-sized appliance isn't perfect, but it offers class-leading load size and a wealth of features that anyone can appreciate.”

What’s better than drying a load of laundry? OK, trick question; as a chore, the correct answer would be “almost anything.” But you must dry anyway, so you may as well be done with it as quickly as possible.

The industry average dryer, which offers 7 cubic feet of tumbler space, can handle two, many three loads. Wouldn’t you save time if you could tackle up to four at once? That’s the hook of Samsung’s DV56H9000E(G), a gas and electric dryer that offers an industry-leading 9.5 cubic feet of internal space.

Of course, you have to pay a heavy sum for this dryer’s massive tumbler and wealth of features. The MSRP of $1,499, which is often reduced to about $1,349 at retail, puts this dryer near the top of the premium appliance market. Still, if time is money the large load size of this Samsung could prove a worthwhile investment.

Our review unit’s platinum finish offered a streamlined, modern look appropriate for an appliance selling at the top of its category. In most other respects, however, the dryer is fairly conventional, and it will appear even more so if purchased in white. Even the unit’s ample size isn’t immediately apparent as the DV56, like many smaller dryers, replicates the look and control position of a top-loader washer. This is no doubt because it is, in fact, meant to be paired with one: the excellent WA56H9000A.

This dryer is a monster. It offers 9.5 cubic feet of capacity, which ties it for the title of largest non-commercial dryer on the market.

The dryer’s design disguises the fact that it’s quite large. A space 31 inches wide, 37 inches deep and 44 inches tall is required to install this giant, and that’s with the door closed. While these figures are reasonable given the dryer’s massive load size, smaller units are at least several inches shorter in every direction. Make sure to verify your installation space before bringing this monster home.

And what a monster it is. The tumbler provides 9.5 cubic feet of capacity, a figure that ties Samsung’s own DV56H9100EG for largest non-commercial dryer available. The vast majority of dryers currently on the market offer around 7 cubic feet of space. In practical terms, the DV56’s extra room lets owners dryer up to four loads of laundry at once.

Samsung also ships the dryer with a few useful features, like a drying rack to help with items you don’t want tumbling, a reversible load door and a vent sensor to detect lint trap issues. You likely won’t see that warning often, however, as the lint trap is easy to clean thanks to its forward location and easy snap-out operation.

Like most premium dryers, the DV56 operates via a knob-and-buttons arrangement. The knob is used to select the cycle while the buttons are used to customize it. The cycles range from typical options like Normal, Heavy Duty, Perm Press and Delicates to more specific options such as Bedding, Active Wear and Towels. Several of the cycles, like Wrinkle Away, introduce a small amount of water and/or steam to achieve optimal results. This provides much better anti-wrinkle results than a dryer lacking a steam feature.

Further cycle customization includes anti-static, rack dry, wrinkle prevent and economy dry features. These work independently of the cycle itself, and so can be selected no matter what cycle you choose, though they’ll work better with some cycles than others. More basic options like dryness, heat and dry time can also be selected if you disagree with the defaults. One set of custom settings can be saved and later recalled using the My Cycle button.

So much choice may seem intimidating, but it doesn’t need to be. The default Normal cycle is perfectly adequate for most loads, so there’s no need to mess with advanced options if you don’t want to. They’re merely there for edge cases; rack dry, for example, is useful if you’d like to dry a stuffed animal or a pillow.

Understanding the controls is easy, but they respond with all the vigor of a sloth.

While the options need not be frustrating, the controls are different story. The cycle knob is a digital, rather than physical, instrument, and the dryer needs half a second to register that you’ve moved it all. There’s no way to quickly whip from one cycle selection to the next; only slow, deliberate operation works. The buttons are also slow to respond, so much so that at times we thought the dryer had frozen or become confused.

An LED screen is included to provide basic option information and an estimated dry time. Though it looks a bit old-fashioned – perhaps more so than we’d hope given the dryer’s price – the information provided is useful, clear and concise. We found the screen’s time estimates to be accurate during the normal cycle, but turning off the Economy mode (which is part of the default Normal cycle) reduces dry time by up to ten minutes more than indicated by the estimate.

Despite its price, the DV56 doesn’t offer any remote control or touchscreen features. A compatible Smart Care app is available for most Android and iOS devices, but it is used only to troubleshoot the dryer in case of an issue. The app doesn’t even connect directly; instead, users have to snap a photo of the error shown by the LED display, which is read by the app like a barcode.

The DV56 estimated that our 7-pound test load would require 44 minutes to dry on a normal cycle. This proved about right with Economy mode on, but turning it off dropped the dry cycle to just 32 minutes. In either case the dryer is fast enough given its size.

We noticed some damage to a blouse with a patterned fringe that had some loose ends from the factory. These delicate threads unraveled slightly during a normal wash, proving owners of this washer must carefully follow the instructions of garments that recommend a delicate cycle. This is not unexpected, as the delicate cycle exists for a reason, but buyers should be warned that this isn’t a dryer that lets you use the default cycle without worry. On the plus side, though, dry performance was even throughout the load, which includes a couple heavier items like a light sweater and a pair of khakis.

Buyers with sensitive ears will be happy to know the DV56 put out an average of 56 decibels, which is about the volume of a conversation. We noticed that the load seemed louder at the beginning of its cycle, with a peak of 62dB, but this may be due to the load “settling in” as it tumbles into place. Also note that items with hard or metallic objects, like buttons or zippers, will make a racket, as they do with any tumble cycle.

This dryer’s partner, the WA56H9000A washer, comes with a 10-year warranty on its driver motor, but the DV56 offers no such assurance. Owners are given one year parts and labor with an additional two year warranty on the dryer’s control board electronics. You’re on your own after that.

We feel such a short warranty is harsh given the price of this appliance, but it’s generous by the industry’s standards. Large dryers from General Electric, Electrolux and LG ship with one year parts and labor and no additional warranty on any component.

The Samsung DV56H9000A’s MSRP is $1,499, but it typically retails for $1,349. That’s a lot of scratch, no doubt, but it’s not unheard in the wide world of dryers. Several models from LG, like the DLEX8500V, are even more expensive, and the priciest alternative from General Electric, the GFDR48T3FRR, isn’t much less.

This works out to put the DV56H9000A is a strong position, as it provides tons of cycles and options and a class-leading tumbler size for a price that, while high, is not outrageous. The aforementioned GE, for example, has fewer cycles, fewer features and a smaller tumbler, so its minor savings compared to the DV56 arguably represents less value. LG’s DLEX models are in an even less attractive position on paper due to their very high prices, though consumers have reported high satisfaction and they include connected features not found in this Samsung.

Whatever the details of the competition, however, this dryer’s sheer size and wide range of features leave it on solid footing. Most competitors are smaller, some don’t offer as many features, and all of them have a slightly less attractive warranty. If Samsung had gifted the DV56 with quicker controls it might have been a perfect appliance; as it stands, it must settle with being very good.

The best and most reliable refrigerator brands of 2022
Samsung SmartThings can now monitor your home’s entire energy consumption
5 smart products for tiny spaces
The best refrigerators
HelloFresh Free Trial: Can you get your first box for free?
This massive French door air fryer is insanely cheap today
The iRobot Roomba and Braava Jet have sweet discounts today
How to sell your parents on a smart assistant
Best Amazon Echo Deals: Get an Echo Dot for $25
Keurig’s new SMART brewers offer a mind-blowing amount of coffee drinks
The best smart locks for 2022
Best security camera deals for 2022
Best Philips Hue Deals for September 2022