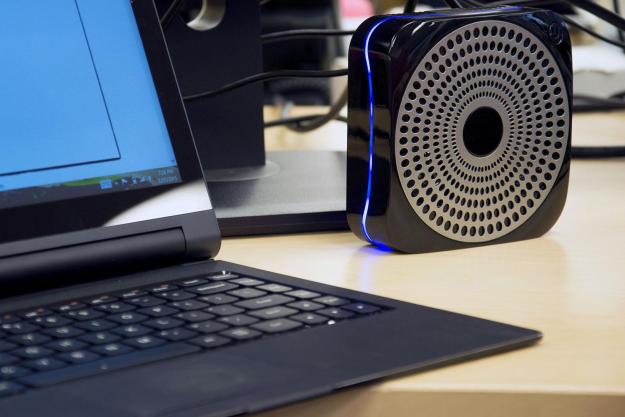 If you didn’t happen to catch Ubi during its hugely-successful Kickstarter campaign back in 2012, all you need to know is that the device is a lot like HAL-9000 from 2001: A Space Odyssey. Armed with a slew of different sensors and an Internet-connected brain, it’s able to detect when you’re in a given room, understand voice commands, and even do awesome stuff like answer questions, play music, or turn on your lights. Think of the Amazon Echo, but with the ability to actually perform tasks instead of just answering questions and playing music.

Or so the Kickstarter promised. We took it for a spin to see if Ubi is all it’s chalked up to be. Here’s what we found.

The Ubi requires no screws, no mounting plates, no hubs to plug into your router, and no assembly. You can get it up and running within a few minutes using nothing more than a laptop. It’s completely plug and play, which we really liked.

The setup process is pretty straightforward, and similar to a large number of other wireless smart home gizmos, so if you’ve already got a few installed in your house, doing this one should be a breeze. After you plug it in, Ubi becomes its own temporary Wi-Fi hotspot, which you then connect your computer to. From there, you tell it the name and password to your home Wi-Fi network, click a few buttons, and you’re off to the races.

It’s pretty simple, but we must admit that we managed to screw it up a couple times before getting it right. Make sure you follow the directions to a tee during setup — one false move and you’ve got to start the entire process over again. When you’re successfully connected, all additional configuration takes place on an online dashboard.

Ubi definitely won’t be winning any awards for aesthetic appeal. The shower drain look isn’t necessarily ugly, but with its glossy black (or white) exterior and colored LED rim, it’s probably not something you’re going to proudly display on your mantle.

It’s got that same square-with-rounded-corners shape that’s become something of a standard for smart-home gear, and looks vaguely similar to an old-school intercom box, which on some level probably helps communicate its purpose.

Under the hood you’ll find a microphone for picking up your voice commands, a pair of speakers for Ubi to speak back or play music, and even a set of environmental sensors that track ambient light and temperature in the room. All of the info the device gathers can be accessed any time via an online dashboard, or through an accompanying Android app (sorry iPhone users).

All this stuff is just fluff, though. Ubi’s standout feature, and the one you’ll use most often, is voice recognition. Right out of the box, the device is programmed to recognize a number of different spoken commands and respond to them accordingly — sort of like a dedicated version of Siri that lives in your house. Ubi can also learn new commands, and will supposedly begin to learn your voice over time.

Want to know the current temperature outside? How about the date that George Michael was born? Just ask a question and Ubi will (supposedly) tell you the answer. It can also be linked to other smart home gadgets through IFTTT, allowing you to do nifty stuff like activate your lights or adjust the thermostat with voice commands.

Or at least that’s the idea.

There’s no way to sugarcoat this. In theory Ubi is great, but in practice it’s a disappointment.

If you’re used to using a virtual assistant like Siri or Google Now, Ubi will make you feel like you’re talking to a toddler whose first language isn’t English. The voice recognition tech is extremely hit or miss.

A large part of the problem seems to come from environmental factors. If you’re watching TV or have music playing in the room, the chances of your command being recognized drop drastically. For best results, your commands need to be spoken near Ubi’s microphone in a near-silent room — which is a rare thing in most households. How often do you find yourself sitting in complete silence?

Ubi will make you feel like you’re talking to a toddler whose first language isn’t English.

And that’s just one part of the problem. Even if you speak commands slowly and with perfect enunciation, Ubi doesn’t always get it right. We ran through the list of pre-approved questions, speaking in normal, reasonably-paced, unaccented, vanilla-flavored native-Oregonian English, and it only understood us about 50 percent of the time.

Even when it does, it’s often helpless to offer anything useful. Simple questions with simple answers (like “What time is it?”) tend to work without issue, but ask something open-ended like “I need a recipe for spaghetti and meatballs” and Ubi has no idea what to do. In cases like this, it can hear and understand your query just fine, but can’t come up with a helpful answer or action. It seems that the answer-finding engine it’s built on isn’t particularly good, even when the voice recognition is.

We also would’ve liked Ubi to be a bit more conversational. If you ask a question and Ubi needs more information, it’ll ask you to clarify or be more specific — but then won’t automatically listen for your answer. To get your question answered, you have to say the trigger phrase (“OK Ubi”) again, and basically just start the whole interaction process over again from the beginning.

While we’re at it, we would’ve also liked it to be a bit faster, too. One of the first things we did after installation was link it to our Philips Hue lights so we could turn them on with spoken commands. Ubi’s IFTTT channel makes it possible to link the voice assistant to a wide array of other connected devices — but unfortunately actions that run through IFTTT take a miserably long time to actually work.

First you’ve got to say the trigger phrase to wake Ubi up, then you’ve got to speak your command and wait (slash hope) for Ubi to process your request. If that works and Ubi understands your command, the information is sent to IFTTT, processed, and then bounced back to your home network and connected Hue bulbs. In our experience, there was a three- to four-second delay between command and action, which is no faster or more convenient than just getting up and hitting a switch.

Overall, using Ubi was an unpredictable, unwieldy experience, though we must admit that over time, it did seem to improve at recognizing certain commonly-used commands. After about a week and a half of fairly regular use, Ubi didn’t require such slow and deliberate speech — at least for things we had spoken a lot. New questions still befuddled the poor little guy pretty regularly.

Unless you really can’t wait to have a voice-controlled assistant in your home, we recommend that you save your money. Ubi feels more like a beta experiment than a full-fledged voice-activated home computer. If you already have Siri or Google Now in your pocket, it’s only marginally more useful to begin with.

The device’s voice recognition tech may very well get better, and over time, as it learns your voice and the company pushes software updates, there’s a distinct possibility that Ubi might become more powerful, responsive, and reliable. But right now, it’s none of those things.