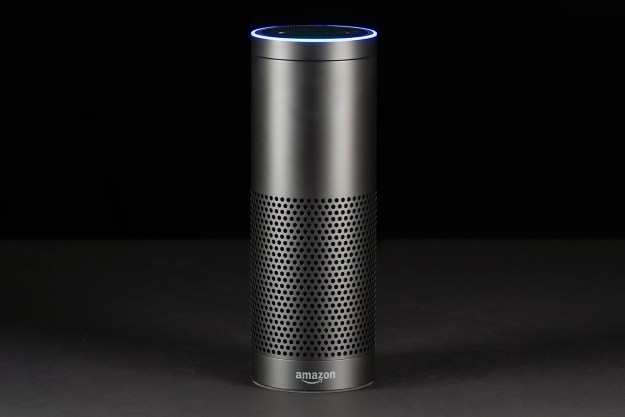 “If Amazon will quit its coy little invitation game and just straight-up sell this speaker, it will quickly become a big hit.”

When Amazon introduced the Echo speaker last November, I was both intrigued and a little creeped out. I liked the idea of a wireless speaker that did more than just play music, but Amazon’s promotional video was unsettlingly weird. There was something about the faux family’s interaction with the speaker – as if it was a family member itself – that came off like forced futurism. I know others felt the same, if only because they didn’t like the idea that the speaker would always be on, constantly listening. With the NSA constantly making headlines for overstepping its bounds and invading privacy, it’s hard not to imagine the Echo as some sort of eavesdropping device.

The Echo speaker is Amazon’s most interesting experiment yet.

Of course, the Amazon Echo wouldn’t be the first device we’ve invited into our homes that could spy on us. Our laptops, tablets and smart phones are all outfitted with microphones and Internet connections — that’s all it takes, really. Think Siri isn’t paying attention? Think again.

In the end, my curiosity got the better of me and I submitted my request for an invitation. Oh, you hadn’t heard? You can’t just go to Amazon and buy the Echo. First you have to request an invitation to buy it. Then, Amazon will review your request and only if you’re deemed worthy will you be sent said invitation. That invite is only good for 7 days, mind you, so don’t miss your ordering window, or you’re slap out of luck.

Why all the cloak and dagger? It’s a wireless speaker for crying out loud! We’re guessing it’s simply beta testing for Amazon to learn more about what Echo does well, what it does poorly, which features users take advantage of most, and what kind of features users wish they had. And enthusiast Prime members get to play guinea pigs before the masses rip it apart.

I’m here to save us all some trouble and just spell it right out. Here’s what life with the Echo (er … Alexa) is all about, and what I hope it will be like in the future.

As I’ve noted in my Fire TV and Fire TV stick reviews, I think Amazon is really getting the packaging thing down. The Echo comes in a well-appointed box with a bright orange interior, just like all the Fire products Amazon sells.

The accessories, including a voice-capable remote control, AC adapter, and batteries, all come individually wrapped for protection, and Amazon throws in a handy set-up guide along with a glossary of questions and commands Alexa understands.

I was encouraged by how heavy the Echo felt as I removed it from the box. Considering there aren’t any rechargeable batteries inside, I take this to be a sign of solid build quality. At the top of the speaker are just two buttons, a little pinhole for the microphone, and a thin ring running the circumference of the speaker can be twisted for volume. Just above the volume ring is an LED ring which the speaker employs as a feedback tool for its user. For instance, the ring glows orange when it is ready for setup, and blue when Alexa is listening.

The Echo is otherwise unremarkable looking. I did notice that its matte black finish was quick to collect oil from fingers – just another reason to go hands free and use the voice interaction feature.

Setting up the Echo is about as easy as anyone could ask for. When plugged in, the speaker instantly launches into readiness mode, acting as a Wi-Fi access point. Using a smartphone or tablet, you must temporarily connect to the Echo via Wi-Fi. The speaker will tell you when the connection is successful, and direct you to use the Echo app (which should be installed ahead of time) to finish the process. From there, all you have to do tell the Echo which Wi-FI router to connect to and feed it the password. That’s it. The Echo app will prompt you to watch an orientation video, but if you want to skip ahead, just scrub to the end and the app will let you move on.

The Echo comes pre-registered to the account of whoever ordered it. As such, the moment it connects to Wi-Fi, it has access to Amazon’s Prime music service and any music stored in the user’s music account. This will include digital copies of any CDs the user may have ordered from Amazon in the past.

The Echo can also draw on iHeartRadio or TuneIn for content, but you’ll need to enter account information in the Echo app in order for those services to be available.

To play music (or do anything else, really) you will have to start talking to Alexa – that’s your speaker’s name, like it or not. I hope you don’t have any daughters named Alexa, Alexis, Alex, or Lexie – or ever plan to – because you will be in for a frustrating time. Alexa’s voice recognition software is remarkably accurate, but she gets fooled by similar sounding names sometimes. You can change “her” name to “Amazon” instead, but that takes some of the personality out of the experience. I’d like to see some new names folded in by Amazon in the near future.

To play music (or anything else, really), you will have to start talking to Alexa – that’s your speaker’s name, like it or not.

Anyway, let’s say you want to listen to a playlist based on a certain artist; just say “Alexa” and ask her to play music by that artist. Chances are pretty good it will be available, and Alexa will confirm for you what she’s about to play. You can also be very specific about the song you want to hear, or you can ask for broad playlists based on different genres of music. If Alexa is ever uncertain, she’ll ask you for clarification.

While music is playing, you can ask Alexa to adjust volume (“Alexa, volume 6,” for instance) skip a track, repeat a track, pause, play, stop, etc. Any time you call out Alexa, the speaker will reduce the volume of the music playing so she can hear you better.

Outside of music, Alexa can answer a lot of questions. If it’s on Wikipedia, Alexa can reference it and read the first paragraph to you. We had a lot of fun asking it random fact-based questions like “how fast can a cheetah run,” “when was Starbucks founded,” and “how old are you?” Need measurement conversions? Alexa can knock that out, too. In fact, the Echo speaker ended up being a great kitchen companion, and my son swears by the Echo as a study companion.

Alexa can also tell you about the weather, what time it is, set an alarm for you, and add items to a shopping list or a to-do list. Plus, any answer Alexa gives or song she plays also shows up on the Echo app too, so you can dive deeper into that Wikipedia entry or manage your to-do list. That feature was far more convenient than I’d thought it would be, and, again, my son found homework a whole lot easier to do.

Alexa and Siri share many common traits, but there are certainly some stark differences. For instance, Alexa’s voice is far more natural than Siri’s and therefore, perhaps somewhat eerily, is more endearing. Alexa also seems to be a little more intuitive at times, as if she can connect little dots to more accurately respond to questions. On the other hand, Siri can take dictation and leverage more information sources to better serve the user. We prefer interaction with Alexa, though, perhaps because she gives better feedback. My family had only used the Echo speaker for about three days at the time of this writing, but I have to admit, we had somehow turned into that creepy family that had adopted Alexa like a family dog or cat. Maybe Amazon’s whacky commercial wasn’t so far off after all.

What Alexa can’t do now, but might in the near future

If I’m going to invite into my home a computer that’s always listening to me, trying to get me to shop at Amazon more often, then I should actually be able to shop at Amazon through the speaker. This isn’t a big ask, folks. It can access my cloud-storage account, so I believe one day the Echo may offer access to my shopping cart, or help me track existing orders.

I can’t think of any other $100 Bluetooth speaker that can do even half of the things the Echo can do.

I’d love to tell Alexa to order me a new water filter for my refrigerator, for instance, and let the speaker take care of the rest.

I’d also like to see the Echo integrate with Amazon’s Fire TV box and Fire TV Stick. It would be great to tell Alexa, “play Prison Break on my Fire TV” and be watching seconds later. The speaker can already send info to a Kindle Fire tablet, why not the Fire TV?

As long as I’m suggesting improvements, I wish there was some kind of security feature that keeps my 6-year-old daughter from placing orders for music without my permission. It was amazing how easily she figured out that saying yes to the right questions got her exactly what she wanted. Amazon does provide for a four-digit security PIN, but how hard is that to remember once you’ve heard it? I’d like to see a confirmation prompt through Amazon’s website or the Echo app.

I’m not going to dwell too long on the Echo’s sound quality, because I think that misses the point. I can’t think of any other $100 Bluetooth speaker that can do half of the things the Echo can do. Truly, this is as much a utility as it is a music playback device. With that said, I will say the Echo’s sound quality is “good enough.”

The Echo’s bass response isn’t as deep or prominent as, say, the $100 UE Mini Boom. The treble isn’t nearly as clean, either. Still, it provides a nice enough sound track for cooking or cleaning, and it can get plenty loud.

The Echo speaker is Amazon’s most interesting experiment yet. I poked fun at the marketing efforts around the Echo and its voice-driven assistant, Alexa. But once I had the speaker in my home, I couldn’t deny it was extremely fun to use. Time will tell whether the novelty will wear off and whether or not I’ll end up buying more music through Amazon as a result of the speaker’s convenience (which I think is one of Amazon’s chief goals here), but for now I can say that any Amazon user with even a mild interest in giving the Echo a try should go ahead and pull the trigger. At $99, the Echo more than earns its keep, and you can always sell it off if you lose interest – Amazon’s invitation game has sent eBay prices soaring well above $99. Just be sure to deregister the speaker from your Amazon account first.