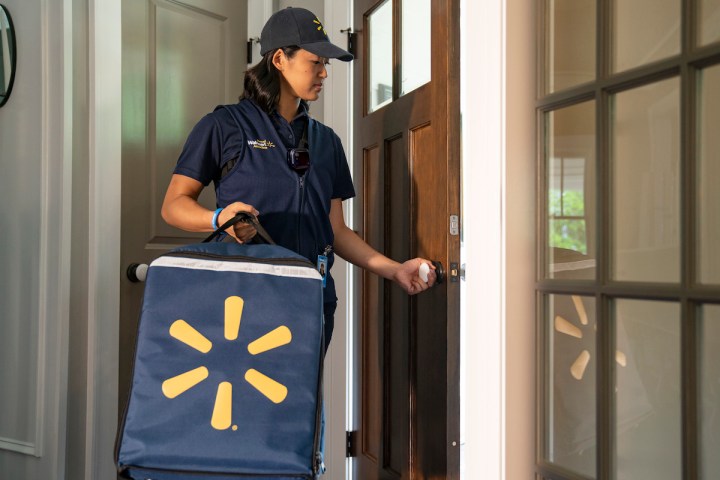 Walmart is stepping up its ongoing battle with Amazon with the launch of a new grocery delivery service designed for greater convenience, as well as to keep your orders out of the hands of porch pirates.

Similar to a system already offered by its big online rival, Walmart’s InHome Delivery service involves delivery personnel using smart entry technology to access your home before placing your ordered food items on the kitchen counter or, if necessary, in the refrigerator.

Of course, for the service to work, you’ll have to be cool with the idea of a stranger entering your home when you’re not around.

In a bid to offer peace of mind, Walmart will equip delivery personnel with body cameras that send a livestream to your phone when they arrive at your home. In theory, this means you can be sure they’re doing exactly as they should, rather than rifling through your drawers or taking a tour of your home.

Need more reassurance? Walmart says its delivery personnel will also receive “extensive training” on how to enter customers’ homes “with the same care and respect with which they would treat a friend’s or family’s home.” In other words, you needn’t worry about coming home to muddy footprints all along the hallway.

The retail giant says it also plans to experiment with accepting returns, allowing customers to leave unwanted items on the counter, ready to be collected by delivery personnel.

“The technology powering InHome Delivery combines the power of our store footprint, store associates, and world-class fresh supply chain,” Walmart said in a message on its website announcing the new service, adding, “Now we can serve customers not just in the last mile, but in the last 15 feet.”

The retailer has actually conducted trials of such a service before. Two years ago, its in-home delivery effort used third-party delivery companies, but this time around it will be using Walmart workers who’ve been with the company at least a year.

Walmart’s attempt to relaunch the service comes in response to Amazon Key — a similar service launched for Prime members in 2017 — and represents an increasing focus by Walmart on its online shopping and delivery operations. Just recently, for example, it announced free next-day delivery for general merchandise, starting in Las Vegas and locations in Southern California. As with several of Walmart’s other efforts, the move came in direct response to Amazon’s gradual move from two-day shipping to one.