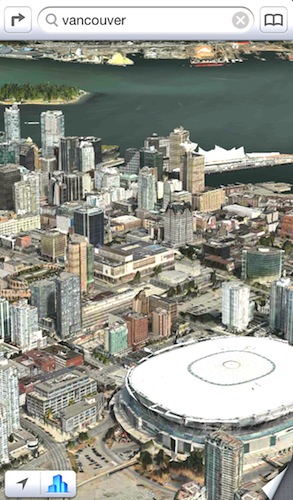 The furor over the mess that was Apple Maps has long since died down, possibly because everyone’s using Google Maps instead.

There are those, however, that dare to tap on the Apple Maps icon on their iPhone to see how it’s shaping up, and the good news appears to be that shaping up it is.

For example, according to The Loop, locations in Japan have been shown some serious love just recently, with lots of new 3D buildings in the capital to gawk at (including Tokyo Station, the Imperial Palace, and Tokyo Tower), new toll road notifications added and improvements to pronunciation of roads during turn-by-turn navigation included.

Icons and labels for freeways have been updated too, as have those for transit stations and subway lines.

The Cupertino company has also rolled out new data for plenty of other locations, with flyover imagery now showing for US cities such as Baltimore, MD; Cleveland, OH; and Albany NY, as well as for places like Vancouver, Canada; Glasgow, Scotland; and Cologne, Germany.

On top of that, expanded flyover coverage has appeared for Boston, MA; Portland, OR; Madrid, Spain; and London, England, among a long list of other places.

The maps team sure has been busy – new data for one of Apple’s most important markets, China, has also been rolled out, while globally it’s been gradually adding information for businesses such as Apple stores (of course), movie theaters, restaurants, airports and transit stops.

When Maps first launched in September 2012 – replacing Google Maps on iDevices – it was panned by many users for mislabeling locations and lacking detailed information. The outcry forced Apple boss Tim Cook to issue a letter of apology, which even included suggestions for other map apps to use while it got its own in order.

Meanwhile, an all-new Google Maps app hit the iTunes store in December, with iPhone owners wasting little time in downloading it to their handset.

To instill confidence in iDevice owners still wary of Apple Maps and to persuade them to give it another go, Apple would do well to have a special page on its site giving some details on how its work on improving the software is progressing. It could let users know which areas have been updated with what information, and outline its upcoming plans for the app.

If you’ve tried using it lately, what are your experiences? Or are you continuing to go with Google’s offering instead?

Video-editing app LumaFusion to get a Galaxy Tab S8 launch
Best Apple deals and sales for September 2022
The iPhone 14 gets a stunning transparent back with this new mod
How to see which apps are draining your iPhone’s battery life
How to buy the new Apple Watch Series 8, SE, and Ultra
The Uber hack is an outrageous tale of a teen hacking for fun
The best Samsung Galaxy S22 screen protectors for 2022
LG’s doomed Rollable phone appears on video to show us what we missed
How to transfer your SIM and phone number to an iPhone 14
Amazon’s new Fire HD 8 tablets run faster, last longer, and start at $100
Samsung Galaxy S22 buying guide: everything you need to know
Watch the iPhone 14’s car crash detection get put to the test
How to add widgets to your iPhone lock screen on iOS 16